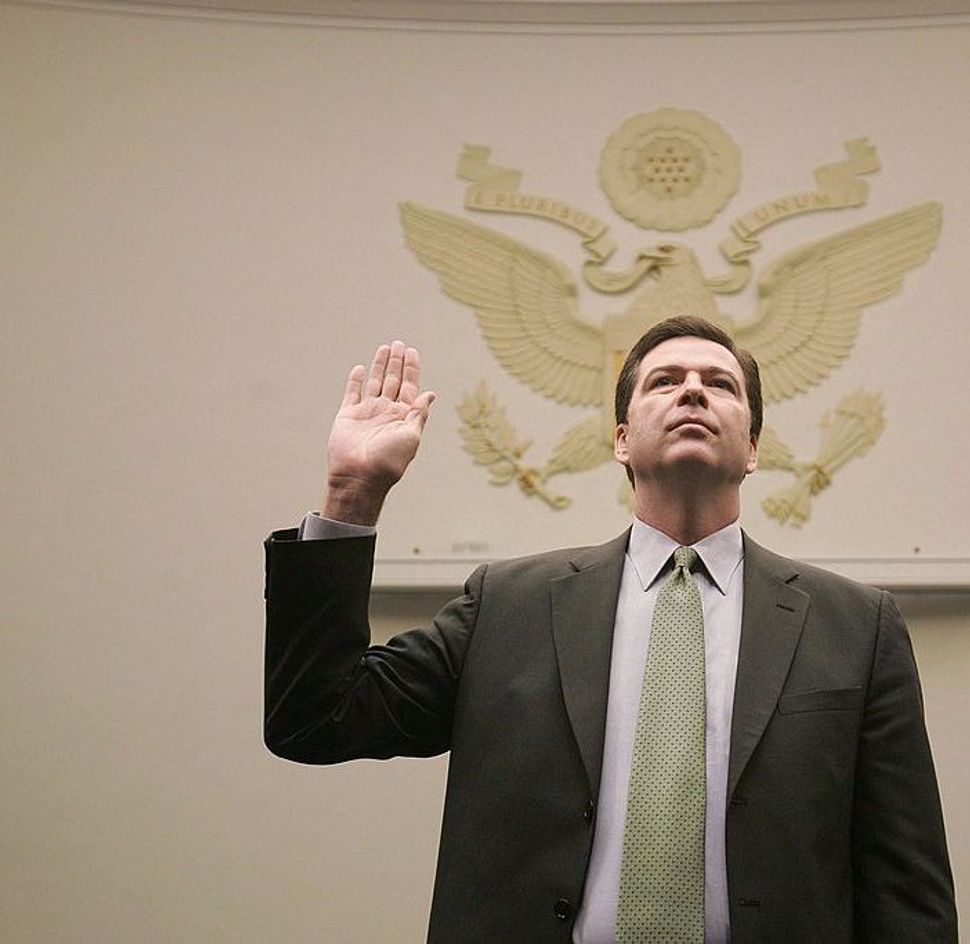 Every so often you’ll be watching some ordinary public event — a high school play, a hockey game, congressional testimony by a former FBI director — and suddenly something seems off-kilter. At first you think you’ve imagined it, but the feeling won’t go away. Sometimes it remains a mystery. At other times the truth hits you like a bucket of cold water.

So it was with James Comey’s televised appearance before the Senate Intelligence Committee on June 8. At first glance, everyone was playing their proper role. Democrats were pushing for more details, looking for that smoking gun. Republicans were hunting for holes in Comey’s testimony, seeking an inconsistency that casts reasonable doubt. Trying to show that Comey can’t be trusted.

And then it hits you: These are Republicans trying to discredit the legendary lawman, trying to show that the feds manufactured a case without evidence. This is the party that’s been crusading for a generation to unshackle the police, reduce the burden on prosecutors, make convictions easier and executions quicker. Reminding us endlessly that if the cops fingered you, you probably did it. And here they are trying to discredit the nation’s top cop and get their guy off on a technicality.

So let’s talk straight. To borrow from Republican contender Marco Rubio, let’s dispel ourselves of the fiction that there’s no evidence of collusion with the Russians by the Trump campaign. This is silly. First, those who spread this fiction are almost certainly confusing evidence with proof. There is no proof that we know of. But we can say confidence that there is evidence.

How can we say that? For one thing, we have no idea what sort of evidence might be in the FBI’s hands. The information isn’t public, and shouldn’t be. Still, from what we know it’s quite unlikely that the bureau would be conducting an expensive, time-consuming and highly disruptive investigation if they didn’t have a basis for suspecting there might be something there.

More important, there is something that the lawyers call a fact pattern — that is, an accumulation of anomalous events and circumstances, each of which calls for an explanation but, when viewed together, seem to form a pattern. The classic example is going to sleep after a day of fine weather and waking up to find the ground wet. Viewed together, those facts strongly suggest that it rained overnight. They don’t prove anything, but they do call for further inquiry.

What’s the fact pattern in the current case? First, there was an extensive, sophisticated campaign, involving and probably directed by Russian intelligence, whose goal was to disrupt the American presidential election and undermine the prospects of one major candidate, Hillary Clinton — and, at least by implication, to boost the chances of the other major candidate, Donald Trump. Second, the outcome of the election was the one the Russian disruption effort had sought: Clinton lost and Trump won. Third, during the campaign and afterwards there was a highly unusual series of meetings and contacts between members or associates of the winning Trump campaign and Russian government officials or allies. Fourth, members of the Trump campaign, transition and administration have gone to extraordinary lengths to discourage investigation of the fact pattern.

These efforts include lying about or concealing meetings and other facts; disparaging the individuals and agencies conducting the investigation; repeatedly calling for the authorities to move on and focus instead on the forward looking Republican agenda that “the American people” want to see implemented; and belittling the gravity of the underlying suspicion — which is, lest we forget, that a hostile government intervened in the heart of American democracy, our presidential election, may have managed to alter the outcome — and worst of all, that the beneficiaries of the Russian intervention may possibly have cooperated with the Russian effort, with the result that they now control the central organs of American government.

As a final note, we hear repeatedly that the Russian actions had no impact on the outcome of the election. The basis of this assertion is that there’s no indication that they successfully hacked any election machines or manipulated the vote count. But there’s been no effort to address the question of whether the Russian propaganda and forgery campaign had any impact on voters’ thinking. Given the magnitude of the Russian effort & the amount of information they poured into the US campaign, it’s hard to believe that no voters were swayed in their thinking. How many voters? Maybe just a handful of the 130 million votes cast — perhaps just 77,000 in Pennsylvania, Michigan and Wisconsin? Is it even conceivable that no minds were changed?

Nothing has been proved yet. What we have now are mostly hints and suggestions. That’s why investigations occur. But every effort by the administration or its allies to derail, disparage or discourage the investigation adds one more hint a fire rages under the bellowing smoke.