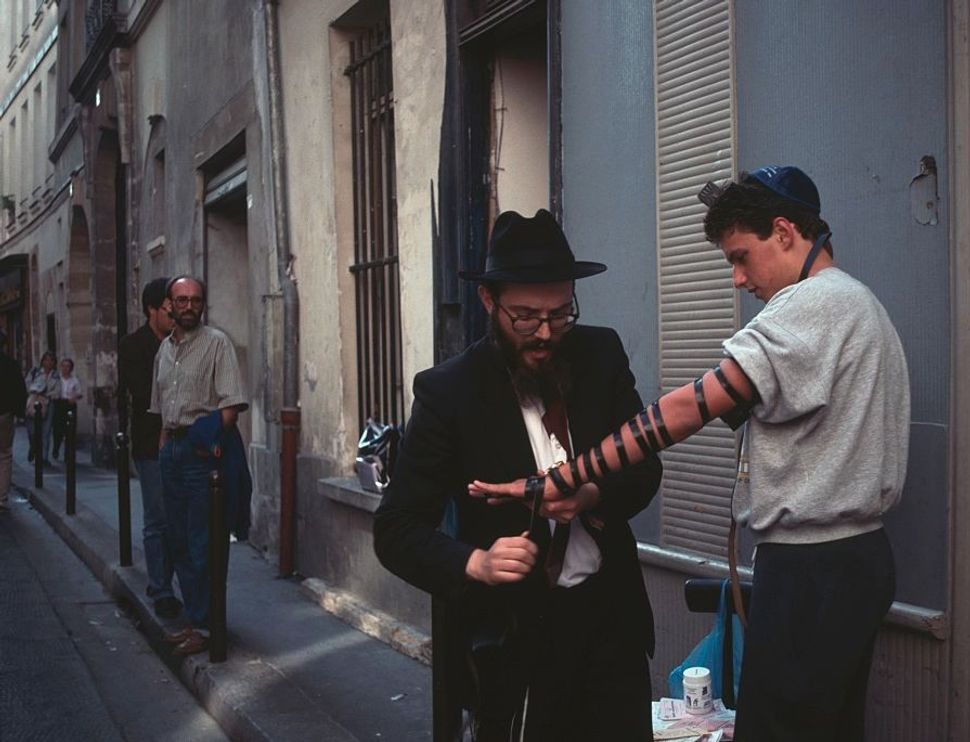 A plastic curtain separated my father from his neighbor in the geriatric emergency room. The man, who wore a velvet yarmulke and sported a beard, lay on a gurney. His wife talked on the phone in Yiddish. Then she began speaking to me: “We came here last night from a wedding, our grandson.” I said “Mazel tov.”

Why didn’t I just say “Congratulations”? Her external appearance marked her as Jewish. Mine did not. Had I said “Congratulations,” I would have kept my anonymity and my distance. But I wanted to signal that I was part of the club.

“You’re Jewish!” she exclaimed. She explained their dilemma. In the middle of the wedding of one of their eldest grandchildren, her husband — now hooked up to an IV — had felt an acute pain. He was an important rabbi. Satmar. They were determined to return home to Brooklyn’s Williamsburg neighborhood for Shabbat and the Sheva Brachot, the weeklong celebration that follows a wedding. It was Friday midmorning.

She turned to me.

“Your wife is Jewish?”

“You belong to a synagogue?”

“Yes.” Why am I trying to impress her? Why do I care what she thinks?

“No, there’s a mechitza. But it’s, uh, modern.” Good job. Throwing the Reform under the bus. You really think she’s impressed?

“Uh, well, I don’t work on Shabbat. And I don’t usually answer the phone. But I turn on lights. That doesn’t bother me. It’s still a restful day.” More frantic self-justification. Who made her queen of the Jews?

She turned to her husband: “He half keeps Shabbos.”

The hours passed. She explained that a doctor would come at 3:30 p.m. and tell them if they could leave.

“No, he lives with his partner.”

“Uh, they thought it would be better this way.” They’re not married because they live in the modern world, and in the modern world things are complicated. People get divorced and people live together without being married, and it’s okay. It’s better, actually, because people think for themselves. You think every Haredi couple is better off staying together?

The hospital brought her husband a kosher meal, which he did not eat. She offered it to me, but I said no and went to the Indian deli across the street. My father’s partner had been at the hospital earlier that morning and had returned. I stayed at the deli, working into the late afternoon.

When I returned, her husband had on his hat and coat. I overheard a doctor telling the couple that he wouldn’t keep them there if they were determined to leave. The woman said they would return after Shabbat.

There was only one problem: the paperwork. No one had signed them out. But it was close to 7 p.m.; they had to get to Brooklyn before sundown. The paperwork still wasn’t done, but they left. The nurse gave them a quizzical look on their way out.

I wonder what it’s like to be obedient to one, invisible authority no matter where you go. My loyalties are fragmented. They change depending on where I am. When I go to the hospital, the hospital becomes my authority. I follow its rules. I place myself in its care. I might complain, but I do as I’m told.

It made me resentful. Which other secular obligations do they disregard? Do they pay their taxes? Do they serve on juries? I remembered a friend telling me how he watched a Haredi man on a plane meticulously following the rules for laying tefillin while flagrantly disobeying the pilot’s instructions for everyone to sit down.

What would happen to the rabbi at home, especially given the high bar against traveling back to the hospital on Shabbat? What if his condition deteriorated? I judged them as reckless and arrogant. And I envied them.

As night fell, the hospital grew quieter. I evaded the machines surrounding my father’s bed and helped him eat his dinner from a plastic tray. An orderly came by and noticed that the gurney next to us was now empty. He looked confused, and I almost said, “The Jews left.”

Peter Beinart is a Forward senior columnist and contributing editor. Listen to “Fault Lines,” his podcast with Daniel Gordis, here or on iTunes.