Americans Are Welcomers, Not Wall-Builders 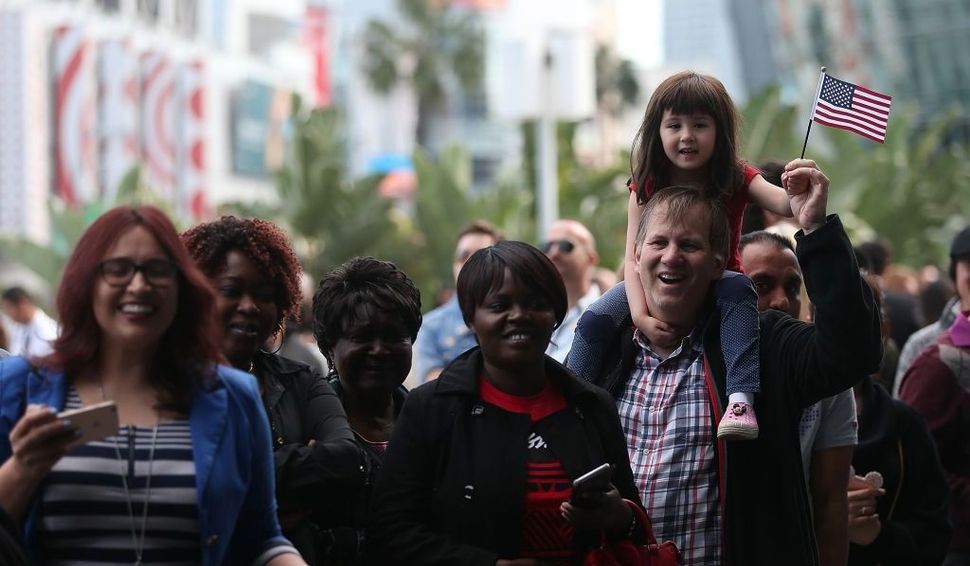 David Lubell has just been named winner of the 2017 Charles Bronfman Prize for his work founding and growing the immigrant and refugee welcoming group, Welcoming America. Below, looking to World Refugee Day on June 20, he writes exclusively for the Forward.

Although the expansion of intolerance and xenophobia in America today is disturbing and, unfortunately, familiar, there is a counternarrative that has also run through our history as a nation. This is the story of the “Welcomers,” those who have led the charge for inclusion — be it of immigrants, African Americans, Jews, LGBT-Americans, or the many other groups who have faced prejudice and persecution in our country.

For World Refugee Day, we remember that American Welcomers have always understood that if our country’s bold experiment is to work, everyone here needs to feel like they belong.

As a Jewish American, nothing makes me feel more connected to my values, and to my history, than working to welcome immigrants and refugees to this country. One of Judaism’s central teachings is to “welcome the stranger,” to offer shelter to those in need and to accept those whom we perceive as different from us. In the Torah, we are told no less than 36 times to welcome the strangers in our midst, as we are reminded that we ourselves “were strangers in the land of Egypt” during centuries of slavery.

READ MORE: David Lubell: A Mensch For Refugees And Immigrants

In the modern era, Jews do not have to peer back deeply in the rearview mirror to see our historical connection to the plight of current immigrants and refugees. Whether it was fleeing persecution in Eastern Europe in the late 19th century — as many of my direct ancestors did — or the horrors of the Holocaust in the mid-20th century, almost all Jews living today have recent descendants who have tried to flee to a new land where they could start over again.

Sadly, not all these attempts have been successful. For example, many Jewish refugees from Europe were turned away from America before and during the Holocaust, at a time when anti-Semitic and anti-immigrant sentiment in our country had reached alarming rates.

All Americans — not just Jews — must remember these lessons of history in the midst of the largest global refugee crisis since World War II, and in the face of a U.S. administration that has been attacking immigrants and refugees through both policy and rhetoric since its first week in office.

The most important place to start providing welcome is in our own communities. Over the past eight years, as founder and executive director of Welcoming America, I have helped individuals from across the country transform their hometowns and communities into models of inclusion.

Welcoming America is a not-for-profit organization that helps communities foster a climate and build institutions that are more welcoming to immigrants and refugees. To develop a welcoming atmosphere we show communities how to bring immigrants and longtime residents together effectively in dialogue within and between neighborhoods. Often facing the same difficulties, these encounters reduce fears and build mutual understanding.

Over time, we have seen our work transform communities that were once openly hostile to immigrants, like Nashville, into places where universal belonging has underpinned the city’s success.

To create more welcoming institutions, we provide municipal governments, community leaders and immigrants with the tools they need to identify — and reduce — the barriers that make it harder for new Americans to fully integrate.

For example, language is a very common barrier for immigrants and refugees when they first arrive. So we help our member communities create language access policies, to ensure that interpretation will be available in places like hospitals and government offices. Interactions with law enforcement can also drive fear within immigrant communities, particularly given the policies currently emanating from the federal level. So we help our member communities create local policies and programs that build trust between immigrants and police.

The bottom-up, community-by-community work of Welcoming America is already making a difference at the national level. Currently, more than 48 million Americans live in a Welcoming Community — that’s one of every nine people in the United States and growing. When every city and town has joined, all communities in the United States will have the tools and infrastructure they need to provide newcomers an American welcome, to address xenophobia at its roots, and ensure that all residents feel welcome and safe.

Our country is becoming increasingly diverse — remarkably so by global standards. One in four children in the United States are immigrants, or the children of immigrants. This diversity makes us stronger as a country today, just as it has throughout our nation’s history. We must make sure all our residents — including those arriving from other shores — have the tools and welcome they need to reach their full potential.

Although the challenges today are extremely daunting, I am proud to be part of the American tradition of welcoming, and to join all those who fight every day on the front lines of social change. I hope you will join us, as we push America – from the bottom up – to live up to its own high ideals of equality and inclusion, and to act as a model of successful pluralism for the rest of the world.

Americans Are Welcomers, Not Wall-Builders