David Lubell: A Mensch For Refugees And Immigrants 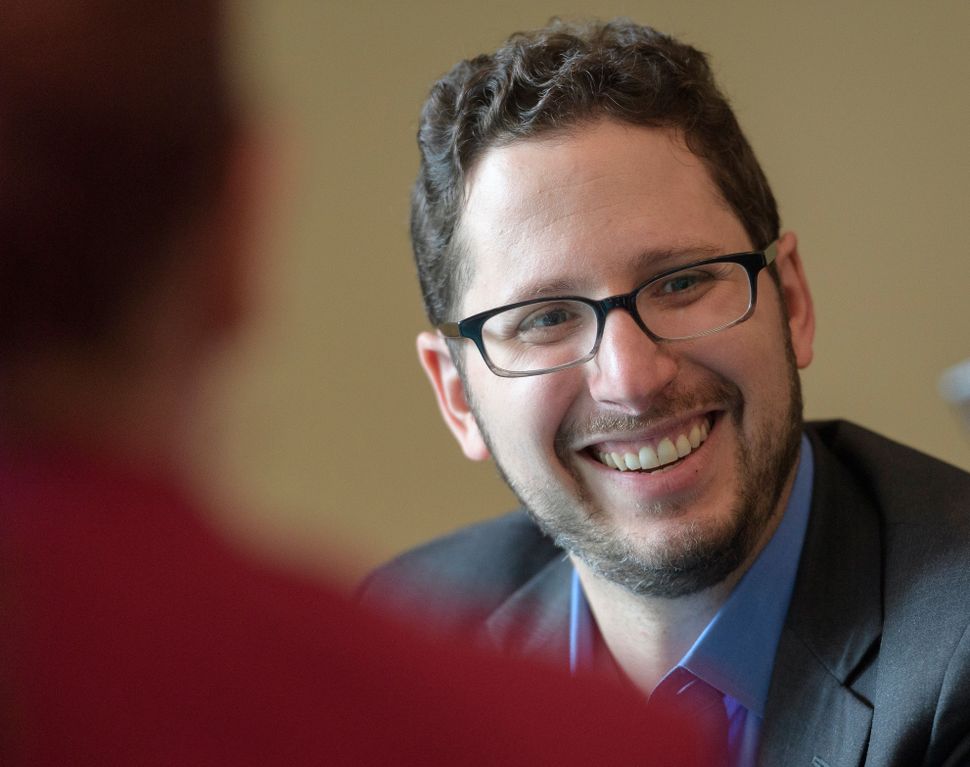 It makes a lot of sense that David Lubell is such a nice guy. His life’s work, after all, is to encourage people to be nice to one another. His success in this endeavor has led him to be named the 2017 recipient of the prestigious Charles Bronfman Prize, which “recognizes young humanitarians whose work is inspired by their Jewish values and is of universal benefit to all people.”

As founder and executive director of Welcoming America, Lubell has created a nationwide network of communities devoted to creating welcoming environments for immigrants and refugees. These are pursuits Lubell says would not have happened without his Jewish roots and upbringing.

David Lubell grew up outside Philadelphia, in a family that deeply believed in social justice and tikkun olam. In middle school, he started volunteering at a homeless shelter, and the connections he formed impacted him greatly. “I just didn’t think it was fair that these kids had such fewer opportunities than I did,” he said.

Lubell devoted himself to aiding the homeless, efforts he continued as a student at Wesleyan University. He started the student organization Students for Affordable Housing in Connecticut, which Lubell credits with leading him to “look at systemic challenges and work towards systemic solutions.” His work with primary Spanish speakers sparked a desire to become fluent in Spanish.

And so after graduating, David spent a year teaching English in the Ecuadorian city of Ibarra. The hospitality he received was overwhelming. “It taught me about the power of welcoming,” Lubell said.

He returned to the United States in 1999 and found himself in Tennessee. At the time, Tennessee was experiencing an explosion in the immigrant population. “What I saw was people not being welcomed, and after the values I learned in Ecuador, that just was not okay,” Lubell said. In Nashville, “the climate for immigrants had just gotten progressively worse,” he said. “On the state and local levels, the hate crimes and damaging rhetoric made me want to address the root causes of that backlash and figure out what was causing that fear of immigrants.” Lubell began working within communities to cultivate relationships among immigrants and long-standing residents. In 2001 he formed the Tennessee Immigrant & Refugee Rights Coalition, in Nashville.

Lubell oversaw a dramatic shift in the Nashville community’s relationship with immigrants. “Most groups that work with immigrants and refugees focus on English classes, job training, housing, which makes sense.” Lubell said. “But our whole idea is that if you put a seed in the garden, but the soil is not fertile, it’s not going to grow. So we were focused on the soil when nobody else was. We worked towards reducing the fears of longtime residents.”

The idea caught fire. Communities from as far away as Nebraska and Colorado began to hear about Lubell’s work, and they wanted to bring his methods to their own communities. “Enough places wanted to replicate the work that I could tell there was something really special about this,” Lubell said.

Lubell founded Welcoming America in 2009. He spent a year at Harvard’s Kennedy School planning the initiative, exploring perspectives on policy and social psychology, coming to understand where people’s fears of immigrants stem from.

Welcoming America’s mission was to replace fear in communities of immigrants and refugees with a “culture of welcome.” The organization would identify leaders from different sectors who wanted to support immigrants and refugees. “One of the primary activities was promoting contact because people in Nashville were not really meeting with one another and getting to know one another,” Lubell said of his original efforts. “So we would go into neighborhoods and have dinners, initiate more formal dialogue and create opportunities for people to talk, share their stories and reduce fear through actual contact with people.” 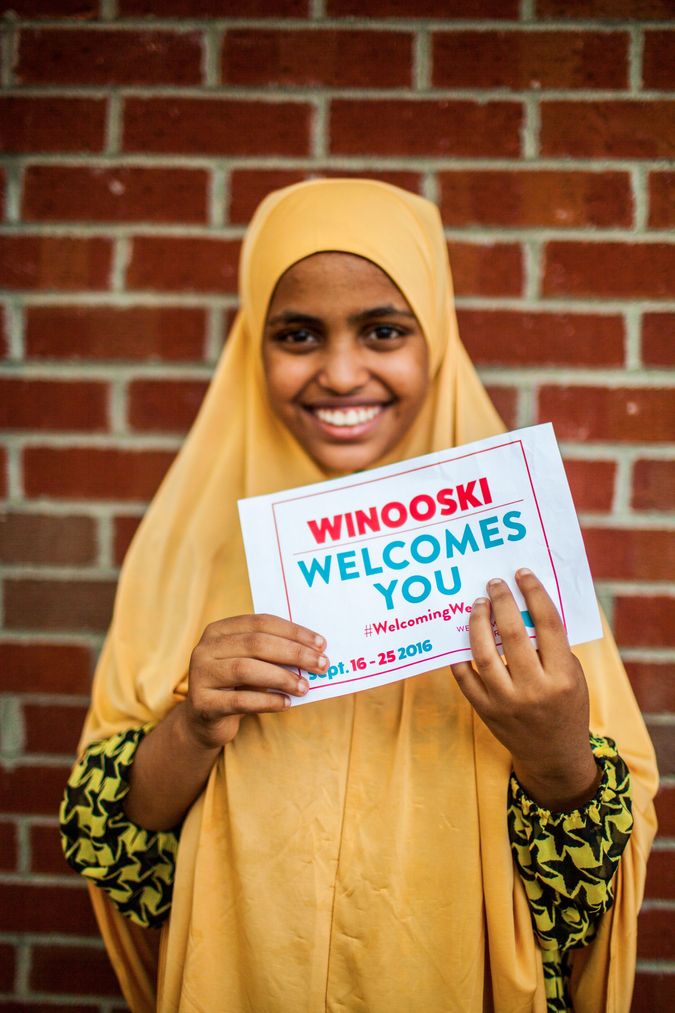 In an era of tense debate regarding refugees and immigrants, Welcoming America facilitates interactions between newcomers and long-standing residents to reduce fears and misconceptions in local communities. Image by Paul Sarne

Welcoming America has spread across the nation to encompass nearly 200 welcoming communities. The organization now works with interested communities to bring together people from different sectors of business, government and not-for-profits to identify the barriers that immigrants and refugees face. It’s what Lubell calls “the institutionalizing of Welcoming America.”

In a 2012 speech, after flying with Lubell on Air Force One, President Obama lauded Nashville’s transformation into a haven for outsiders as a model for the rest of the country to follow.

The “wind in the sails” the Obama administration provided has vanished quickly, but November’s election only increased the urgency of Welcoming America’s work. “Our communities are holding strong, and our network is growing faster than ever before,” Lubell said. “Communities that maybe didn’t feel like they had to do anything now feel like they do.”

However, Lubell has also seen how the shift in national dialogue and leadership has negatively affected local communities, with increased raids and hate crimes augmenting fear among immigrant and refugee populations. Welcoming America has taken on the challenge by shifting its attention toward communities vulnerable to hostile rhetoric, expanding its reach in conservative and rural areas as well as to the Southeast and the Rust Belt.

This hasn’t always been easy for Lubell, but he says his Judaism keeps him grounded. “Immigration is an emotional issue, and sometimes I get hate mail from people, even some anti-Semitic hate mail,” Lubell said. “It’s just hard, because you feel like you take two steps forward, but the community gets fearful again, and you take one step back. I just know that this is something I was meant to do. It’s all a part of the Jewish values I was raised with. Welcoming strangers is such an innate part of our value system as a culture. Even as a kid, I think of going to Seders and listening to the story of Exodus. We’ve been there. I think of more recent history with the Holocaust and people trying to flee to America and not always being successful because of the hostile climate towards Jewish immigrants. This is not just about [refugees and immigrants]. This is about all of us and our values as Jewish Americans.”

Welcoming America’s ultimate goal, Lubell says, is to create a tipping point where communities feel compelled to join its efforts. “We want to be in every community in America,” he declared.

Though Welcoming America has made incredible inroads on these issues, the fundamental challenges remain. But Lubell has learned over the past 15 years the value of every person’s perspective, a lesson our country certainly needs in times like these. “It’s much harder to have empathy for the people who were fearing immigrants and refugees,” Lubell said. “But that’s the crux of our work, actually. To have empathy for people who fear change, and not vilifying them for that fear, but instead working with them to overcome the challenge of acceptance and eventually embrace that change.”

David Lubell: A Mensch For Refugees And Immigrants