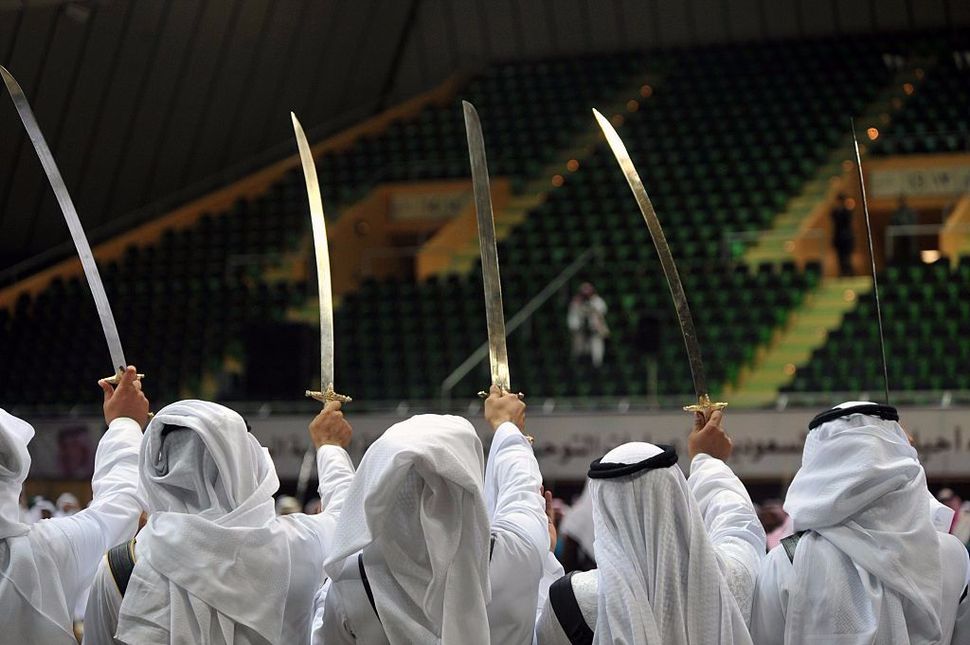 I don’t know about you, but until President Trump’s trip to the Middle East last month, I had never heard of a “sword dance.”

Trump and Secretary of State Rex Tillerson, you’ll recall, were welcomed to Saudi Arabia at the Murabba Palace, near Riyadh, where they joined a lively group of Saudis clad in traditional Arab garb and headdress in a ceremony known as the ardah, whose choreography includes the brandishing of swords in rhythm with tribal chanting and drumming.

Sword dances, I came to discover, are a feature of much of the Arab world, but also of other cultures, like those of China, Turkey, India and Pakistan.

A sword is a main image on the Saudi flag, and weapons of various sorts are prominent in other countries’ flags as well, like Angola (a machete), Kenya (spears), Oman (swords) and Mozambique (an AK-47 and bayonet). Hands clenching two AK-47s are featured on the Fatah movement’s flag, which also includes the image of a hand grenade and is graced with some blood-red Arabic text as well. (I can’t find a translation of the words but am pretty sure they aren’t “give peace a chance.”) Hamas’ logo settles for swords.

We can’t know with surety if the weapons-heaviness of those cultures implies anything deeper about them, but it wouldn’t be wild speculation to imagine that it reflects a degree of respect for, if not glorification of, violence.

But before we take pride in our own Western tradition of pacifism, we might note that the recent attack at the congressional baseball practice in Alexandria, Virginia, that wounded five, including House Majority Whip Steve Scalise, was the 154th mass shooting in America this year.

Among that day’s many other shootings was the one at a UPS complex in San Francisco that left three people dead.

Not to mention that four of our presidents have been assassinated, and attempts were made against five more (both Roosevelts, Harry Truman, Gerald Ford and Ronald Reagan).

Or that all major American cities (and many smaller ones) are home to gangs whose stock in trade includes violence.

I have never seen statistics about violent crime in Jewish communities, but it would surprise me if we weren’t greatly underrepresented among mass murderers, assassins and less prominent killers. As famed historian Paul Johnson noted in his History of the Jews, it is to the Jews that the modern world “owe[s] the idea of… the sanctity of life and the dignity of the human person… of peace as an abstract ideal and love as a foundation of justice, and many other items which constitute the basic moral furniture of the human mind.”

Despite the claims of some clerics (Christian in the past, Muslim in the present), Jews don’t murder children to use their blood for matzos – or for any reason. And there are, of course, no Jews who kill in the name of Judaism or who have exploded bombs in public places, no calls from synagogue pulpits to kill infidels.

To be sure, there have been cases of Jewish bloodshed. Israeli Prime Minister Yitzhak Rabin, of course, was assassinated by a fellow Jew, “price tag attacks” have been perpetrated by Jews, religious individuals have physically attacked fellow Jews who they feel have encroached on “their” territory. The infamous Baruch Goldstein murdered 29 Muslim worshipers at the Cave of the Patriarchs in Hebron in 1994. But violence in the Jewish world is rare, and it is never glorified.

Moreover, while the fighting instinct seems to be universal (at least among males), it, like every human proclivity, has a proper place in Judaism.

To a degree, modern society has channeled the warring streak in our natures into things like sports or politics, which usually don’t result in actual bloodshed.

But the apogee of such sublimation of the propensity to fight is much older, and it is most alive today: Torah study.

The Talmud (Kiddushin 30b) teaches that study-partners “who are engaged in Torah together… become enemies of each other due to the intensity of their studies.” And anyone familiar with the scene and sounds of a traditional beit midrash, or Torah-study hall, knows that it is nothing like what the phrase “study hall” would conjure in most minds. The room is filled with pairs of people often shouting at each other, defending the turf of their takes on a law, a reading or a concept.

The arguments are lively, and essential to the undertaking of Torah study. They are not the stuff of the personal catfights of renown in secular academia, but rather an engagement in as an exercise of mutual truth-seeking. As the Talmud continues, “the [intellectual warriors] do not leave there until they love each other.”

So while peace remains one of Judaism’s high ideals — Hillel directs us to “Be among the disciples of Aaron, loving peace and pursuing peace…” (Avot 1:12) — Jewish tradition embraces, if not physical “conflict,” an idealized intellectual and holy type of fighting.

A sage from the school of Rabbi Yishmael is quoted on the very same page of Kiddushin as giving advice about the “evil inclination,” the urges to sin that are part of human experience.

“My son,” he instructs, “If that despicable one, the evil meets you, pull him into the study hall.”

Avi Shafran is a columnist for Hamodia, is a contributor to other Jewish media and serves as director of public affairs for Agudath Israel of America.