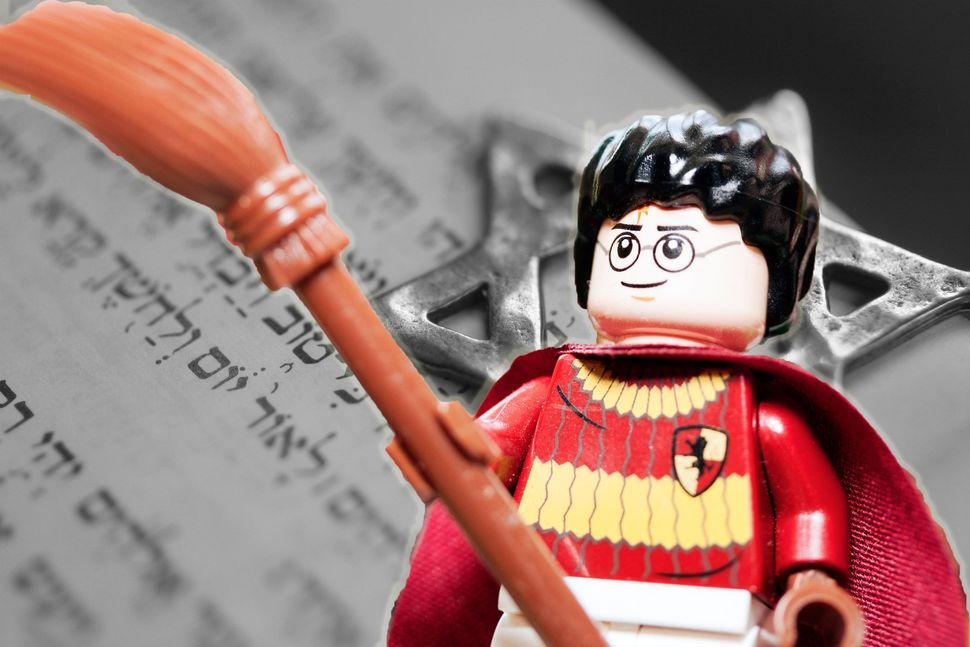 It has been twenty years since Scholastic Books made the best choice in its history by publishing a children’s novel about an orphaned boy who finds out that he’s a wizard. While Judaism generally does not make a big deal about birthdays (the only Biblical character who celebrates his birthday is Pharaoh), we are no strangers to making a holiday on the day we received a Good Book. Although author J.K. Rowling later identified one student, Anthony Goldstein, as being a member of the tribe, the Harry Potter books are not Jewish per se. Every religion can claim them as its own, and followers of no organized religion can bask in the absence of overt references to God. The understanding of humanity which lies at the core of Rowling’s writing does what religions try to do, in reflecting back to us what is most noble and ignoble in our nature and inspiring us to live a meaningful life. That is what makes Harry Potter such a perfect vehicle for presenting religious concepts through a new and appealing lens. In that spirit, here are five aspects of the Harry Potter story that most resonate with Jewish teachings.

The Best Form of Tzedakah

At the end of “Harry Potter and the Goblet of Fire,” Harry gives his Triwizard tournament winnings to Fred and George as seed money for their new joke shop. In so doing, he takes a page right out of Maimonides. The great medieval rabbi, also known as Rambam, constructed a ladder of priorities to guide Jews in the disbursing of charity funds. The highest form of charity, he writes, is to give someone a job, thereby obviating the need to accept charity ever again. From the his first day in the wizarding world, when Harry met Ron Weasley on the Hogwarts Express, he found sensitive ways to share his unexpected wealth with his less well-heeled friend. Whether it be sharing candy on the train or purchasing Omnioculars for Ron at the Quiddich World Cup, Harry managed to share without shaming. And even when he gifted Fred and George, he managed to add what we would call matan b’seter, an anonymous gift, in Ron’s direction, instructing Ron’s brothers to buy him a new set of dress robes, and say that it came from them.

Education is Life Itself

It is no accident that the Harry Potter series takes place in a school, nor is it happenstance that Albus Dumbledore declines the office of Minister of Magic to remain as Headmaster of Hogwarts. Dumbledore recognized, as does Judaism, that the cauldron from which one type of society or another will emerge is that of education. He understood that in the dramas that take place within the walls of the academy, we can observe and mold the best and the worst of human nature. In the classrooms and corridors of educational institutions a mentorship akin to parenthood takes place, featuring teachers who can mold the minds of their charges or savage them, and sometimes both. Can a Professor of Talmud be both brilliant and overbearing, artistic and sadistic at once? Ask Professor Snape. Can teachers ostensibly dedicated to the same educational goals have vastly different ways of achieving them and use every lever of power within their reach? Ask Rabban Gamliel and Rabbi Yehoshua, whose Talmudic disputes led to humiliation, deposing, and, finally, reconciliation. Neither the study hall nor the Castle of Hogwarts is a place for the faint of heart.

Becoming Our Own Role Models

The seven Potter novels can be seen as the attempts of a boy, orphaned at the age of one, to overcome the loss of his parents, finding and losing role model after role model, until he steps into his father’s shoes and becomes a father figure to others. The search for James and Lily leads Harry to his sympathetic teacher, Remus Lupin, his brash godfather, Sirius Black, and, of course Albus Dumbledore. But when the final showdown comes with Lord Voldemort, all his father figures are dead. He must step up – “It’s got to be me,” he says. When the battle is won, everyone in the castle wants to touch and to speak with their savior, their new father figure.

In this sense, Harry’s story closely resembles the Joseph narrative in the Book of Genesis. Joseph, ripped away from his father at the age of 17, ultimately becomes the father-figure of his entire clan, including his own father, whose survival he ensures during famine. He forgives his brothers and re-knits the family, even telling old Jacob that God had “made me a father to Pharaoh.” As Harvard philosophy professor Robert Nozick writes, “Being grown-up is a way of no longer being a child, hence a way of relating to one’s parents not just by acting as their parent, but by stopping needing or expecting them to act as yours; and this includes stopping expecting the world to be a symbolic parent, too.

It is Our Choices Which Determine Who We Truly Are

These words are arguably the most famous quotation in the entire Potter canon. One very kind fan of my “Unofficial Hogwarts Haggadah” expressed her gratitude by crocheting a kippah for me with the Hebrew translation of this adage as its border. Dumbledore said it but Harry lived by it. The words imply several things. First, it is not your birth or lineage which confer status upon you, as the Malfoys thought, but your own accomplishments, earned through wise choices. There have been schools of thought in Judaism that placed great stock in yichus, or lineage, even when not accompanied by deeds. These have been opposed by the words of the rabbis who declared, “A scholar who is a bastard takes precedence over a High Priest who is ignorant.” One of a genre of put-down lines quipped that yichus is like a potato — the best part is in the earth.

Second, our moral status is not the mental image we have of ourselves, but the actual person we become after we are tested and pass the test. Righteousness must be actualized in the real world. Only after Abraham passes the test of the binding of Isaac does the omniscient God say, “Now I know that you are God-fearing.” It wasn’t enough that God knew it before.

Finally, the underlying principle of our lives is personal responsibility, based upon free choice. Even when we claim not to have a choice, we actually do. When Peter Pettigrew claims not to have had a choice but to betray Harry’s parents, since Voldemort would have killed him, Sirius Black tells him, “Then you should have died.” Harry decides to fight Voldemort not because of the prophecy that predicted their showdown, but because of his free choice. Behira hofshit, freedom of choice, is the foundation of Judaism’s call to religious responsibility. “All is in the hands of Heaven, except for the fear of Heaven.”

Evil Must Be Battled in Every Generation

“While you may have only delayed his return to power,” Dumbledore tells Harry, “it will merely take someone else, who is willing to fight what appears a losing battle next time — and if he is delayed again and again, why, he may never return to power.” Dumbledore may just as well have been quoting from the Passover Haggadah, which reminds us that “in every generation they rise up against us to destroy us.” Denying that the Dark Lord had returned, as Minister of Magic Cornelius Fudge did, only put the Ministry at a greater disadvantage in combatting him. Those who thought that World War II had seen the last of anti-Semitism were likewise deluded.

Can evil ever be finally and totally defeated? The Biblical answer is yes. There will be a day when “Death is swallowed up forever and the Lord, God, wipes the tears from every face.” In the wizarding world, Harry does, indeed, vanquish Voldemort at the end of Book Seven (spoiler alert?). Yet the epilogue of the series leaves us wondering if there might be room for a sequel. And don’t even get me started on the play…

Rabbi Moshe Rosenberg is the spiritual leader of Congregation Etz Chaim of Kew Gardens Hills, New York, and a Judaic Studies educator and JudeoTech Integrator at SAR Academy in Riverdale, New York. He is the author of The Unofficial Hogwarts Haggadah, and is currently working on the expanded second edition of Morality for Muggles: Ethics in the Bible and the World of Harry Potter.