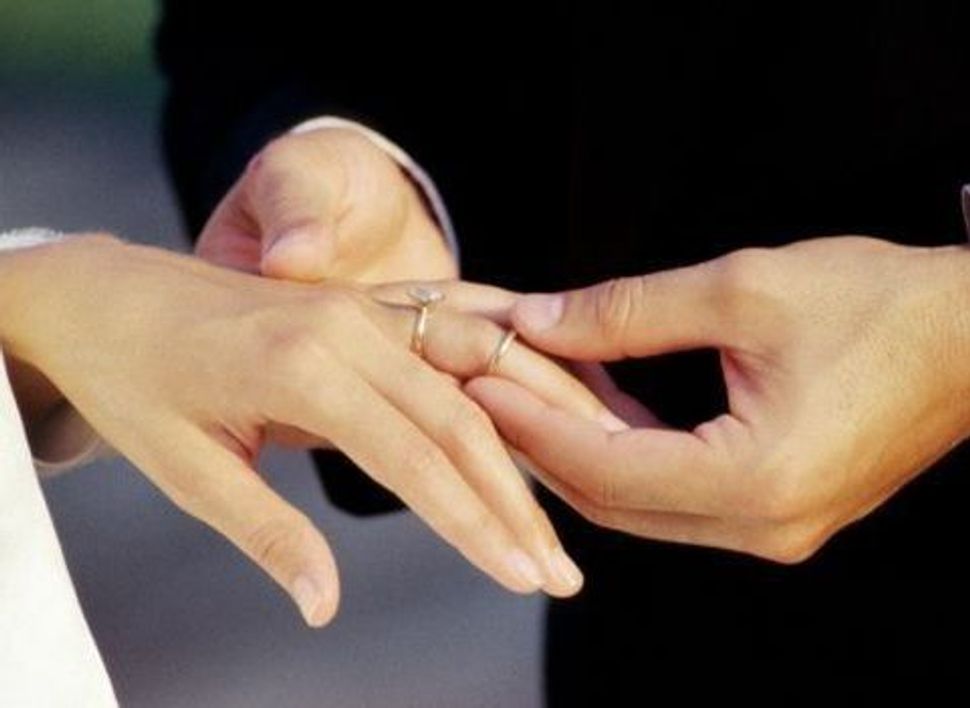 The debate over intermarriage — once again erupting across the Jewish community — has too easily slipped into a binary equation. Opinions are shared, statistics are drawn as weapons and institutions often double-down. Sides are chosen, often reduced to a simple yes or no:

But none of these responses honor the complexity and gravity of what we and our people are experiencing. None fully balances the conflicting obligations presented by those whom we serve, and the tradition we have inherited and pledged to protect and help flourish. And none reflects fidelity to a dynamic rabbinic Judaism, which designed itself to handle such matters not by ignoring the internal and external conflicts, but by integrating them into our religious decision-making.

As new models continue to emerge and 21st century responses to 21st century challenges finally gain traction (regardless of their final decisions), we’d like to add a few ideas for consideration.

The uniqueness of our own personal stories gives us hope. We are honored to serve as rabbis of Adas Israel, one of the largest Conservative synagogues in America. The synagogue — which is growing quickly — rarely experiences a quiet moment during the pretty traditional and typical rhythms of its week.

One of us is the product of a classically defined intermarriage: One Jewish parent, strongly identified, and one Christian parent, strongly identified. One of us grew up immersed in Jewish life; the other experienced a more diverse religious home. Yet today we are equals, serving equally, teaching equally. We have arrived at this outcome not despite our separate upbringings, but because of them.

Our congregation is diverse in every way. In fact, some of our diverse families are the most active and engaged in our synagogue’s daily life. Families with Jewish and non-Jewish partners serve on Adas Israel’s board, in our Sisterhood, on our bereavement committee and as daily minyan leaders. They also, contrary to public perception, span in age, from millennials to Baby Boomers and everyone in between.

We, as Jews, have historically judged the intermarriage question using couples as the barometer of success or failure — as the measure of some unspecified (or vaguely articulated) goal called “continuity.”

But instead of seeing each couple as a crisis, as a problem to solve, what if we saw our diverse families as one cornerstone of our Jewish future? A future so distinctly Jewish – grounded in Jewish insight, wisdom, boundaries, and values – such that it remains within the parameters of our historical and communal narrative, but so universally recognizable as sacred, that people see doorways, not thick walls.

Maybe it’s time to redefine in-marriage. That doesn’t necessarily mean redefining the specifics of a Jewish wedding to include any religion, or multiple religious ideas, but rather recalibrating the way we experience the ever-dynamic nature of Jewish families. Today, in-marriage ought not only be defined as two Jews who marry. It can also be a family living Jewishly, with one Jewish partner, but who chooses to reside within a Jewish community and make it the primary religious blueprint for developing their spiritual and communal lives.

This isn’t a call for a policy shift from within the Conservative movement. Nor do we have plans to begin officiating at weddings between Jews and their non-Jewish partners. But the paradigm with which the conversation takes place is relevant, insomuch as it draws lines around who sees themselves as part of that conversation.

It’s not that the debate about the roughly 30 minutes under the wedding canopy is irrelevant. We know it matters. But perhaps the overall cradle in which it is being held ought to shift in order to reconfigure and broaden the ideals that are the premises of the larger deliberations. This may not change policy, but it could change the trajectory of how our communities are enriched and expanded.

Once there were two merchants who were traveling together. One of them held a bolt of silk material in her hand, while the other held some pepper. They said to each other: “Let us exchange our merchandise.” One took the pepper and the other took the silk. What one of them had previously owned was no longer hers, and that which the other had owned was, likewise, no longer his. With Torah, however, this is not so. If one person studies Tractate Ze’raim (seeds), and another Tractate Mo’ed (holidays), and they instruct each other, each possesses knowledge of both. Truly, is there any merchandise more valuable than this? (Tanhuma, Parashat Terumah, Ch. 2.0)

Torah isn’t so fleeting as merchandise that it might disappear under new and shared ownership. It’s our primary and ever-expansive vessel, in which we can thoughtfully and lovingly integrate today and yesterday, tomorrow and yesteryear.

“Torah should seem as new to you as if it had been given that day, says the Midrash. One can find the word that has been waiting for this hour to be revealed only if he faces the challenge of each new situation in the history of the generations of Israel and attempts to deal with it in intellectual and ethical honesty.” (Not in Heaven, 178-9)

So what are the questions we ought to be asking ourselves – leaders of religious institutions, professionals and lay-people together – as we move forward? Let’s ask: Who is this couple in front of me? Why did they choose to begin their journey here? What do they bring with them from the past? What potential might they hold? Is it not possible that they could give birth to and raise the next great Jewish thinker or leader? Or even the Messiah? We have to believe this is possible. Not because we are naive, but because it is true.

And one more question: what might they be asking of our tradition and its clergy? It might not be “please bend the tradition to my will,” but they might actually be saying, “where do I fit into the spectrum of Jewish life? Where is my makom, my home, my holy space?”

It’s no longer true that intermarriage equals a rejection of Jewish wisdom and community. Although people and the decisions they make about their lives may look different than they did a few generations ago, or hundreds of years ago, people still want in. Their heritage matters to them. They want sacred pathways planted in something bigger than themselves – at once ancient and modern – that meaningfully guide them and ground them in a quickly shifting world.

There is no simple answer to the complex and shifting modern Jewish world. What we should offer as clergy in the name of our tradition is a sophisticated, challenging, and distinctly traditional path as an answer to today’s more pertinent questions; not watered-down or lacking responsibility, but rather spilling over with loving guidance and ancient wisdom to all who seek it.