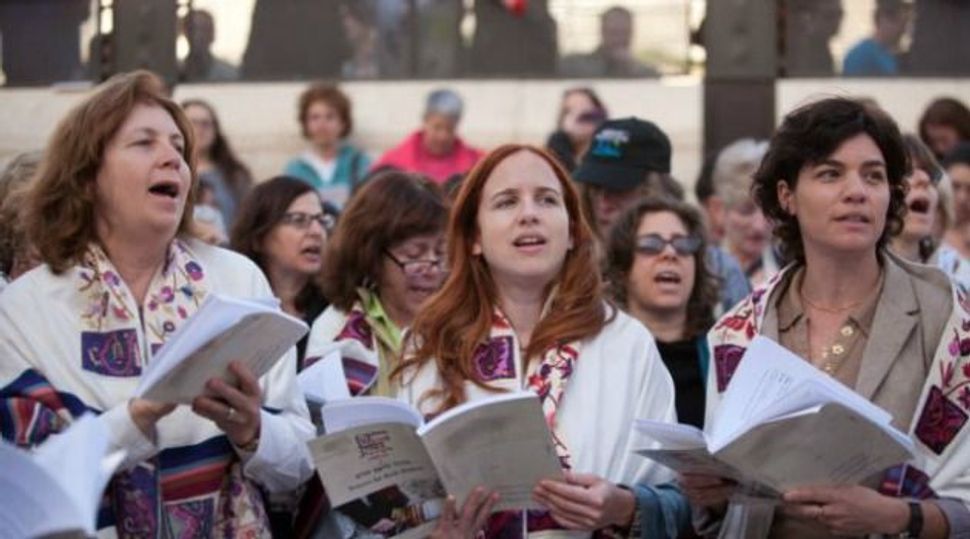 Supporting the Fight: Female lawmakers joined the Women of the Wall protests at the Western Wall in Jerusalem. Image by haaretz

Maybe the Israeli government’s decision to kill the Western Wall agreement should be viewed not as a humiliating slap in the face, but as an opportunity to redefine our goals as non-Orthodox Jews. Liberal American Jews, like myself, felt so hurt and angry that the Israeli government reneged on its promise to create an egalitarian prayer space at the Western Wall that we have not been able to take seriously any of the claims of the ultra-Orthodox, who pushed for the cancellation.

One of these claims, which may have some merit, is that such a space was unnecessary because the current egalitarian prayer space — at the nearby Robinson’s Arch complex — tends to be left empty much of the time. Liberal Jews have not made it their business to visit it with regularity. Yes, this could be because it is something of a non-space, a small, floating island of wood over fallen rocks, not the eternal unshakable stone that is the Kotel. But the plans that the agreement called for would create a space 10 times as large, almost half the size of the current Western Wall. Would we fill it on a continuous basis? Would we ever fill it? Even after the initial excitement wears off?

Perhaps the answer is yes, or perhaps it does not matter and it’s an issue of principle and right. Nonetheless, we are presented with an opportunity for self-examination in considering the reasons that we might not.

When the Haredi community says, “Leave our Kotel as it is,” they are attaching themselves to that place and its history. They can much more honestly claim a connection to the Holy Temple than we can. What do we liberal Jews care for animal sacrifices, the main thing that happened there? What do we care for the patriarchal, hierarchical, hyper-organized religion that was based there? For military conquest, which the Wall has been connected with since 1967? Even for the notion of a god who reads all our notes and makes our wishes come true? Don’t we hate all of that?

Of course, we find our ways around those problems and still come visit the Wall every few years and enjoy connecting with the spirituality of the place and its symbolism, both ancient and modern. But many of us have to go through hoops to reach that place of appreciation, reconnecting with a part of ourselves we parted ways with long ago, the part of us in whose imagination God looks a bit like Santa, reading our notes in which we ask for a new Sega Mega Drive. Truth be told, even that part of the Kotel experience might be in jeopardy. After all, will a new egalitarian space have cracks between the stones to allow worshippers to insert their notes? And if not, aren’t most non-Orthodox Jews going to keep going to the nonegalitarian Wall when they go?

Even if there will be big cracks between the stones, and plants growing out of the cracks higher up, just like the current Wall, will we really come en masse to celebrate it once we’re done celebrating the fact that we can celebrate it there in our own unique, contemporary way? Will we come there to pray? Finding an egalitarian minyan in Brooklyn, Liberal Judaism’s World Headquarters, that meets more than once a week is close to impossible. Will there be one in Israel, where Reform and Conservative movements are tiny in comparison?

But wait, you might say, the Wall is less about God than about history. It is actually a living symbol of one of the notions of Judaism that means the most to the secular Jewish community — namely, survival. It survived thousands of years, just like us, including national disasters and ongoing attempts at annihilation. However, it appears that precisely that aspect of our peoplehood means less and less to young, liberal Jews. Even the symbolism of reconnecting with our past, which burst to life when paratroopers of the Israel Defense Forces reached the Wall in 1967, is now far from pure. Many liberal Jews now connect that symbolism to the dirty and cruel half-century-long occupation that began at that moment, rather than to Jewish survival and revival. They have a complex relationship with the place even before religious questions pop up.

But maybe, instead of focusing on our rights and desires, this is the time when liberal Jews should be thinking about new holy places that are more in line with our worldview. Maybe we should elevate different places with ancient power that have more resonance and will draw more of us to them for worship. Somewhere with less nationalist context, less inequality, more universalist love.

Let new places emerge out of our people’s imagination in a way that will attract celebrations, curiosity and ritual. Let us learn from the Orthodox how to turn an imaginary whim supported by flimsy history into truth. Let us reinvigorate the notion of what prayer is and where we perform it. Let us remind ourselves that the Judaism we practice is beautifully post-Temple: decentralized, democratic, abstract, not dependent on any particular place. And let us not be afraid to say this to the Israeli government: You do not represent us.

Misha Shulman is the founding director of New York’s School for Creative Judaism.