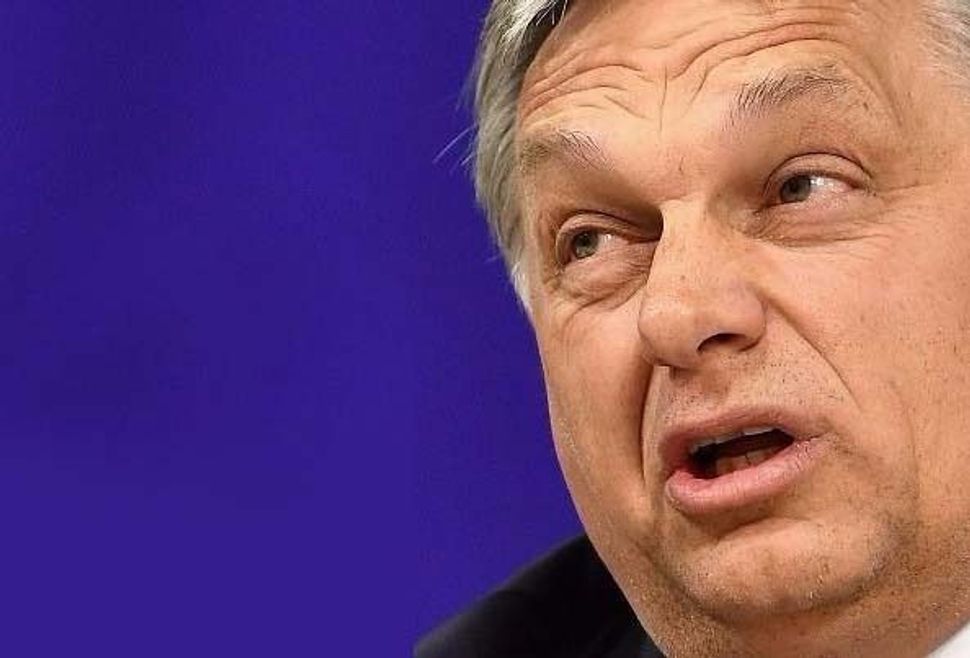 Israeli Prime Minister Benjamin Netanyahu went to Budapest earlier this week and got out of Hungarian Prime Minister Viktor Orbán a promise that, to paraphrase Susan Sontag, never again will Hungarians be allowed to kill Jews in the 1940s.

The government of Hungary committed a “sin” when “it did not protect its citizens of Jewish heritage,” Orbán said, as if the Holocaust were equivalent to coveting thy neighbor’s wife. During World War II, “we chose collaboration with the Nazis,” he continued, ignoring that Hungary had institutionalized anti-Semitism well before 1939 and that its authorities organized the round-up and mass deportation of Jews to Auschwitz in 1944.

“This can never happen again,” Orbán told Netanyahu. “In the future, the Hungarian government will protect all its citizens.” This past month alone, that “protection” has encompassed raiding the Aurora Jewish community center in Budapest and running an anti-Semitic poster campaign against the Hungarian-born financier and philanthropist George Soros. In the same press conference, Orbán said that refugees constitute an “external, artificial influence” on Hungary’s “current ethnic composition.” It is clear his reassurances cannot be taken on face value.

Indeed, since 2010, far from coming to terms with Hungary’s past, Orbán has conducted a campaign that Brookings Institution visiting fellow James Kirchick described in his book “The End of Europe” as “distortion,” pushing a narrative about the Holocaust “that minimizes Hungarian culpability” while casting Nazi-allied leader Miklós Horthy as a “selfless defender of national independence.” Orbán recently called Horthy an “exceptional statesman.” Budapest’s Freedom Square is today home to a statue of Horthy as well as the Memorial to the Victims of the German Occupation, both insults to the suffering of Hungarian Jewry.

Orbán has also tightened his grip on Hungarian civil society, targeting NGOs as well as institutions in the media and academia—including the Soros-backed Central European University—with draconian laws threatening their independence. Refugees are subject to abusive laws and policies tantamount to the criminalization of seeking asylum, while Orbán’s approach to foreign relations has led to an embrace of Vladimir Putin’s Russia as a political and trade partner, undermining European policy on sanctions.

Hungary under Orbán is mutating into an illiberal democracy, despite not only being a member of the European Union but also, even more embarrassingly, a net recipient of European funding. In 2015, for example, Hungary contributed €946 million ($1.09 billion) to the EU budget, while receiving €5.63 billion ($6.48 billion) back. It is certainly in Europe’s interest to lift up Hungary, but Orbán has been allowed to enjoy the benefits of Europe while flagrantly ignoring his obligations to human rights, treating it as if it were an ATM.

Europe’s leverage against Orbán is weak, and to cut EU funding would be a form of collective punishment against all Hungarians, but there are steps that could be taken to send signals and apply pressure. Already, the EU’s executive branch has initiated legal proceedings against the Hungarian government for its laws that target NGOs and universities. In the future, the transnational center-right European People’s Party could suspend or expel Orbán’s political party, Fidesz. The so-called “nuclear option” would involve sanctions and the suspension of voting rights.

The EU works best when it operates consensually, with an emphasis on dialogue and cooperation — one reason why European leaders have been reluctant to move against Hungary. When Germany proposed earlier this year to peg EU funding to compliance with norms regarding democracy and the rule of law, European Commission President Jean-Claude Juncker argued this would be “poison for the continent.”

If the EU appeared to initiate hostilities, it would certainly play into Orbán’s hands, as Brussels, much like Soros, has been a useful foil in his ultra-nationalistic campaign against minorities, refugees and critical institutions within civil society. Here, Hungary’s Jewish community must also be considered, for Orbán’s already-empty commitment to Netanyahu to “protect all [Hungary]’s citizens” will mean even less should further ultra-nationalism beget greater resentment of and antagonism towards minorities and the perceived metropolitan elite.

The EU must think and tread carefully concerning its next move, but events in Hungary are no longer something they can skirt around. Central Europe’s reintegration into the European family of nations was one of the EU’s great achievements — leading to, another other things, a relative renaissance for Judaism beyond the Iron Curtain — but now Hungary is devolving into an illiberal democracy on its watch. The time for mere passive observance is over.