When It Comes To College Admissions, Asians Are The New Jews 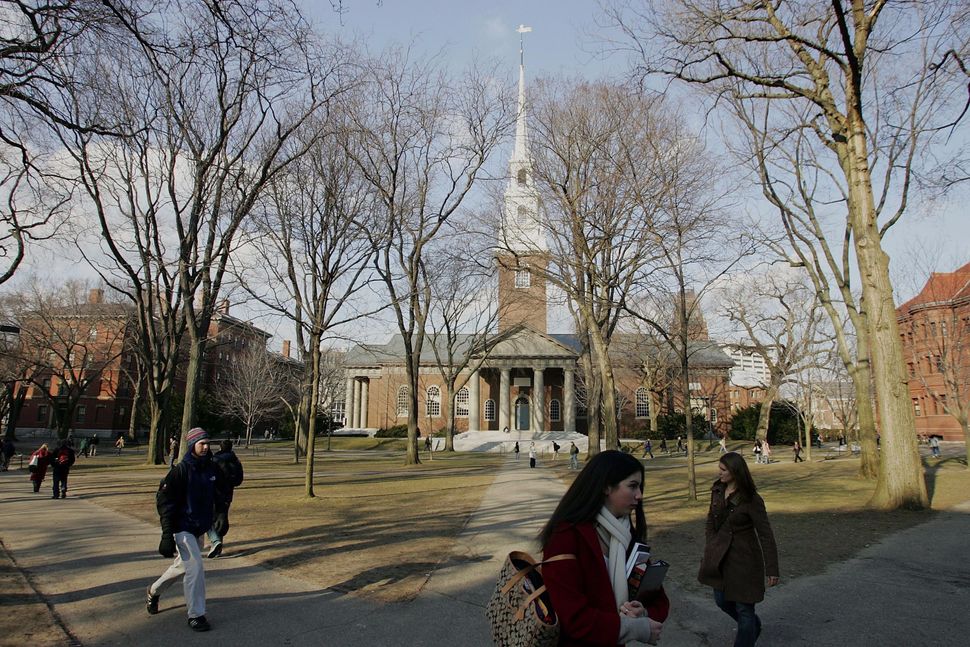 Last week, the New York Times revealed that Attorney General Jeff Sessions is investigating a civil rights complaint against Harvard University. The complaint, filed by a coalition of 64 Asian-American organizations in 2015, alleges a pattern of bias against Asian Americans.

“Over the last two decades, Asian-American applicants to Harvard University and other Ivy League colleges have increasingly experienced discrimination in the admissions process,” reads the complaint. “Many Asian-American students who have almost perfect SAT scores, top 1% GPAs, plus significant awards or leadership positions in various extracurricular activities have been rejected by Harvard University and other Ivy League Colleges while similarly situated applicants of other races have been admitted.”

The lawsuit alleges that Harvard and others are covertly using race as a factor in admissions in order to keep Asian Americans out. A separate Princeton study found that students who identify as Asian need to score 140 points higher on the SAT than whites to have the same chance of admission to private colleges.

In briefs to the Supreme Court, Harvard defended itself, claiming that its reliance on subjective admissions criteria is a model of assessment that does not rely on quotas.

But the subjective criteria are precisely how Harvard once enforced its quotas against another minority. Indeed, for Jews, this scenario is all too familiar.

As I reported in City Journal last year, Asian Americans are facing the exact same discrimination that was once used to keep Jews out of Harvard. In both cases, when an upstart, achievement-oriented minority group was too successful under objective admissions standards, the response was to instead emphasize highly subjective and “holistic” measures of “character” and “leadership” under which the group’s enrollment numbers plunged.

The anti-Semitic history is mind-boggling. Beginning in the 1890’s, Harvard began to make entry requirements more rigorous. This shift to a more academic emphasis coincided with the arrival in America of increasing numbers of Jewish immigrants, and Jews quickly began to make up a significant share of the student population. Harvard was already 7% Jewish by 1900, a number that grew to over 21% by 1922. If you think about the fact that in 1918, only 3.5% of Americans were Jews, you can see the disproportion.

This trend did not sit well with some Harvard alumni and staff. As one alumnus wrote after attending the Harvard-Yale game, “To find that one’s University had become so Hebrewized was a fearful shock. There were Jews to the right of me, Jews to the left of me.”

These concerns found a sympathetic ear in President A. Lawrence Lowell. In 1922, he proposed a 15% cap on Jewish enrollment, along with other policies to limit “Hebrew” admissions. The proposals included emphasizing subjective measures of “aptitude and character,” like recommendation letters and interviews, rather than objective measures of academic achievement, such as grades and exam scores. The faculty rejected the proposals then, but adopted the new holistic criteria, including a personal interview requirement to assess “character and fitness,” after the Jewish numbers continued to increase to 27.6% in 1925.

The impact was immediate and drastic. The percentage of Jews in Harvard’s freshman class plummeted from over 27% in 1925 to just 15% in 1926, and remained virtually unchanged at about that level until the 1940’s. During this time, Harvard reinforced the de facto quota by adding additional holistic admissions criteria, requiring personal essays and descriptions of extracurricular activities in an attempt to further glean “leadership” skills.

Jewish numbers at Harvard did not begin to rebound until after World War II. But while discrimination against Jews in the Ivies is no longer a problem, admissions records at Harvard and other elite colleges over the past quarter century reveal an uncannily similar treatment of Asian Americans.

In an exhaustive 2012 article, Ron Unz looked at acceptance rates at top schools since 1980 and found that the Asian numbers “exactly replicate the historical pattern … in which Jewish enrollment rose very rapidly, leading to imposition of an informal quota system.”

Asian enrollment at Harvard increased from about four percent to ten percent during the early and mid-1980’s. It then spiked after the federal Department of Education began an investigation in 1988 into an earlier discrimination complaint, peaking at 20.6% in 1993. However, beginning in 1994, several years after the investigation was closed, the numbers reversed and then stagnated, remaining at about 16% for almost two decades. 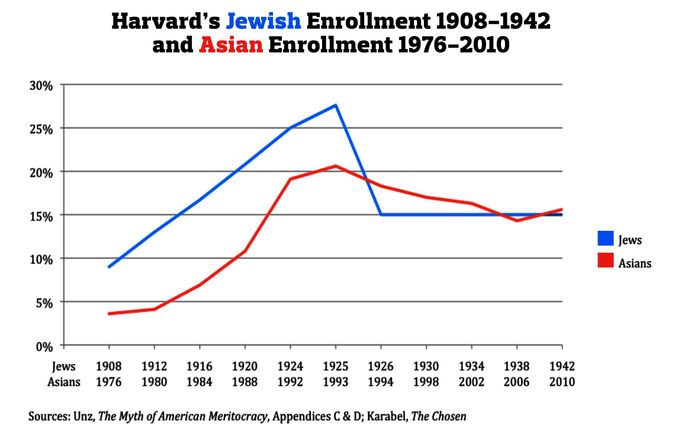 Similar patterns in Asian enrollment can be seen at other Ivy League colleges, with figures declining sharply and then holding constant in the mid to upper teens – even though Asian Americans constitute a quarter of the applicants to these schools, and 45% of the applicants with the top SAT scores.

And these figures actually understate the decline in Asian representation in the Ivies, as they do not take into account that it has occurred while Asians have been the fastest-growing racial group in the United States.

By contrast, Asian Americans do account for their expected 40% of the student body at the California Institute of Technology, the only top school which rejects the use of racial preferences and selects students based largely on academic merit. This is also true at the most selective University of California campuses, where racial preferences were barred by the passage of Proposition 209 in 1996. (Asian enrollment at Harvard and the other Ivies has increased in recent years, though it is still far below that at the California schools.)

Anecdotal evidence of prejudiced attitudes about Asians among otherwise devoutly antiracist college officials backs up the statistical inference of discrimination. Wall Street Journal reporter Daniel Golden chronicled some of these anecdotes in a 2006 book on college admissions. There he wrote of the MIT Admissions Dean who suggested that an applicant was “yet another textureless math grind … like a thousand other Korean kids,” and the Vanderbilt administrator who said that Asian Americans don’t provide a stimulating intellectual environment. A recent investigation of a discrimination complaint against Princeton found notations such as “defies the stereotypes, thinks and feels deeply” in Asian application files.

“Asians are typecast in college admissions offices as quasi-robots programmed to ace math and science tests,” Golden writes. Corroborating this, a Yale student commenting on the Princeton complaint suggested that top-tier schools “look not only for good grades but for an interesting student who will bring something of value to the community.” A Boston Globe columnist noted that the comment “sounds a lot like what admissions officers say, but there’s a whiff of something else, too.”

The something else smells a lot like the attitude towards Jews ninety years ago.

Dennis Saffran is a Queens, NY-based appellate attorney and writer. You can follow him on Twitter @dennisjsaffran. He has written about this topic for City Journal.

When It Comes To College Admissions, Asians Are The New Jews