How Trump Betrayed America Over Charlottesville 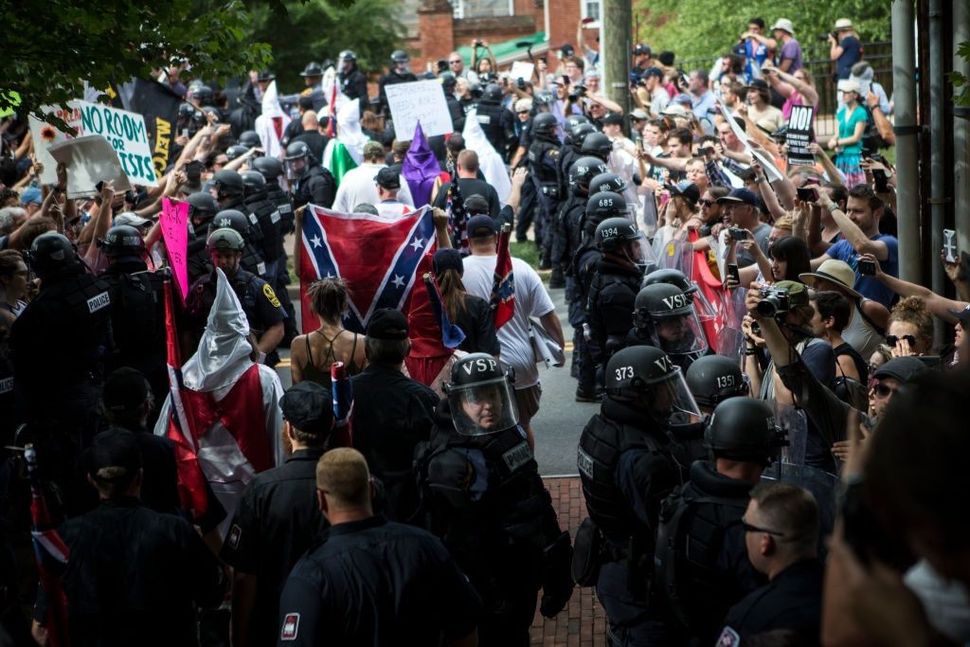 Americans of every creed, color and gender, Democrats and Republicans alike, have been listening to President Trump’s words after the outrage in Charlottesville, Virgnia — his condemnation of the “bigotry, hatred and violence on many sides, on many sides” — and responding with every possible variety of disapproval.

The president shouldn’t have left the balance of guilt so vague. He needs to condemn the racists and far-right extremists rallying in his name. He needs to clear up the ambiguities in his statements. Somebody needs to explain it to him. We need the White House to lead us.

It’s too bad folks weren’t watching him as closely as they were listening to him. Take the visuals together with the words, and there’s no longer any ambiguity in his performance. You didn’t catch his speech unless you watched it. His body gestures said what his words didn’t: I don’t side with the anti-fascist protesters, and I’m not going to pretend I do. I’m standing with my crew — not because I’m afraid of offending them, but because I don’t want to offend them. They’re my crew. They’re not what went wrong in Charlottesville, or in America.

Then he gets to the words “on many sides,” and he’s back in his comfort zone. He looks the audience in the eye. His voice and face become animated. His right hand flies out to the side in a one-handed version of his trademark gesture of emphasis. Then he repeats those words: “on many sides.” This time it’s in a lowered tone that signals sincerity tinged with intimacy.

What happened, it seems obvious, is that somebody wrote him a speech that went down like castor oil. It condemned what happened in Charlottesville in a way that made him feel he was being dragged to a liberal kumbaya festival, forced to abandon his crew. But then, nine seconds in, he found the creamy surprise inside, the three-word nugget that made the statement his and made him come alive.

The wonder isn’t that Trump spoke the way he did after Charlottesville, but that so many Americans are still surprised about it. This is the man we elected president. We knew who he was before he entered the race, and nothing he did during the race suggested he would be otherwise.

And make no mistake: We elected him. We, the People of the United States, who used to aspire to a more perfect Union. We are all citizens of the same republic. Some of us voted for him. Some of us voted against him, whether for his main rival, Hillary Clinton, or for one of the minor candidates who shared the anti-Trump vote with her. Those who voted for him got what they voted for. Those who voted against him failed to stop him, and in that manner contributed to his victory. Now he is the president of the most powerful nation on earth.

Anybody who was hoping the presidency might change him should have been disabused of that delusion by the time he finished his inauguration speech. And still, every time he commits another offense against decency or common sense, we’re bombarded again with heartfelt calls for somebody to talk sense to the man, as though he might listen.

What’s missing now is a serious discussion of why he won, of what has made the Democratic Party so unappealing to so many people that a Donald Trump could be elected president. Of what should be done now to minimize the damage he will do to America and the world community — what tactics will help, what will amount to mere venting and self-expression, what will likely backfire and strengthen the Trump party.

This isn’t the place to begin a full discussion of those questions. But a few essential points can be laid out for future discussion.

First, it’s time to recognize that the South has finally won the Civil War, 150 years late but convincingly for all that. The statement sounds hyperbolic, even fanciful, but it’s essentially true. The political ideas and forces that fought against the North and the Union in 1861, that kept alive the romantic torch of the Lost Cause through generations of nostalgia and humiliation, are now in charge of every branch of the federal government and a majority of state governments. They have evolved over a century and a half, but not beyond recognition.

Second, Lyndon Johnson was half right and half wrong when he signed the Civil Rights Act of 1964 and commented that the Democrats had just “lost the South for a generation.” They lost the South, true enough, but that was two generations ago. 1964 was the last year a Democrat won a majority of the white vote in a presidential election. Why haven’t they recovered? Why, in fact, have they gone on to lose the rest of the country?

What happened in Charlottesville was a reduction to the obscene of the grotesque evolution of the Republican Party over several decades. Thanks to Trump, a growing number of serious-minded Republicans have begun facing up to the problem. One could argue that they have a long way to go to get to the core truth, and it’s a road most may not be willing or able to follow. Still, the discussion has begun.

But Charlottesville was also a symptom of the failure of the Democratic Party. Not just the failure to win elections, but also the failure to answer the fascists’ rallies and placards with anything more than more rallies and placards. Weeping and wailing is not a political strategy. Democrats need to figure out what is required to win back the hearts and minds of the American people, and we can’t wait another generation. Miami will be underwater by then.

How Trump Betrayed America Over Charlottesville