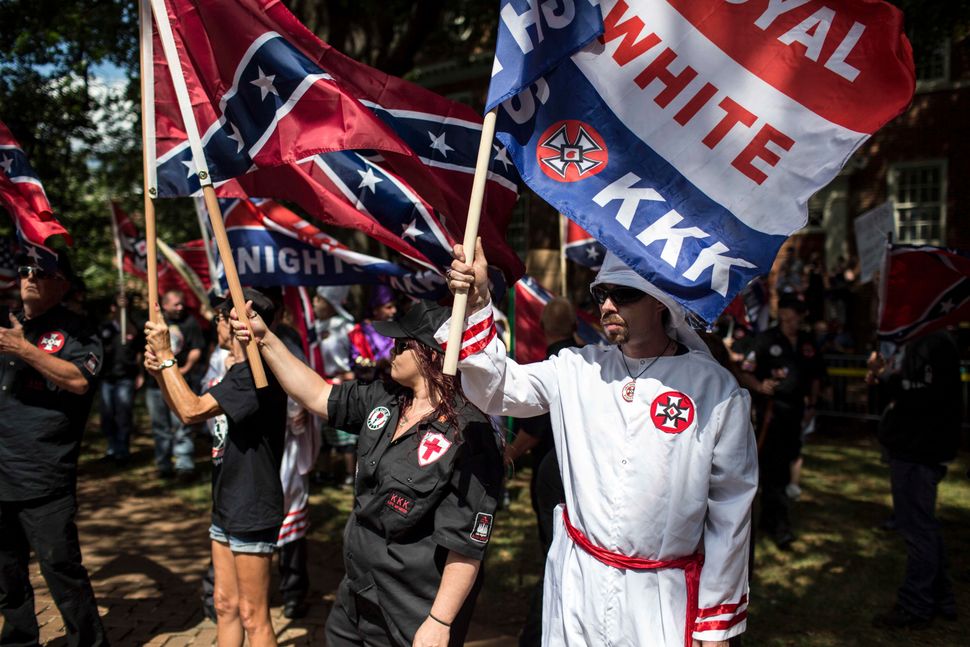 The white supremacist onslaught in Charlottesville, Virginia, last weekend was a horrifying, emblematic and possibly historic moment in our contemporary political culture. But among the many important truths it communicates, among the most important, and challenging, is its reminder that the only cultural and political freedom that is truly meaningful is the freedom to be totally, outrageously wrong.

For the overwhelming majority of Americans, the spectacle of neo-Nazis from around the country descending on a peaceful southern college town to vent their hatred constitutes the apogee of everything that is most sick and destructive in our present American climate. They’re quite right.

Yet virtually all noteworthy figures that commented, except President Donald Trump, forthrightly condemned the white supremacists and their ideology.

Racial hatred has always been part of the American scene. But for decades it has been driven to the cultural and political margins. Unfortunately, the last presidential election, particularly the Trump campaign, has given racists a new sense of empowerment. The good news is that mainstream society, with the astounding exception of Mr. Trump, is united in expressing disgust.

Of course, the Charlottesville vehicular homicide terrorist attack, violence and other unlawful abuses deserve no protection and should be vigorously prosecuted.

But even the distinct possibility of violence can’t be used to suppress the promotion of outrageous perspectives without doing fundamental, and incalculable, damage to the very principle of freedom. The only form of freedom that really tests individual liberties is the freedom to be as wrong and offensive as imaginable in the eyes of most of society.

Liberty to express popular, or widespread, opinions, is no liberty at all. Where there is a strong, socially viable constituency to support and defend expression of such perspectives, all but the most repressive societies will find room for them.

Even those most offended by the white supremacist rally should be grateful that the left-of-center American Civil Liberties Union legally defended it, and that, among others, honorable African-American police officers protected the “alt-right” bigots.

The current breadth and depth of American free speech has been hard-fought and hard-won.

As many on the right are quick to point out, campus speech codes, safe zones and bans on provocative speakers are eroding this principle at many universities. However, as Todd Gitlin importantly pointed out, there was no golden age of free speech on American campuses, particularly for liberals and the left. And as Keeanga-Yamahtta Taylor importantly adds, there still isn’t one, and campus restrictions on free speech are hardly of concern only on the right.

Efforts by both Democrats and Republicans to suppress the “BDS” campaign to boycott Israel is another important example of how vulnerable unpopular views can be to restrictions and unwarranted sanctions, including by the government.

The bromide that “the best response to objectionable speech is more speech” frequently encounters difficult gray areas. Private universities, private businesses and private associations, all have a theoretical right to choose where they draw the line in maintaining a dignified, respectful, collegial and peaceable environment.

However, unless restrictions are drawn as narrowly as possible, the specter of de facto censorship looms quickly.

Any business, for example, that discovers that one of its employees, on their time off, enthusiastically participated in the Charlottesville racism would have to choose between commonly-accepted standards of decency and collegiality and the principle that everyone is entitled to their own, private opinions, especially when not expressed at the workplace.

Civil society will probably always have to wrestle with such sometimes irreconcilable imperatives. Therefore, it’s essential that the law and the government maintain a strict neutrality on opinion, drawing any limits in the narrowest possible terms.

The United States has the broadest free-speech rights in the world. There are no prior restraints or official secrets here, unlike in most other democracies. Limitations on “fighting words” or inciting “imminent lawless action” have been drawn exceptionally narrowly. No civil tort is more difficult to win than a libel action. Freedom of association has also, typically, been robustly protected.

When hundreds of Americans are this publicly contemptible, it’s an important test of our basic commitment to their freedom to be so horribly, dangerously mistaken. It is just as important and principled to defend the right of racists to be this wrong, as it is to denounce and oppose their hateful and immoral views.

It’s not that the racists might be correct. They’re plainly not. It is about maintaining a society in which no group, including the majority, claims a monopoly on wisdom — and in which space for the widest range of expression, including shocking ideas some that might just prove unexpectedly insightful in the long run, is maintained.

This is essential to individual liberty and freedom of conscience, and to preserve space for the next great, and initially scandalous, insight, whatever it might be.

Hussein Ibish is a Senior Resident Scholar at the Arab Gulf States Institute in Washington.