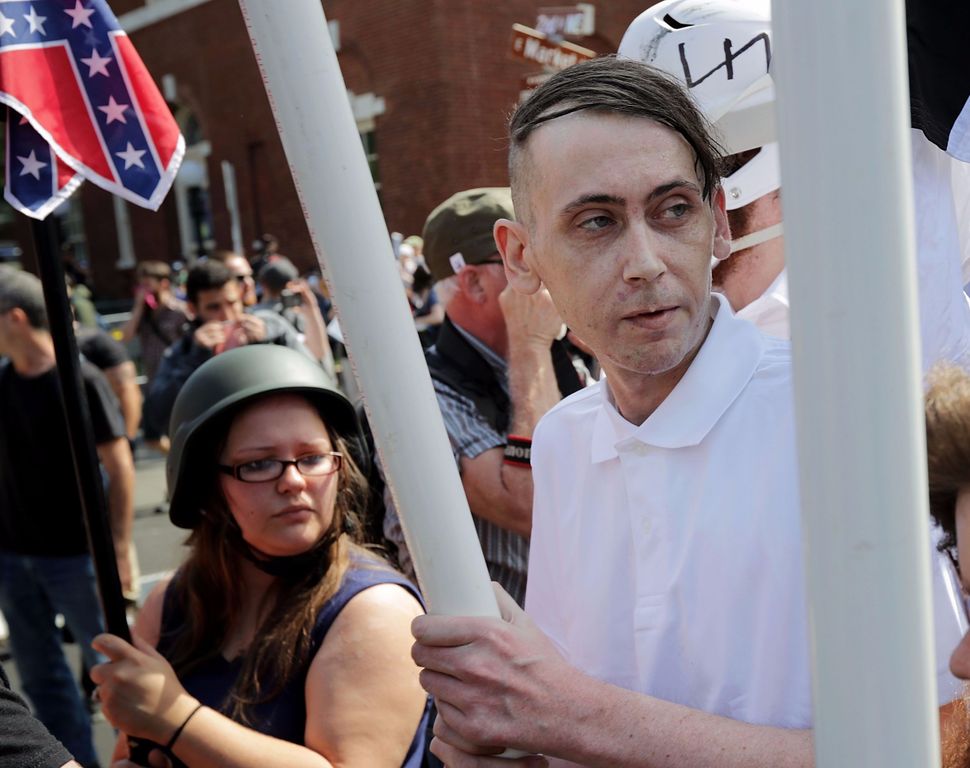 What I’m about to suggest in this column is something I’m not sure I have the moral fortitude to actually carry out in my own adult life. But before I share this perhaps painfully naive idea, I’d like to tell you a story from my childhood.

Riding the bus one afternoon, a girl in another grade began loudly complaining about our health class teacher. This teacher was the only other Jewish person in our rural Upstate New York school besides me, and pretty soon, the insults about the instructor turned anti-Semitic. I decided to toy with the girl a bit, so I played along and volleyed some anti-Semitic epithets of my own. The drama culminated in a dramatic reveal: as my stop approached, I dramatically informed her that the name Horowitz (my maiden name) is Jewish, and so was I.

Over the years, as children are particularly good at doing, I forgave the girl and we became friends. Even now, we are still friends, even though we’ve never discussed what we said that day on the bus after school. We never felt the need. She got to know me as a human being, not just a Jewish person, and whatever hatred she had been taught by someone in her family melted away, because she saw that Jewish people aren’t the evil subhumans she was led to believe.

I was reminded of this story reading the incredible tales of three individuals who have one thing in common: They have, single handedly, convinced individuals committed to a life of hatred to turn away from that hate. Through the power of listening, and treating these people with their heinous views as humans first and foremost, they were able to alter the destinies of those they encountered.

Daryl Davis is a jack-of-all trades; a musician, actor, author and a lecturer. But a documentary profiling Davis focused on not his jobs; rather, it told of Davis’s unusual hobby: meeting and befriending white supremacists.

Davis is African American, and his MO is this: He meets with white supremacists from around the country and asks them one question: “How can you hate me if you don’t even know me?”

In other words, he starts by listening. “Give that person a platform; let them air their views, and they will reciprocate,” he explains.

It’s a novel idea in this age of the Donald Trump administration to listen to anyone we disagree with – especially so with white supremacists. But with his technique, Davis has achieved the impossible. He has convinced two hundred members of the KKK and other white supremacist groups to renounce their views.

Another incredible mind-changer is David Abitbol of the blog “Jewlicious.” The target of his patient attentions was Megan Phelps-Roper, a member of the Westboro Baptist Church. Unlike any other Church in America, the members of Westboro spend their time traveling to funerals and other major gatherings, picketing with inflammatory signs about how God hates pretty much everyone. The list of God’s unchosen includes Jews, gays, veterans, Muslims, baby killers, etc, etc.

In order to further her mission as a member of the Church, Phelps-Roper joined Twitter, where she easily found many of her sworn enemies. As she explained in an interview, “One of the first things I did on Twitter was attack this Jewish man, David Abitbol, who ran a blog called Jewlicious.”

Initially, Abitbol responded to Phelps-Roper with sarcasm and hostility, but he soon changed tactics. “Instead of mocking me — although he still did some of that too — he was asking questions about our picket signs and I started asking him questions about Jewish theology because I wanted to know how to better counter it,” she explained.

The power of discourse, questioning, and true curiosity on both sides got the better of her. Their year-long exchanges led to Phelps-Roper leaving Westboro, and not just Phelps-Roper; she took most of her family with her.

All this was the result of Abitbol taking the time to engage Phelps-Roper as a human being.

The subject of our third remarkable story is Derek Black, the scion of famous white supremacists. His father, Don Black, was the brains behind Stormfront, the Internet’s first and biggest white nationalist site with 300,000 users. His mother, Chloe, had been married to David Duke, who was Derek’s godfather. “They had raised Derek at the forefront of the movement, and some white nationalists had begun calling him ‘the heir’,” the Washington Post reports ,

Black was outed on his college campus as an anti-Semite. But one of his classmates, Matthew Stevenson, the only Orthodox Jew on campus, decided to invite Black to a Shabbat meal.

“It was the only social invitation Derek had received since returning to campus, so he agreed to go,” writes the Washington Post. Stevenson told the other guests, “Let’s try to treat him like anyone else.”

Pretty soon, Black became a regular at these Shabbat meals. And eventually, Black, like Phelps-Roper and the two hundred men (and women) Davis befriended, renounced the ideas that had once filled him with such hatred.

I am not made of the same fiber of Davis, Abitbol or Stevenson. I spent the entire Republican primary being attacked by white nationalists and landed myself on a top ten list compiled by the ADL of Jewish journalists targeted by them. Unlike these three remarkable human beings, I did not engage with any of these individuals as human beings once. But maybe I should have, and maybe I should in the future. Because hating people for being hateful obviously isn’t getting us anywhere.

Someone once tweeted, “There is not a single good person who voted for Trump. Not one.” To which Federalist writer Tom Nichols responded, “This is a recipe for a second Trump term.”

This is a recipe for a second Trump term. https://t.co/Ocy7rTdMJi

Phelps-Roper agreed, and retweeted it.