The One Thing Jews Should Be Doing To Combat White Supremacy 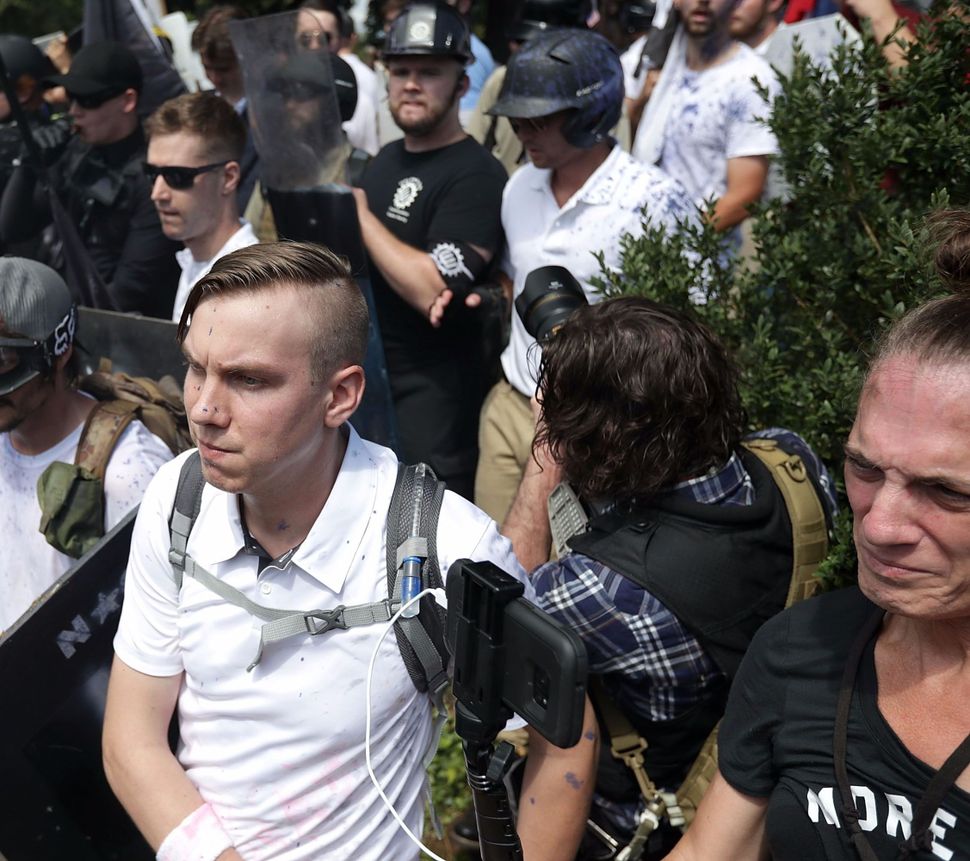 What did you feel when you heard the neo-Nazis in Charlottesville, Virginia, chant, “Jews will not replace us?” Fear, of course. Bewilderment, perhaps anger. But I bet a lot of Jews felt another emotion, which they’re less likely to articulate in public: snobbery. “Replace you? Where, behind the counter at Wendy’s? We’re successful, industrious, upper-middle class. You’re the dregs of society. Replace you? Don’t kid yourselves. When it comes to America’s class hierarchy, we replaced you and your kind long ago.”

Today’s anti-Semitism isn’t like the anti-Semitism of 100 or even 50 years ago. Overwhelmingly, it comes not from society’s winners but from its losers. Jews no longer press their noses against the gates of restrictive country clubs, Ivy League universities or white shoe law firms. Jews no longer yearn to be accepted by America’s elite WASP families. We already are. The man who currently occupies the White House watched with satisfaction as his eldest daughter became an Orthodox Jew. The woman he defeated watched happily as her daughter got married under a chuppah.

Today’s anti-Semitism emanates less from society’s elites than from the people who feel victimized by them. This doesn’t mean the new anti-Semitism isn’t dangerous. It doesn’t mean Jews shouldn’t respond with outrage and mobilization. But it does mean that, if only to protect ourselves, we must combat the economic and cultural dysfunction that is contributing to neo-Nazism’s rise.

Sunday’s Washington Post profiled six young men who marched for white supremacy in Charlottesville. It described victims of “an economy capsized, a job market contracted, a student-loan crisis erupted,” who found a scapegoat for their woes, and a sense of belonging, in organizations that preach hate. Matthew Parrott, who was diagnosed with Asperger’s syndrome at age 15, grew up in a mobile home. At Indiana University, students from wealthier backgrounds “made fun of my accent and overbite and they called me ‘white trash’ and ‘hillbilly.’ I was never able to identify with a single person.” Until he found white supremacists. Peyton Oubre, from Metairie, Louisiana, couldn’t find a job after high school: “I could put in 500 applications and receive one call,” he said. He blames blacks for taking all the jobs. Tony Hovater, of Dayton, Ohio, grew radicalized while touring with his metal band through decaying, mostly white Rust Belt and Appalachian towns. “You see how a complete system failed a group of people,” he told the Post. Yet the media, he says, discusses only the African-American poor.

Of course, not every white supremacist grew up in a mobile home. Richard Spencer, the son of an ophthalmologist, attended a tony prep school in Dallas. Studies show that in purely economic terms, white supremacists don’t differ much from the population as a whole. But they do differ from Jews, who are America’s wealthiest religious group.

They don’t just differ financially, they differ culturally, too. They are far less likely to have been raised in stable homes. In a 2014 interview with the Southern Poverty Law Center, sociologist Pete Simi, who has extensively interviewed white supremacists, noted that “one of the most common background characteristics is some kind of family disruption, whether that be divorce or parental abandonment, a parent becoming incarcerated, or substance abuse by one or both of the parents.”

What would it mean for American Jews to combat not merely Neo-Nazism, but also the conditions that contribute to it? For American Jewish organizations, it would require opposing economic policies like the Republican assault on Obamacare and the upper-income tax cuts the GOP is pushing this fall, policies that widen the chasm between America’s rich and poor. It would require pushing for more funding for the treatment of opioid addiction, the kind of issue that American Jewish groups don’t typically consider part of their agenda.

For synagogues, countering the conditions that produce neo-Nazism might involve assisting a church in a troubled area. Why? Because according to University of Virginia sociologist W. Bradford Wilcox, white working-class Americans who attend church are less likely to experience divorce, addiction and financial distress. Church attendance also eases the “alienation and purposelessness” that, according to the Post, characterizes many of the young men who drift toward neo-Nazism.

To some Jews, these proposals might sound bizarre, even offensive. We’re supposed to help people who want us dead? What about all those non-Nazis who face economic and cultural problems? Don’t they have a better claim on our concern?

Sure, but it’s not zero sum. Combatting the hopelessness and misery that afflict many rural and de-industrialized American communities wouldn’t only benefit young white men at risk of turning to organized racism;it would also benefit their neighbors, some of whom are Latino and black.

The point is that because Jews occupy a different place in contemporary American society than did Jews in other societies facing rising anti-Semitism, we can respond in different ways. Of course, as Jews have for centuries, we must band together for self-protection. But as a successful, well-established, political influential community, we can also confront the dysfunction and despair that leads some of our fellow Americans to scapegoat us.

In ways that would have been unimaginable to the Jews of medieval France, or 20th-century Eastern Europe, we answer hate by repairing the country in which we live. This is not a moment to turn inward. It’s a moment to reach out to the places we usually ignore or dismiss. By instilling hope in others, we can provide safety for ourselves.

Peter Beinart is a Forward senior columnist and contributing editor. Listen to his “Fault Lines” podcast with Daniel Gordis here or on iTunes.

The One Thing Jews Should Be Doing To Combat White Supremacy