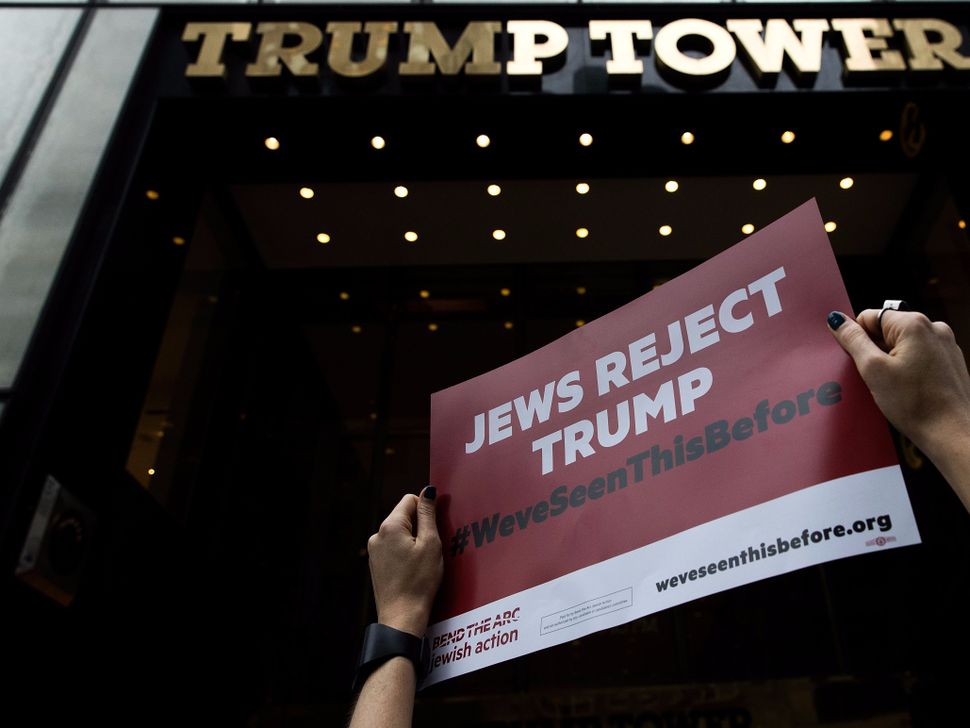 The anti-Trump left has become the great defender of Jews the world over. This is at least what Jewish progressives want you to believe. But if you look closely, the kind of thought policing coming from those corners clashes with the moral authority they claim to possess. In the preachy, Jew-shaming that has become all the rage these days, the Jewish left has shown itself to be the opposite of what it claims to be. You can’t call yourself pro-Jew while also dictating what it means to be Jewish.

Take for example two icons of the literary left, Michael Chabon and Ayelet Waldman. The couple recently penned an open letter calling upon their fellow Jews to denounce President Trump in the wake of the president’s Charlottesville remarks. Then there was democratic Senator Brian Schatz of Hawaii who recently urged Jewish members of President Trump’s cabinet to resign in protest. And just this week, a conclave of Conservative, Reconstructionist, and Reform rabbis canceled a pre-High Holiday phone call with the president—a tradition solidified under President Obama.

While these actions purport to protect Jews from the evils of white supremacists, time and again these denouncements call into question the very Jewishness of their targets. They convey to those who dissent even a little that they are not real Jews. And they truck in the very us-vs.-them mentality they claim to oppose in Trump and his ilk. “First he went after immigrants, the poor, Muslims, trans people and people of color, and you did nothing,” write Chabon and Waldman. “If you don’t feel, or can’t show, any concern, pain or understanding for the persecution and demonization of others, at least show a little self-interest. At least show a little sechel. At the very least, show a little self-respect.”

This kind of moralizing does nothing to convince anybody – and Chabon and Waldman know this. The piece, like much of the left’s post-Charlottesville moralizing, is an exercise in exclusion. As such, it is incompatible with being pro-Jewish, even though it’s packaged in a protest against anti-Semitism.

But this shouldn’t surprise us. The left’s newfound concern for the Jewish people indeed comes as quite a shock to those who have followed its tenuous relationship with Jews and with Israel over the past couple of decades.

When they are not playing the fictional and self-anointed role of Great Defenders of World Jewry, Chabon and Waldman are strident critics of Israel. Most recently, they brought together many of their literary friends to opine on Israel’s “occupation” — because, you know, being an award-winning novelist must make you an expert on the Middle East.

It’s not just novelists. The left’s spiritual leader, Senator Bernie Sanders, feels no love lost for the State of Israel. For all of Sanders’ time on an Israeli kibbutz, he opposes foreign aid to Israel and refused to back a resolution condemning Palestinian terrorism after two suicide attacks. He is also an unapologetic supporter of the Iran nuclear deal, which many, including Israel’s Prime Minister Benjamin Netanyahu, view as a threat to Israel’s security.

This same progressive camp is home to the Boycott, Divestment and Sanctions or BDS movement, which seeks to delegitimize Israel by encouraging countries and companies to boycott the Jewish state. The BDS movement counts among its proud supporters Jewish Voice for Peace, the same organization that recently compared Zionists to white supremacist Richard Spencer.

It’s impossible to miss the irony of a movement that supports boycotting its own suddenly proclaiming itself their strongest defenders.

Of course, not all criticism of the president or of the right is invalid simply because it comes from the left. Many reasonable people from across the political spectrum have denounced President Trump’s troubling comments without casting aspersions on people’s religious choices.

What you have from the Jewish left is something else entirely, and it isn’t motivated by great love for the Jewish people. Instead, it’s a commitment to a higher calling: worshipping at the altar of progressive politics. And those who do not bend to their singular vision of the world are deemed wanting, as Jews and as human beings.

While the majority of the U.S. Jewish population has voted Democratic for decades (the last Republican to get a plurailty of the Jewish vote was Warren Harding in 1920), liberal Jews of past years have seemed content to quietly discount their Republican brethren as the black sheep of the tribe. Now, we are facing the full brunt of their indignant wrath.

But when you put aside the ad hominem attacks, there are legitimate questions that should be debated about what it means to be good to and for the Jews: Was President Obama good for the Jews with his nuke-filled goody bags for Iran, and his backyard bullying of Israel? Would Hillary Clinton have been better for Jews who care about the security of Israel, religious freedom, and school choice? Does President Trump’s reckless language make him the modern incarnation of Hitler – or is there a danger in being too quick to label everything and everyone anti-Semitic? Does President Trump’s reckless comments and affiliation (real or perceived) with white supremacists trump all other policy concerns?

For the Chabons and Bernies of the world, the answers to these questions are as simple as they are inflexible. But in truth, they are far more complex and certainly should not be decided by a self-appointed groups of Jews with a history of lambasting Israel.

Instead, we should focus on basic principles that reasonable people can agree upon:

It is not pro-Jew to wield political ideology as a religious weapon.

It is not pro-Jew to demand allegiance to a singular belief system.

It is not pro-Jew to fan the flames of ant-Semitism and anti-Zionism (often two sides of the same shekel) with disproportionate attacks on Israel.

It is not pro-Jew to dictate what it means to be Jewish.

And there’s the rub. Of all the dangerous ideas, perhaps most damaging is the notion that Jews must succumb to a political ideology, lest they fail to be authentically Jewish. Surely a history chock full of being murdered en masse for failing ideological tests is enough to remind us of that.

Jews — like all Americans — are free to fashion their own political beliefs, support whom they choose, and vote for whomever they want. They should not be bullied into supporting one set of beliefs that is by no means better for world Jewry. Chabon and his cohorts have fashioned themselves into a kind of ideological Jewish police force — and that is the most offensive and scary thing of all.