How Obama Was Our Most Jewish President — And Trump Our Least 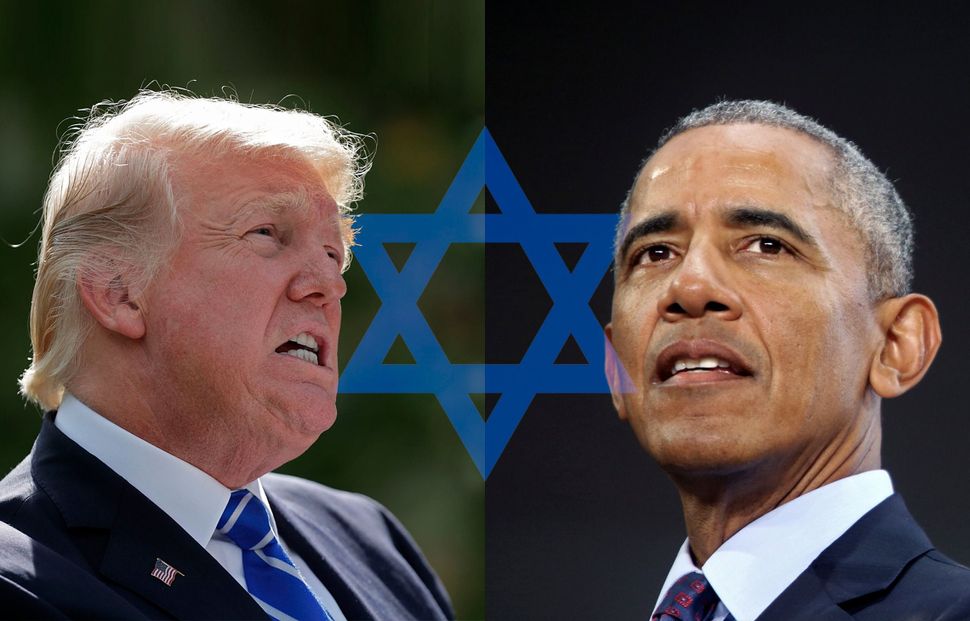 As a young White House speechwriter – and a veteran of eight years of Hebrew school – I once tried to help Barack Obama pronounce the hard “CH” sound in “chag sameach.” At the risk of understatement, it didn’t go well. I tried to use “happy holidays” after that.

But there was another, far more consequential rule I tried to follow when I worked on President Obama’s speeches to the American Jewish Community. Whenever possible, POTUS spoke about the way the Exodus inspired other oppressed peoples seeking freedom from persecution – and he often recalled Jewish leaders such as Abraham Joshua Heschel standing side by side with heroes of the Civil Rights movement more than fifty years ago.

I never asked him this directly, but I came to believe that President Obama saw the American Jewish story in the context of a far larger story – the universal struggle for human rights and dignity. The immigrant experience of many Jewish families (mine included) is shared by Americans of every background. Our journey is a reminder of this country’s promise that anyone who works hard can get ahead, and proof that, with a frequency rarely matched in human history, the United States lives up to its ideals.

Sometimes, however, we fall short. And here too I believe that President Obama, while a practicing Christian, understood and in many ways identified with Jewish thought. In speeches to the Jewish Commuity he spoke frequently about Tikkun Olam – repairing the world. Our detractors often dismissed this as a kind of touchy-feely Judaism, kumbaya volunteerism masquerading as faith.

But as a speechwriter, and a young person working in the Obama administration, that’s not how I saw it. Implicit in the idea of repairing the world is the understanding that the world is in some way broken. This fundamental imperfection – the gap between who we are and who we aspire to be – was at the heart of POTUS’s understanding of our country, our world, and ourselves. In his autobiography, “Dreams from My Father”, he described growing up torn between identities before finding purpose and fulfillment in service. While he often spoke of the genius of our country’s founders, he also referred to slavery as America’s “original sin.”

Which brings us to Yom Kippur. While President Obama didn’t celebrate the day of atonement personally, the themes of the Yamim Noraim – redemption through both faith and good deeds; admission of both individual and collective inequity; humility before an awesome G-d – were often found in his remarks. The way we Jews describe the inevitable falling short of perfection, and our ever-present hope of return, were quite similar to the way POTUS described the story of America as a whole.

It’s a narrative that manages to be both accurate and hopeful – and no less important, it’s good for the Jews. The vision of America that President Obama described has room for everybody. What makes us worthy – what makes us great – is not the condition we are born into, but rather how we choose to live. While America is exceptional, “American” is not an ethnicity. American-ness is defined by the set of responsibilities we shoulder, and the values we share. It’s a vision that welcomes all faiths and has no place for anti-Semitism. To hate anyone because of their religion (or their skin color, or the language they speak) is simply un-American.

Compare this to our current president. Humility before our creator is not, to put it mildly, Donald Trump’s forte. Nor is the notion that all of us have, whether willingly or unwillingly, sinned. During the campaign, when asked if he had ever asked G-d for forgiveness, he replied, “I am not sure I have.” When asked to clarify, his was reply was as follows:

“Why do I have to repent or ask for forgiveness, if I am not making mistakes?”

It’s unlikely that Donald Trump has truly grappled with the concepts of sin and atonement. But his flippant answer represents a very different view of what makes us – as individuals and a country – great. In Trump’s telling, there is no need for return. Some people are good and stay that way. Others are bad, and ditto. The idea that none of us is perfect, but that all of us can become more perfect, is completely foreign to our current Commander-in-Chief. Instead, his thinking seems to be, “If I do it, it’s not a sin.”

President Trump extends that same thinking to his allies, and, in the short term at least, this can make Trumpism a surprisingly attractive worldview. Take his view of the Middle East. In Trump’s view, there is never any reason to criticize Israel (or at least its current government) when it falls short of professed ideals. As an ally in a perceived struggle between the good guys of the West and the bad guys of the East, Israel, like Trump, is immune to sin.

But there’s a danger in embracing a leader who divides the world into good guys and bad guys. Not everyone will place us in the good-guy group. There’s not much evidence to support the idea that President Trump is a hardcore anti-Semite in the mode of, say, Richard Spencer. But in the black-and-white, West-versus-East ideology that people like Richard Spencer espouse, Trump surely recognizes echoes of himself.

There are still some American Jews (including a few members of the president’s staff, family, and cabinet) who seem to think that Trumpism and anti-Semitism do not have to go hand in hand. Jews can be defined as part of “real America,” while Muslims, immigrants, and Black Lives Matter protestors can be defined as the other. But even if this notion were moral, which it’s not, it would be foolish. Once “the other” is a category of people being demonized, it does not take long for at least some extreme elements to place the Jews inside it.

“Jews will not replace us,” chanted neo-Nazi protestors in Charlottesville. Is anyone really surprised that, at a rally organized around white supremacy, anti-Semitism showed up? And is anyone really surprised that, reluctant to criticize those he perceives as allies, President Trump resorted to declaring that there are very fine people on both sides.

Looking at the state of our country in 2017, we must recognize that, individually and collectively, we have fallen short. Some of us have ignored blatant racism and hatred, telling ourselves that other priorities matter more. Others, myself included, were slow to fully understand the scope of the danger “ethnic nationalism” presents. In part, perhaps, this is because we assumed Jews would not be personally affected.

But this is a time for reflection and return. Already, American Jews are responding to the new threats we face – both as a community and as a country. And going forward, we must recognize that the story we tell ourselves must once again define goodness and greatness by our conduct rather than our inborn traits. Such a story leaves us open to criticism, and criticism can sting. But as we beat our breasts on the day of atonement, we must recognize that while it hurts to admit our imperfections hurts, it is the only way we can become more perfect over time.

David Litt is a former Obama speechwriter and author of “Thanks, Obama: My Hopey Changey White House Years”.

How Obama Was Our Most Jewish President — And Trump Our Least