Smearing Linda Sarsour Is The Opposite Of Fighting For Racial Justice 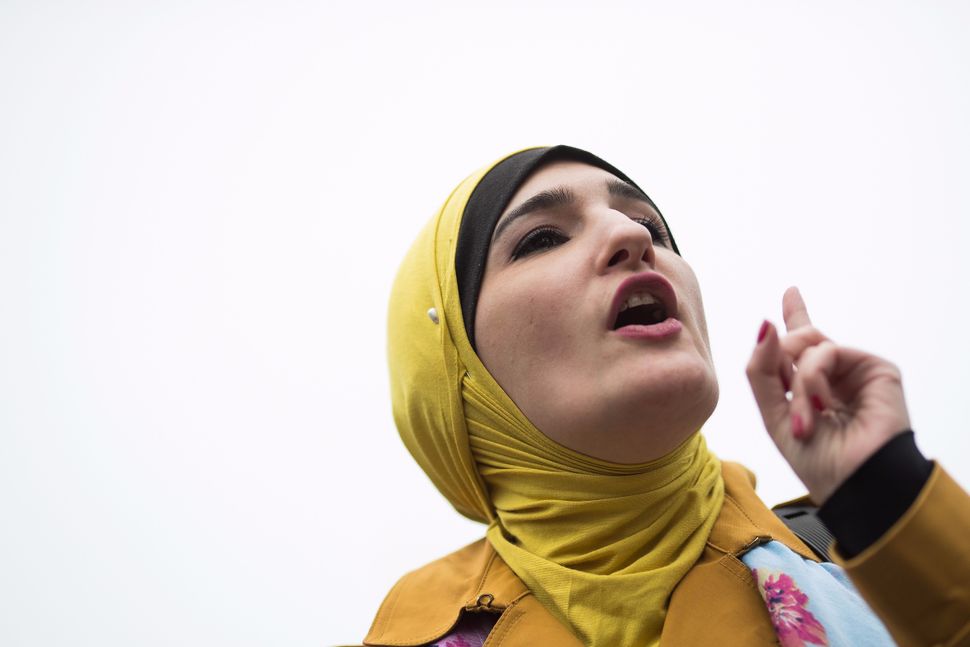 Linda Sarsour is many things. As she often introduces herself, she’s unapologetically Muslim-American, Palestinian-American and from Brooklyn, New York. And she’s also a critical leader in the fight against all forms of oppression, including anti-Semitism.

Jewish Voice for Peace (JVP), of which I am the Deputy Director, recently released an anthology called On Antisemitism. In it, Sarsour writes the following:

Linda Sarsour is articulating a vision of a world where truly every single one of us —Jews and Palestinians, Muslims, and Christians — can be safe and free. In the service of these beliefs, Sarsour has shown up for the Jewish community, from the high profile effort to raise money for desecrated cemeteries to the more quiet and less visible work of showing up to countless meetings, phone calls, marches, rallies, and workshops to work alongside Jewish partners in campaigns for social justice.

Despite Linda’s years of organizing for racial justice, including longstanding relationships with Jewish organizations like Jews for Racial and Economic Justice (JFREJ) and JVP, her increased visibility this year has brought with it unprecedented hate and vitriol. From the far right to the liberal corners of the pro-Israel community, the attacks on Sarsour betray an obsessive focus that can only be explained by an inability or unwillingness to recognize a Palestinian, Muslim woman as a genuine leader whose calls for justice, equality and dignity encompass all of us.

Most recently, Emily Shire wrote about Sarsour in these pages in a piece titled “Practice What You Preach, Linda Sarsour.” Shire excoriated Sarsour for saying that she would “not be intimidated by right-wing Zionists” at Sunday’s March for Racial Justice. Shire also took issue with the fact that Sarsour felt unsafe at the March, possibly due to the presence of a contingent from Zioness, a group that Shire wrote “stands in solidarity with those who seek social justice while promoting self-determination for the Jewish people,” quoting from their Twitter profile.

It’s false advertising. Zioness was founded by Amanda Berman and Brooke Goldstein, both of The Lawfare Project, a right-wing Zionist group that uses legal action to oppose activists on college campuses and beyond.

Berman may have written on the Zioness Facebook wall yesterday that “all human beings deserve dignity, equality and the protection of their inalienable human rights.” But The Lawfare Project’s record is anything but progressive. Goldstein has been skeptical not only about Islamophobia, but about the Palestinians, too.

In an interview with Megyn Kelly in May 2017, Goldstein claimed, “Islamophobia … is a contrived term that was invented by the Muslim Brotherhood with the sole purpose of stigmatizing those who are engaged in dialogue about militant Islam.” And at an anti-BDS conference in 2016, Goldstein asked an audience, “Why are we using the word Palestinian? There’s no such thing as a Palestinian person.”

Maybe this is why the presence of the Zioness flags made Sarsour feel unsafe. The ongoing denial of Palestinian rights and humanity is a racial justice issue. It’s not just Palestinians living under occupation or as second-class citizens in Israel who face racism, discrimination and state violence; Palestinian-Americans here in the United States like Sarsour also face racism on a daily basis. When Sarsour talks about racial justice, she speaks from personal experience. And sadly, just as in Israel, some of that racism comes from our own Jewish communities.

Racial justice work isn’t easy, and none of us nor our institutions are perfect. It requires deep listening, weighing multiple accountabilities, and being willing to face uncomfortable truths. For many Jews, it also requires us to listen to Palestinians about what Zionism has meant, and what it means today for their land and their families. For us at JVP, it also means striving to center Jews of Color and Sephardi and Mizrahi Jews. It means making the connections between systems that perpetuate racism in the U.S. and in Israel/Palestine.

Fighting anti-Semitism as a branch of the tree of racism, to again quote Sarsour, isn’t easy work either, especially when it has grown in such virulent ways so quickly over the last year, and while false charges of it still persist to slander Muslim and especially Palestinian calls for justice.

If we are to achieve our goals, the tree of racism must be uprooted, root and branch. And Linda Sarsour is the leader we need as we roll up our sleeves and get digging.

Smearing Linda Sarsour Is The Opposite Of Fighting For Racial Justice