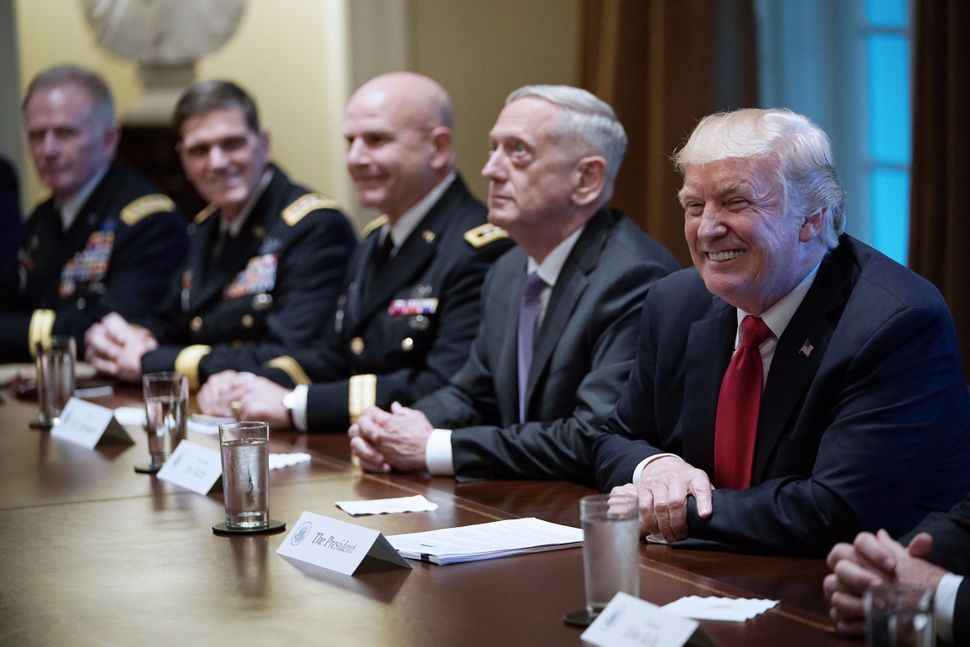 The meaning of the Yiddish word “mensch” can scarce be conveyed in English. Literally a man, mensch means so much more than that. But it means so much more than that. A mensch is a good man, someone who can be relied upon to do the right thing. A mensch has integrity. He (or she!) has honor. Be a mensch, your mother might have told you. Or as Calvin Trillin’s father told him, “You might as well be a mensch.”

It’s a shame the White House has become an adult day care center. Someone obviously missed their shift this morning.

But there may well be adults in attendance, at least if you define adulthood as James Mann did in the New York Review of Books this month. In an article entitled “The Adults in the Room,” Mann argues that adulthood used to be a matter of policies and process in our nation’s capital. Adults pursued moderate and middle of the road goals, and practiced pragmatic and reasonable methods to achieve them, per Mann. But all that changed since November 2016.

Trump’s rise to power has transmogrified the meaning of adulthood, says Mann. It is no longer the stuff of policy, but instead of personality (or, indeed, of psychosis). The adults in the room are now expected, in Mann’s words, “to preserve a modicum of stability within the administration.” How do they do this? By “cleaning up” the presidential messes, he writes, as well as by sending “signals that they are trying to keep Trump from veering off course.” And should all of these efforts fail? Well, according to Mann, the adults in the room will act on their adultness by leaving the room. “They simply distance themselves from his tirades.”

But what the Trump Administration is really missing is not adults so much as mensches. For cleaning up Trump’s messes and explaining away his tirades may be the acts of an adult, but they are not the actions of a mensch.

“The key to being a real mensch is character, rectitude, dignity, a sense of what is right, responsible, decorous,” writes Leo Rosten in The Joys of Yiddish.

In his classic definition of the word, Rosten was channeling the spirit of republican Rome. Menschlichkleit is little more than the Yiddish rendition of the mos maiorum, the passel of principles to which any self-respecting ancient Roman aspired. A few of these principles, like dignitas and disciplina, hardly need translation (into either English or Yiddish); others, like constantia (the sense of responsibility and steadfastness) and gravitas (self-control and the ability to weigh the seriousness of events) require a quick gloss. Fides connotes trustworthiness, while the most elusive traits, pietas and virtus, respectively mean taking the full measure of one’s small place in the greater scheme of things and the capacity to distinguish between right and wrong.

Despite the coterie of Jews surrounding Trump, there is no one with enough integrity or honor to stand up and do the right thing.

In his refusal to pander at White House cabinet meetings and his resistance to deny the right of transgender individuals to serve their country, , his grasp of the gravity of saber rattling and loyalty to the ideals that founded this nation and not to the employer who scorns them, it turns out that Mattis, and not the Mnuchins, Cohns or Kushners, is the sole mensch in the room.

Menschlichkeit is an equal opportunity ethos: one need not be Jewish to apply (or have it applied to oneself). For this reason, we should not worry that the Jewish members of the current administration cannot clamber over the mensch bar. Instead, we should worry that while Donald Trump has surrounded himself with adults, he has barred mensches from serving in his administration.

If only someone would whisper in their ears: “You might as well be a mensch.”