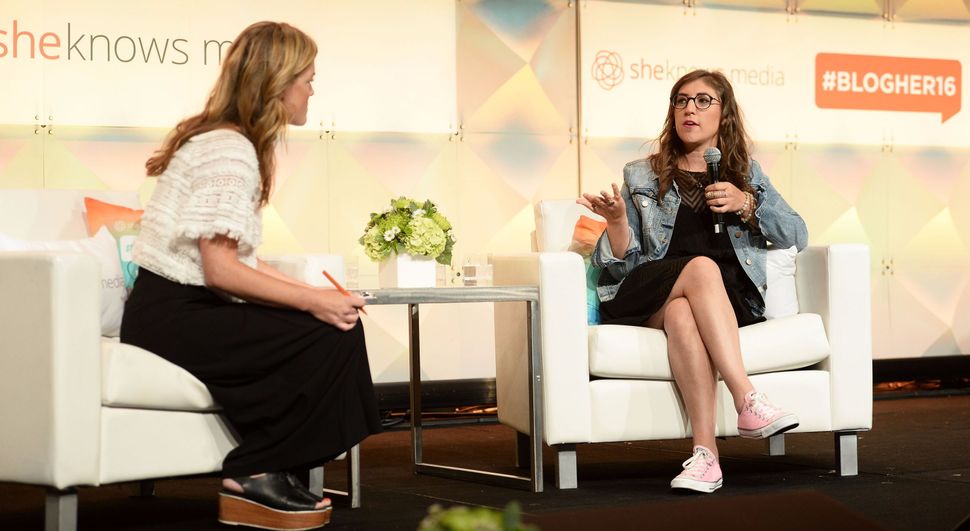 Like so many of us, I have now read many of the accounts of Harvey Weinstein’s alleged victims, as well as the courageous descriptions of assault and harassment by other working women.

Predictably, there have been some accusatory or simply obtuse articles suggesting that the women who have come forward have been themselves guilty of foolish and irresponsible behaviors.

First there was Mayim Bialik, whose op-ed in The New York Times credited her modesty and abstinence from flirting with keeping her safe from harassment. Then, in these pages, Avital Chizhik-Goldschmidt suggested that the Orthodox concept of yichud — in which women and men are forbidden from being alone together — could work as a remedy for women’s vulnerability to predators. “As a young female reporter often traveling alone, I’ve genuinely found my religious guidelines helpful in protecting myself,” Chizhik-Goldschmidt writes. “Those narrow escapes stopped harassment from turning into anything more.”

Bialik had her nose; Chizhik-Goldschmidt has her yichud.

And a woman’s ability to protect herself from a bad man isn’t — but more importantly, shouldn’t be — the reason women aren’t harassed or worse.

But there are more fundamental problems with using the religious concept of yichud in this context. Yichud was created by men on the assumption that women are a temptation to sin — not that they are vulnerable to attack. In other words, it’s entrenched in religious authority, making it an unrealistic candidate for progress toward empowering women.

As Chizhik-Goldschmidt explains, for the rabbis who invented yichud, men, naturally prone to sexual aggression, must be protected from opportunities where they might indulge this part of their nature, potentially endangering their moral status as observant Jews. This assumption is not one that can be rewritten by women, whose religious authority would not be accepted by any but a very small segment of Orthodoxy.

Creatively imagining a different framework for the idea of yichud may be commendable and thought-provoking, but every attempt to do so can be refuted by centuries of halachic interpretation. Yichud has been structured to protect men from themselves, not women from men.

We’re talking about the Orthodox community, where women are currently locked in a struggle for more representation. The status of Orthodox women as clergy or as halachic decisors has recently been threatened by the Orthodox Union. There’s just no way that changing yichud into a protected personal space where women’s autonomy is respected would be accepted by the men in charge; in fact, it could easily be co-opted by rabbinic leaders, who have always argued that the religious laws thst appear to limit women’s freedom and participation in daily life are actually ennobling and enriching to them. This argument has been made for every practice, from the prohibition against women reading Torah in public to the refusal to allow them to serve as witnesses in religious courts.

Likening the idea of yichud to simple common-sense measures such as training in Krav Maga on the surface seems sensible; yet the enforced separation of women and men as defined by Jewish law cannot be challenged simply by describing it in a more palatable way. It is not related to a woman’s “safe space” or a women’s membership organization where we are encouraged to express our views without male interruption. Yichud is categorically different from attempts by women ourselves to maintain acceptable and respectful boundaries in our relationships with men. As for Krav Maga, looking at Harvey Weinstein it would seem that only a black belt in martial arts would have even a chance at self-defense.

I respect Chizhik-Goldschmidt’s reflections on the complexity of this issue, including her warning that a reappraisal of yichud must not be seen as a limitation on women’s professional lives. I am less optimistic that any exploration of ways to expand women’s freedom, including freedom from assault, will be accomplished within the confined spaces of oppressive laws.

Only full equality between men and women in Judaism will begin to change a culture where control of the ugliest and most negative male behaviors can be controlled only by denying women full autonomy. This will require full recognition of that autonomy, allowing men and women to work together to ensure safety and dignity for everyone.

Emily Schneider is a writer and Jewish educator in New York City. Her articles about children’s literature, Jewish culture and history have appeared in the Forward, Tablet, Jewcy and Family Reading, The Horn Book’s blog.