Has Trump destroyed satire? Lessons from a Russian dissident. 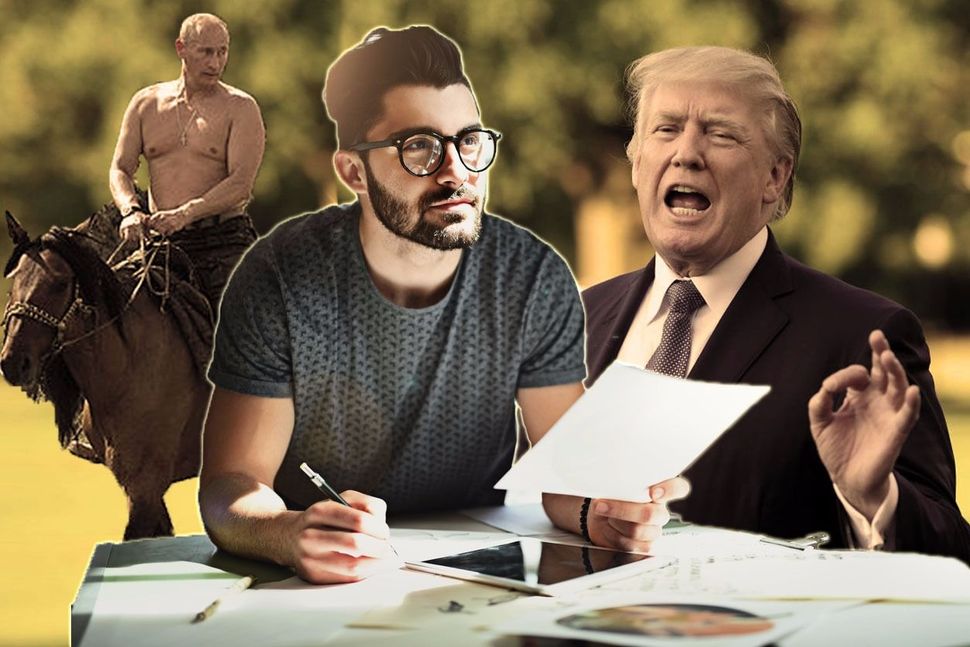 With the presidency of Donald Trump, America has entered an era of Russian-level political absurdism.

We now have our own pop-authoritarian president who promises to personally fix everyone’s problems, blames all of the nation’s ills on the plotting of evil foreigners, vilifies the opposition as “enemies of the people,” and speaks the language of crude faux-masculine swagger. Thankfully, Trump’s authoritarian instincts, unlike Vladimir Putin’s, have so far been largely constrained by the American political system. But if there’s one thing both leaders have imperiled equally, it’s the beloved genre of political satire. For satirizing someone who already walks and talks like a kitschified supervillain is no easy task.

How do you write satire about a leader who poses topless, shows off his martial arts moves for the cameras, and flies an airplane at the head of a flock of cranes to impress upon his people his manly physique and prowess? How do you satirize a leader who picks fights with war widows on Twitter and brags about the size of his, er, crowds?

Once believed to be a godsend to satirists, Trump and Putin, in fact, threaten to make satirists obsolete.

As it happens, on Inauguration Day last January — the day we woke up to the Trump-era new normal — I was interviewing one of the few people coping brilliantly with the challenge of writing satire in the age of Putin: Russian writer and Soviet-era dissident Vladimir Voinovich, then on a visit to the New York area. Discussing his new novel “The Crimson Pelican,” a send-up of life in Putinland, Voinovich told me, “Our reality is so absurd that the only way to describe it is an absurdist literary genre.”

Voinovich, who recently turned 85, took a long lifetime to hone the skills necessary to parody the absurdities of Putin’s Russia. He was born in Soviet Tajikistan; his father was a Russian journalist of Serbian descent, his mother a Ukrainian Jew who worked as a newspaper editor and then a math teacher. Voinovich had a hardship-filled childhood that included his father’s arrest and the ravages of World War II. Later, after graduating from a Moscow college, he became a rising literary star in the 1960s, then a dissident and pariah in the 1970s (surviving an apparent murder attempt by the KGB), and an exile in 1980.

In 1992, Voinovich returned to a post-Soviet Russia to a warm welcome; in 2001, he received the State Prize of the Russian Federation for his 2000 novel “Monumental Propaganda.” Putin himself presented the award.

Now, Voinovich is a relentless critic of the Putin regime and once again a dissident — or, as he put it in a recent Voice of America interview, a “persona half-grata.” In today’s Russia, that means he can sell his books and speak at literary clubs and cultural centers while remaining mostly ignored by the authorities and the state-controlled media.

The narrator of “The Crimson Pelican,” a writer named Petr Smorodin, is clearly based on Voinovich himself, with a healthy dose of self-deprecating humor. Smorodin calls a medical service for a tick bite that he worries might be infected. The medics insist on taking him to a clinic in Moscow, and so begins a long ambulance ride during which Smorodin falls asleep, wakes up, has fevered visions and can no longer tells what’s real and what isn’t.

Along the way, Smorodin encounters several KGB agents who all go by the generic name Ivan Ivanovich. One turns out to be his Soviet-era interrogator from decades ago, looking not a day older. (“People of my profession,” he explains, “don’t age, we just change with the times.”) He also sees ecstatic crowds celebrating Russia’s annexation of Greenland, Crimea-style, and watches a TV broadcast explaining that Greenlanders are “Russians just like us.” He comes across a long line of dissidents waiting for their payouts at a van marked STATE DEPARTMENT OF THE UNITED STATES OF AMERICA (a swipe at Kremlin propaganda’s portrayal of the opposition as American hirelings), and pro-government demonstrators carrying such slogans as “Obama, hands off my pension.” Finally, Smorodin meets “the top Ivan Ivanovich,” the supreme executive himself — that is, Putin — who is apparently hankering to ditch his job and devote himself full time to caring for endangered birds.

“The Crimson Pelican” is still awaiting its day in English. (Disclaimer: I translated excerpts from the novel, which can be found here). But it’s surprisingly timely in these days of the never-ending Trump-Russia saga; there is even a passing reference to the Putinists’ hatred of Hillary Clinton.

What Voinovich teaches us is that the satire of a reality that seems beyond parody works by ditching reality altogether.

Reading his novels, you can see Voinovich’s understanding of satire evolve throughout his career. He first incurred the wrath of the Soviet regime with the novel “The Life and Extraordinary Adventures of Private Ivan Chonkin,” published in a Russian émigré magazine in the West in 1974 after being rejected for publication in the Soviet Union. (I still remember the thrill of reading an illegal smuggled copy as a teenager not long before my family emigrated in 1980.) “Chonkin,” which later had two sequels and was translated into numerous languages, followed the woes of a bumbling Soviet recruit just before and after the German invasion of the USSR. It skewered both Stalinism and Soviet war mythology while treating its characters with genuine affection and humanity; the New York Times review compared it, among other things, to Joseph Heller’s antiwar classic “Catch-22.”

Voinovich’s later works took a turn toward the fantastic and the absurd. The 1986 novel “Moscow 2042” was a futuristic satire with a time-traveling hero. In the Russia of the future, the economy runs mainly on the recycling of “secondary matter”—that is, excrement, dutifully turned in by loyal citizens. Relatedly, the state’s ideology is a hybrid of Communism, nationalism, and Russian Orthodoxy — secret police officers double as priests — which led many to credit Voinovich with the powers of prophecy, given the merger of religion and state in Putin’s Russia.

“Monumental Propaganda” also has blatantly absurdist elements, including the central premise: its heroine, or anti-heroine, is such a fanatical Stalinist that when her town’s Stalin monument is taken down in the late 1950s following the official denunciation of the “personality cult,” she brings the statue to her apartment. There it stays for years — until it eventually falls on top of her and crushes her to death.

The third part of the Chonkin trilogy, “The Displaced Person” (published in Russian in 2007 and in English in 2012), also veers into the fantastic: one subplot focuses on Stalin’s efforts to protect the terrible secret of his real parentage, namely the fact that he is the product of a man’s unnatural coupling with a wild horse. The absurdity has a point: In a caustic aside, Voinovich notes that it seems even more unimaginable that “such a monster could possibly have been produced by an ordinary human mother.”

If there’s a lesson here for satire in the age of Trump, it can be summed up as: no flight of fancy is too wild—but even the surreal must always be anchored by a deep sense of humanity.

In our conversation on Inauguration Day, Voinovich was somewhat dismissive of Trump-Putin parallels, simply because of the vast differences between the two countries and their political systems. Russia has servile courts, a puppet parliament, and fake elections, so thoroughly fixed that Russians made fun of it in an election-season joke Voinovich told me: “Americans are so dumb, they still don’t know who their next President will be.”

But for all the differences, much of the Russian reality captured in the surreal world of “The Crimson Pelican”—the normalization of the absurd and the appalling, the cynicism and the paranoia, the delusional thinking and the readiness to demonize “the enemy”—now feels all too close to home. Now, we just need our own surreal satire to tackle it—unless Voinovich, who has yet to slow down with age, devotes his next book to the Trump-Russia saga.

Has Trump destroyed satire? Lessons from a Russian dissident.