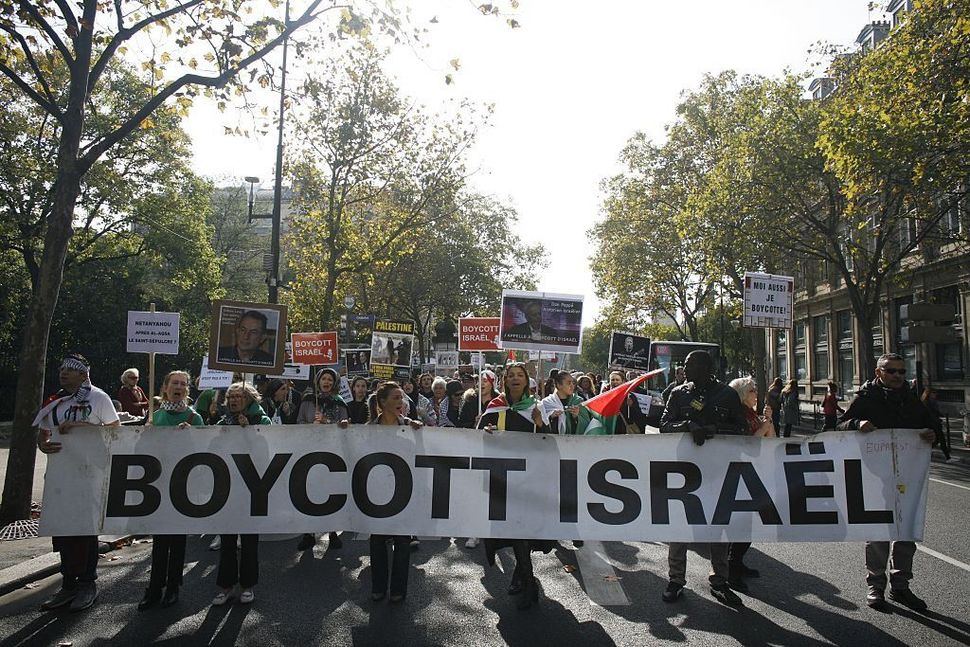 Shocking reports recently emerged from McGill University, where a student named Noah Lew claimed he was voted off of the board of student government for being Jewish.

“I was blocked from participating in student government because of my Jewish identity and my affiliations with Jewish organizations,” Lew wrote in an opinion piece for the Canadian Jewish News.

The case since garnered international attention, with Jewish groups like the Centre for Israel and Jewish Affairs and B’nai Brith echoing Lew’s accusation that those who did not ratify his candidacy for student government acted out of anti-Semitic malice. Meanwhile, McGill’s principal announced she will launch an investigation.

But a closer look at the facts suggests that those who voted against him acted out of political – rather than prejudicial or racial – motives. Rather than being voted off the board for his Jewishness, Lew was voted off for his positions on Israel and his own voting record.

It all started earlier this month. A week before the board was to be voted on, a group called “Democratize SSMU” (which stands for Student Society of McGill University) wrote a Facebook post singling out Lew and two others for conflicts of interest (the other two were not eligible for reelection): 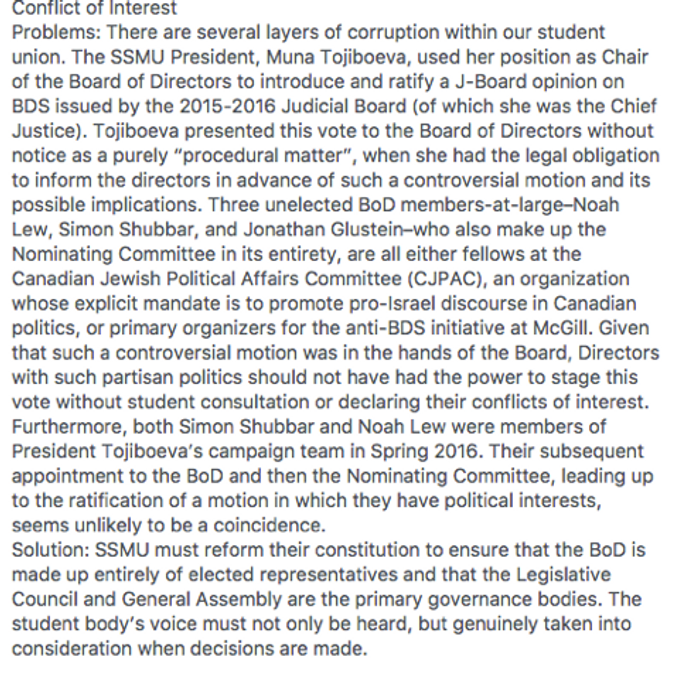 The post alleged that Lew and others “are all either fellows at the Canadian Jewish Political Affairs Committee (CJPAC), an organization whose explicit mandate is to promote pro-Israel discourse in Canadian politics, or primary organizers for the anti-BDS initiative at McGill.”

This placed Lew, according to Democratize SSMU, in a conflict of interest when it came to voting on BDS, an issue that had occupied the board previously.

The Facebook post had the desired effect. When the General Assembly rolled around, Lew failed to gain enough votes to remain on the board. Meanwhile, another, non-Jewish candidate who had also served on the same board as Lew, Maya Koparkar, did make it through the vote.

But at an earlier student government meeting, Koparkar had declared her lack of confidence in the president and her support of the campus reformers. That same non-Jewish president of the board was subjected to a motion for a vote of non-confidence (the motion failed), further undermining claims that anti-Semitism was afoot.

Furthermore, the Facebook post itself had nothing to do with Lew’s Jewishness, which was not mentioned once. Instead, the post relied on his (public) affiliation with CJPAC and his actions as part of the board, undermining his credibility, in their eyes. In September, the Board of Directors — on which Lew was serving — ratified a decision ruling BDS resolutions to be unconstitutional.

It is completely fair – and not at all anti-Semitic – to claim that a candidate for the board of student government like Lew with a history of Israel advocacy and affiliations might have influenced this vote against BDS and therefore that he might do so in the future. Having engaged with a group like CJPAC in the past, Lew would both be seen as mostly likely opposing BDS resolutions — as he had in the past — from his position on the board. That’s a platform — not an ethnic identity, and fair game for elections.

Here’s the thing. While I don’t think Lew’s dismissal was racially motivated, I do not deny that Lew experienced this series of events as anti-Semitism, and the McGill community must take this seriously – especially given the recent past. When Lew failed to win reelection, the campus was still reeling from the “punch a Zionist” directive that a student government official had tweeted last year, following a move by the McGill Daily — the main student newspaper — to ban Zionist viewpoints from its pages.

These cases were much more incendiary than Democratize SSMU’s Facebook post. But what the Lew affair teaches us is that tone and framing matter, and emotions around identity run high. Activists need to take care not to be perceived as inciting hatred, even when they are certain they are not.

It’s a message Democratize SSMU has clearly internalized. The group has since apologized for the tone of its Facebook post, which has been deleted.

But the Lew affair raises another important issue. Most mainstream Jewish organizations are Zionist, and Zionists tend to oppose BDS. If supporting BDS isn’t anti-Semitic, is opposing someone for their Zionist affiliations anti-Semitic? Is it anti-Semitic for a candidate’s pro-Israel activity to be a central reason why some voters reject their candidacy?

Grilling candidates on philosophical litmus tests is indeed a problem. But that’s not what happened here. CJPAC is a pro-Israel political organization. Those involved with it may be viewed by the student electorate as seeking to advance similar positions without voters being accused of racism. Most importantly, one’s record on BDS would matter to those in the student electorate who want to have a say on where their university invests.

In campus politics, positions on an array of issues — the Vietnam War, South African apartheid, sweat shops, fossil fuel divestment, and now, BDS, have long been seen as relevant. While student governance mostly focuses on issues of everyday concern to students, the campus community — especially when it comes to issues of investment and divestment — have a right to see their student government as having a say on an array of global issues.

The case of McGill reveals nothing more unsavory than politics at its most passionate.