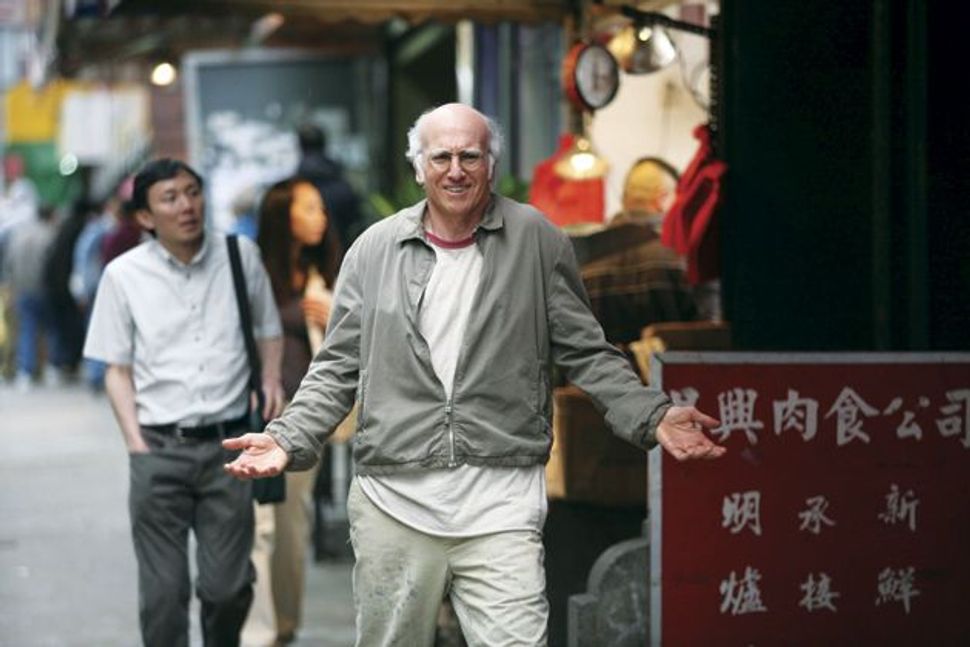 What? What?!: Larry David is right, everyone else is wrong, get it? Good. Image by JESSICA MIGLIO/SONY PICTURES

Last Saturday night, Larry David delivered a monologue on Saturday Night Live (SNL) that included jokes about Harvey Weinstein and picking up women in a concentration camp, among other things.

Many publicly denounced the monologue as heresy. Some went so far as to insist that no one should ever make another Holocaust joke ever again; the material is off limits under all circumstances.

Certainly, Jews aren’t the only ones to poke fun at their own legacy of suffering. Take, for example, Keegan Michael Key and Jordan Peele. The bi-racial half-black comedians have an incredibly provocative and powerful sketch about two slaves who could not be sold at auction.

Should the NAACP have stepped in and called the sketch an offense to the memory of slaves? Should they have proclaimed that slavery has no place in comedy?

And what if they had declared it “unfunny”? It has twenty-seven million views on YouTube and their Comedy Central series from which it originated — “Key and Peele” — won a Peabody Award and was later nominated for several NAACP image awards.

Or what about SNL’s Pete Davidson, the son of a fireman killed on 9/11? He infuses social media posts about his father with humor. He famously cracked on the Comedy Central Roast of Justin Bieber, “I lost my dad on 9/11, and I always regretted growing up without a dad until I met your dad, Justin. Now I’m glad mine’s dead.” Should some governing body call Pete and let him know his humor is not only not appreciated, but unfunny and off limits?

Bringing it back full circle to the Jews and Holocaust humor, should Mel Brooks have not made The Producers? Brooks has always said, “The only way to get even with anybody is to ridicule them.” I extend that conceit to David’s monologue, for the situational humor found therein is indeed ridicule, in the form of shining a light on how inhumane and unfathomable the Holocaust was. His Holocaust joke comes in character, as a man in a camp being rejected by a woman. “Is it me, or is it just the whole thing?” The man asks.

Perhaps David’s asking all of us the same question, throwing himself under the bus in an effort to keep the memory alive, in his own raw, comedic version of “Never Again.”

I stand firmly behind the ADL and their mission, which is clearly stated on its site, and includes their commitment to “Combat Hate & Protect Communities,” and “Fight Anti-Semitism,” and “Confront Discrimination & Secure Justice.” What I don’t see is a section laying out their role to “Tell Us What’s Funny!” Nor do I want to. At least not at adl.org. While it makes sense for the ADL to talk about what is offensive and insensitive, the question of whether something is funny is decidedly out of the realm of their expertise.

What we should be talking about is the lens through which the humor emanated. It was an authentic lens, a true lens — crucial for good comedy. I guarantee that the scenario put forth in the monologue — a man hitting on a woman in a concentration camp — is an authentic Larry David thought. He’s a comedian, and comedians share what’s in the deepest, darkest chasms of their minds.

Louis CK has an infamous joke: “You can figure out how bad a person you are by how soon after September 11th you masturbated, like how long you waited. And for me it was between the two buildings going down.” Like David’s concentration camp run, this is a personal, honest response that Louis thought was darkly funny and chose to share in a comedic forum.

And if you don’t think it’s funny, turn off the television or change the channel or go do some goat-yoga instead. But don’t — as the head of an institution meant to protect people — go out into the world and endeavor to regulate what’s funny. Because that’s attempting to protect people from the wrong thing. Individuals get to decide what’s funny, not organizations. If this emerging pattern is embraced as an acceptable form of behavior, it brings us one step closer to censorship, and works to erode the foundations of free speech.

It’s okay to be offended, and to label certain jokes insensitive. But to institutionally declare them unfunny, or suggest that certain topics are unallowable, is the actual crime against comedy, and more importantly, a crime against humanity.

And by the way, I vote for Mel Brooks to update The Producers, and this time to include a Busby-Berkeley-style number about those ass buckets parading around in the streets of Charlottesville.

Jay Karas is a feature film and television writer/director and has also directed numerous stand-up specials.