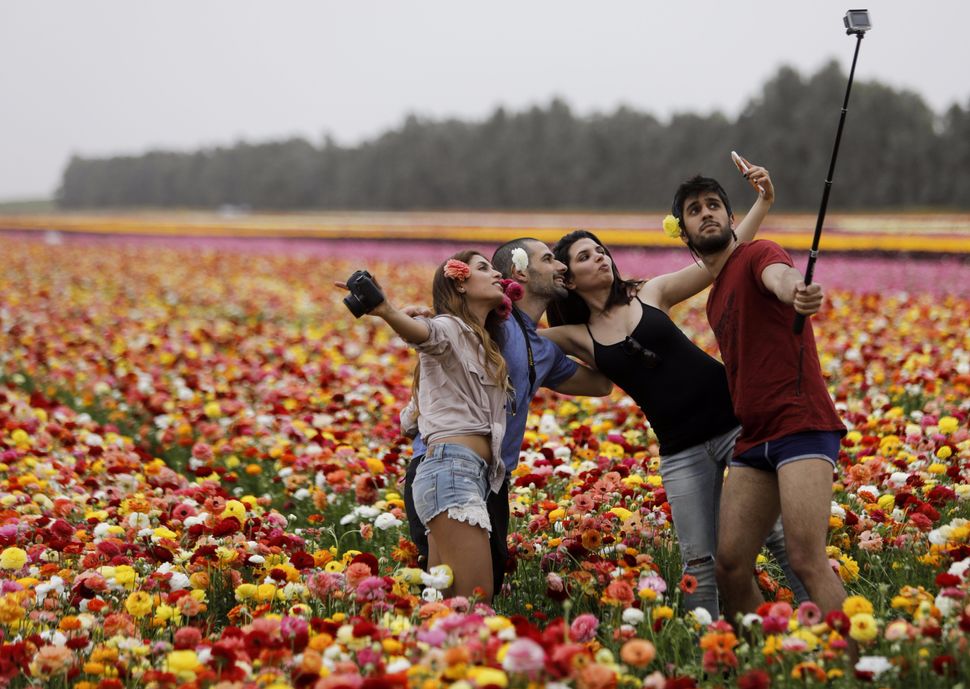 Imagine a peaceful future 60 years from now with two states side by side, an Israel and a Palestine. The democratic State of Palestine sits on 95% of the West Bank and all of Gaza. It has a Palestinian majority, but there are also Jews living in towns, formerly known as “settlements,” and they constitute 20% of the population. Those Jews experience some discrimination, but enjoy a relatively good life.

Since international assistance was terminated once the state was established, Palestine of 2077 relies on its widespread diaspora to help with business, fundraising and diplomatic relations. However, many descendants of Palestinians have lost touch with the homeland, and the future looks sketchy.

So a few wealthy Palestinians come together with their government to fund a program called “Birthright Palestine.” This 10-day visit provides the young foreign guests with a mix of fun, travel and religion, with a focus on honoring Palestinian heroes and martyrs.

But, Birthright Palestine fails to include trips to visit Jewish residents. They tried it for a while, but the visits undermined the overall experience, and apparently some were quite hostile to the state, so they were stopped.

Is that acceptable? Is it bigoted? Is it a mistake that shortchanges diaspora Palestinian youths?

This set of questions applies to the real Birthright program, too. When the program’s leaders recently decided to stop, at least temporarily, visitors’ encounters with Israeli Arabs, politicians and media outlets went nuts. Breathless articles in Haaretz and op-eds galore in Jewish media criticized Birthright for shortchanging Jewish young adults and for attempting to cover up unsavory aspects of Israel. One went so far as to accuse Birthright of undermining Israeli democracy.

Underlying these criticisms is the notion that in keeping its focus on Jews in Israel, Birthright is espousing bigotry. This is nonsense.

Gil Troy and Gidi Mark, leaders at Birthright, have indicated that the encounters have been terminated because attendees have complained about lectures being too long. They also complained of being lectured at, rather than conversed with, by poor English speakers to boot. Troy also indicated that the termination may be temporary as they re-evaluate.

Since the announcement, Birthright organizers must be feeling the heat, especially since the head of the Reform movement, Rabbi Rick Jacobs, has been publicly critical.

But unwittingly, and no doubt with good intentions, Jacobs is undermining his constituents.

Birthright should not permit itself to be hijacked by those who seek to have an entirely unrelated narrative take a piggyback ride on this expensive, important program for young Jews. The Birthright program is an introduction to Jewish history, Jewish culture, the Hebrew language and the revitalization of Jewish life in this people’s historic homeland. Most of the young visitors have a tenuous connection to Jewish life and to Israel, and the trip provides a bare 10 days to make an initial, relatively superficial acquaintance with a rich history. Ten days is a short visit, and the work is great.

There is absolutely no reason that Birthright must include non-Jewish lecturers. Of course, Birthright can offer encounters with non-Jewish Arab citizens; it’s certainly not unreasonable for them to do so. But to demand such encounters, especially when some Arab Israelis are extremely hostile to the state, is entirely wrong.

Now, there are those for whom Israel is forever tainted because it was born of a war. They are convinced the war, which continues to this day, defines Israel. But it is merely one element of what defines Israel, and far from the most important one. Nevertheless, much — if not most — of the exposure these young people have had to Israel from the media has been about this aspect of Israel. Is it so wrong for a trip to be devoted to showing Israel’s other aspects? Indeed, Birthright was established, in part at least, to counter anti-Israel attacks, which have consumed the dominant discourse on many campuses across North America and the Western world. Birthright is a solution and a counterweight. And that is precisely why it should avoid programming that undermines its goals.

There is little public information about who has been meeting with Birthright participants, but since this story broke, one of the Arab lecturers has been identified. A resident of east Jerusalem, Zizi Abul Hawa told Haaretz that the word Birthright makes him “nauseous.” And what does he think of the Jewish youths he’s lecturing, the ones the Jewish community is paying a fortune to send to Israel? “I would lie if I said that I didn’t enjoy seeing those poor faces drop as I burst their bubbles,” he said of the young participants. “I still don’t know why I was repeatedly invited to meet with Birthright groups. I represent everything they’re against.”

Please, let’s stop with the naiveté. Yes, Israel is in a conflict. And yes, there are social problems in Israel. But a 10-day introductory trip that is subsidized by the Jewish community is not the place to have this inculcated into attendees.

Birthright is a celebration of being Jewish, of our history and of young Jews’ connection to their historic homeland. It is a discovery of Zionism, an incredible project that has resurrected our ancient language and established, at great cost in blood and sweat, a home and refuge for millions of Jews. Yes, true, there are some who view Israel negatively and would like to interfere with this celebration. Tell them no. Tell them they are wrong. Tell them that this is a trip of joyous discovery. There will be plenty of time after the trip to get into the conflict’s details.

Daniel Kohn lives and writes in San Diego, and now has five followers, two of whom he suspects are bots, on his new Twitter account, @danielkohn99