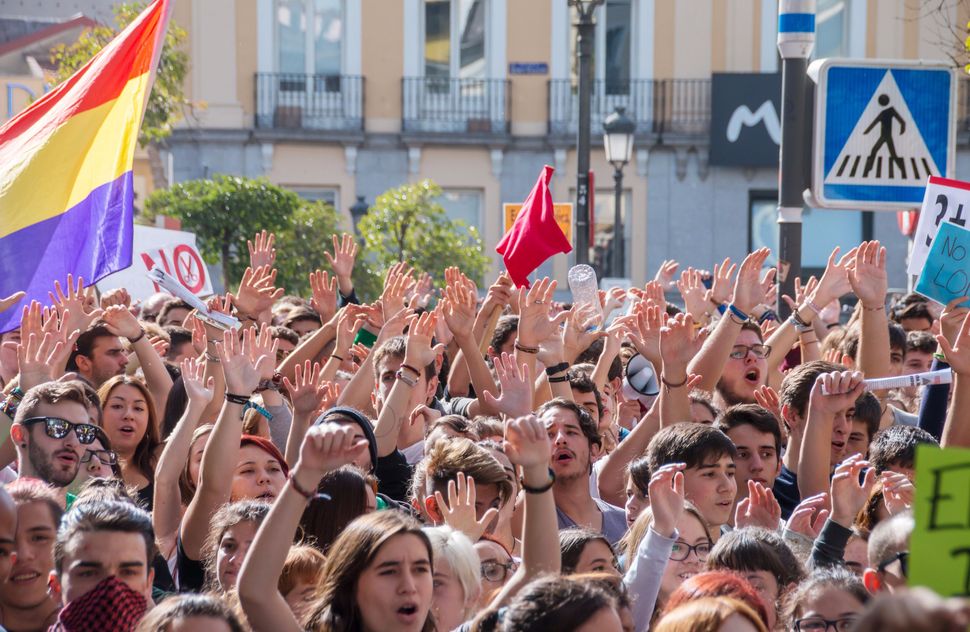 In 2016, an outspoken BDS advocate ran for the presidencyof the UK’s Union of Jewish Students.

He got smoked, coming in last place with less than 10% of the vote. It turns out that young Jews, much like middle-aged and old Jews, don’t like BDS that much.

Nothing like this could happen in the United States. The reason isn’t because BDS is more popular here among the Jewish student set. The reason is that Jewish university students aren’t represented by a democratic body, like the UJS. Instead, they’re represented by Hillel International. And increasingly, that’s becoming a huge problem.

If it is to stay relevant amongst American Jews, Hillel’s national office needs a huge dose of a quintessential American value: democracy.

As it stands, Hillel lacks democratic legitimacy. Its policies are not set by the community it claims to represent, and therefore it can’t credibly refute a small but very loud minority which claims that their anti-Zionism is representative of their generation. In the UK, that hypothesis can and was put to a vote, and it was decisively rejected. In the US, there is no similar opportunity for voting, and thus no opportunity to conclusively establish what young Jews nationwide actually think on the hot-button issues—regarding BDS, Israel advocacy, the Trump administration, the rise of the alt-right, and more—that consume so much attention in Jewish campus life.

And just as Hillel lacks democratic legitimacy, it also lacks democratic accountability. One of the advantages of democratic governance is that if leaders promote policies at odds with constituent desires, they can be tossed out and replaced with better ones. But Hillel’s leadership can’t be replaced by its nominal constituents, because Jewish students have virtually no input or influence on Hillel’s leadership structure or national policies. It’s thus unsurprising that Hillel’s policies seem designed to appeal to older Jewish donors, not the young university Jews they are purporting to serve.

To be sure, the issue isn’t just at the university level either. American Jewish communal organizations in general exhibit a massive democracy deficit. During the Obama administration, Jewish organizations exhibited nearly wall-to-wall opposition to an Iran Deal that actual American Jews backed by a twenty point margin.

More recently, an explosive Forward exposé detailed how fear of right-wing donor backlash kept many mainstream Jewish groups from calling for the ouster of alt-right firebrands Steve Bannon, Sebastian Gorka, and Stephen Miller from the Trump administration. All three of those figures are no doubt reviled by the overwhelming majority of American Jews. So why is it that Jewish organizations are kowtowing to the tiny fringe of the community that backed Donald Trump?

Instead, we live in a world where American Jewish organizations are terrified to publicly adopt the positions of American Jews.

Still, Hillel represents a particularly egregious case—not the least because there is such an obvious disconnect between the constituency Hillel claims to serve and the donor class to whom it is actually accountable. Nowhere is this problem more evident than in the application of Hillel’s notorious “Standards of Partnership”.

To be clear, there are perfectly good arguments that Hillel should have standards delineating what groups it is willing to sponsor. The issue is not that Hillel should devolve into an open-mic night. The issue is that, in applying these guidelines, Hillel has acted in a completely asymmetrical way. It polices left-wing groups to the letter while letting the right run wild.

Under the guidelines, Hillel disaffiliated from a Jewish LGBT group at Ohio State for cosponsoring a non-BDS related event with fifteen other student groups because one of them happened to be Jewish Voice for Peace. Meanwhile, a nascent attempt at Princeton Hillel to actually apply these guidelines evenly to right-wing Israeli speakers alleged to have engaged in racist speech (explicitly prohibited in the guidelines) resulted in local and national Hillel leaders issuing a groveling apology, confessing error and begging forgiveness. Amazingly, nowhere in their prostration did the Hillel leaders actually argue that the speaker in question didn’t violate the Partnership Guidelines (I take no stance on whether the speaker, Israeli Deputy Foreign Minister Tzipi Hotovely, does or does not). Rather, they basically declared that, by definition, a conservative voice holding Israeli government office couldn’t violate the partnership guidelines.

What progressive Jews have long suspected has been officially borne out: the range of Jewish discourse Hillel is prepared to accept has only a left-wing border.

The disjuncture between what campus Jews want and what campus-oriented Jewish organizations offer has stark impacts. A recent Stanford study exploring why many Jewish students do not publicly identify with Jewish campus life found that overheated discourse about Israel—from all sides of the issue—caused many to simply “stay on the sidelines.” Students felt that virtually all campus discussion on Israel (“pro-” or “anti-”) was hostile, us-versus-them, lacking in nuance, oriented towards points-scoring, and just generally alienating. To the extent the Jewish community partook in that sort of scorched-earth advocacy, they want no part in it. So they abstain.

Put another way, young campus Jews don’t hate Israel. But they absolutely hate the way Israel is talked about on campus—by strident anti-Zionists, yes, but also and equally by representatives of national Jewish organizations.

The latter often demand take-no-prisoners policies that play well to panicked donors hopped up on tall tales of Jewish students under siege. But they are completely disconnected from the actual pulse of Jewish college life.

Were Hillel democratically accountable to the students rather than the donors, those policies might change. Since they’re not, they never will.

It’s no wonder than even BDS opponents among young progressive Jews are starting to flirt with ideas like Open Hillel. Most young Jews may oppose BDS, but they also find the manner in which groups like Hillel treat it to be overbearing, even histrionic, and often seemingly calculated to alienate. Particularly for more casual onlookers, the idea of a more “open” discussion appeals, not because they find BDS particularly compelling, but because they find the way Hillel and other mainstream Jewish treat the question to be wildly counterproductive. Open Hillel, if nothing else, offers the chance to reallocate decision making authority away from a donor-class completely disconnected from campus life and into the hands of actual Jewish university students.

Open Hillel’s appeal lies in its challenge to Hillel’s increasingly moribund and unrepresentative institutional structure. And one of its principles is “Democracy and Democratic Accountability in the Jewish Community.” But it has yet to face a true test of this principle. What if Jewish students came to a democratic agreement with Hillel that BDS is beyond the pale? The problem, in short, isn’t that it’s illegitimate for Hillel to have rules. The problem is that it’s entirely illegitimate for the rule makers to be wholly insulated from those they purport to speak for.

In making these proposals, I by no means intend to disrespect Hillel’s professional staff, which often does superb work under trying conditions. But policymaking power, at both the local and national level, should be in the hands of Jewish students, not a professional and bureaucratic class.

There’s nothing stopping Hillel from ceding more power to its students; other 501(c)(3)’s, like J Street U and Students Supporting Israel, elect powerful student boards. But if Hillel’s leadership is unwilling to let go of the reins of power, then perhaps it is time for Hillel to pass the torch to other, more representative organizations. The American Union of Jewish Students (AMUJS) has reemerged from many years of dormancy and offers a democratic alternative on the model of the Jewish Student Unions one finds in the UK and at many universities around the world. It currently is operating primarily in the New York/New Jersey area, but hopefully it can gain more traction as a democratic alternative to Hillel’s hidebound aristocracy.

Should Jewish student organizations invite BDS speakers, or Tzipi Hotovely for that matter, to campus? That’s a complicated question. What’s not complicated is who should answer it: the Jewish students themselves. If a national-level policy is needed, it should be decided by a national and democratically-accountable Jewish student body. It’s a simple proposal, but a bold one.

Correction: An earlier draft of this article failed to adequately capture Open Hillel’s commitment to democratic principles. The article has been updated to reflect this.

David Schraub is a Lecturer in Law at the University of California, Berkeley. He blogs at The Debate Link, and can be followed on Twitter @schraubd.