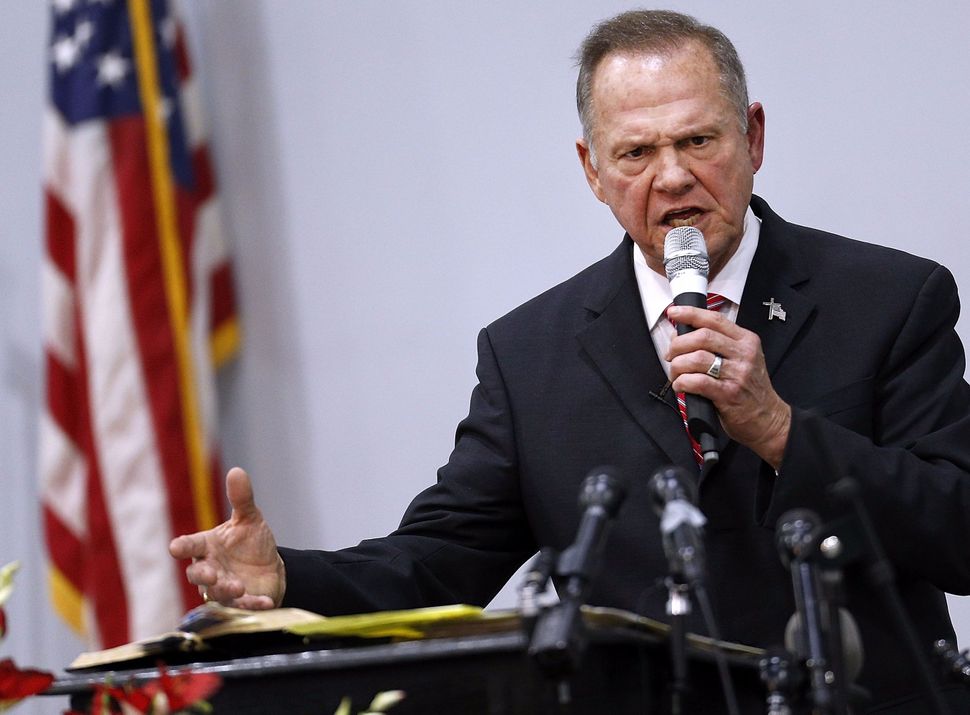 If Roy Moore is guilty of sexual assault — and the evidence is mounting — that would constitute a stunning indictment of a leading candidate for the U.S. Senate, arguably, one of nation’s most prestigious and elite governmental bodies.

Let that sink in for a moment. Republican officials are calling on Moore to drop out, but polls are all over the place, with some showing Moore in the lead. The NRSC released a poll on Thursday showing Moore down by 12, but Moore leads Democratic opponent Doug Jones by six points in Tuesday’s FOX10 poll and by 10 in an Emerson poll. JMC Analytics and Polling has Jones leading by four, within the margin of error.

How is this possible? Let’s set aside the bigoted view espoused by some in the liberal elite that the entire Republican party and the South more broadly is misogynistic. Why are so many people — including women — supporting this man despite the allegations and the media coverage?

A recent Politico article credited President Trump’s war on the media for this phenomenon. According to reporter Jason Schwartz, Moore has exploited a discredited media to paint the accusations as a political witch hunt. Schwartz writes: “Two years of attacks on ‘fake news’ media give the Alabama candidate a strategy for countering abuse allegations.”

But President Trump doesn’t deserve all the credit — or all the blame. If the media wants to know why serious investigative journalism on the potential sexual assault of minors isn’t being taken seriously, they need to look in the mirror.

Mainstream media outlets like Politico, the Washington Post, CNN, and others, have long overstepped the line between opinion writing and dispassionate, disinterested reporting. No one was surprised when reporters at major outlets gushed openly about President Obama’s election in 2008 (and afterwards). That’s because it’s no secret that your average reporter at the New York Times or Washington Post leans, or reclines, to the left.

But the 2016 election cycle took things to new extremes. The previously open secret of journalistic flirtation with the left turned into a full-fledge rejection of the separation between personal conviction and journalistic integrity. The donkey was completely out of the bag.

Over the past three years, journalists for erstwhile-respected outlets have shared personal political opinions, moral indignation and sometimes offensive ad hominem attacks, both on social media and on the air.

In 2016, the right wing Daily Caller compiled a laundry list of mainstream reporters who turned their social media accounts into opinion columns. And if you think that was biased, a year later, the Washington Post published its own version. Examples range from the tame to the absurd.

“Trump’s constantly contradictory rhetoric requires a lot of cognitive dissonance — but only if you presume he means anything he says,” speculated then-Politico reporter Eli Stokols on Twitter.

MSNBC’s Benjy Sarlin added on Twitter, “The revisionist history in a few years of the racist elements of Trump’s run is going to be epic,” and CNN host Reza Aslan called the president of the United States a “piece of sh*t” in a tweet. Even veteran journalist Bob Woodward scolded the media for “binge drinking the anti-Trump Kool-Aid.”

On the flip side, Wall Street Journal news editor Gerard Baker was attacked by his compatriots in the news business when he dared to instruct his reporters to “just stick to reporting” on Trump in the wake of the Charlottesville tragedy, rather than “packaging” reporting in “exegesis and selective criticism.”

Some of the most egregious journalistic violations have been met with swift punishment, including a New York Post reporter who was fired for comparing Trump’s inauguration to Pearl Harbor and a Politico reporter who lost her job for tweeting, “Either Trump is fucking his daughter or he’s shirking nepotism laws. What’s worse?” But too many reporters tweet equally biased comments, without the R-rated language and without consequence.

Let’s be clear. The president isn’t blameless here. The way he talks about the news industry is anything but presidential. But there’s enough blame to go around. The mainstream media gave the president the rope with which to hang themselves. And it was a very, very long rope.

The media has attacked President Trump’s treatment of the press, arguing — correctly — that a free and flourishing press is the foundation for a healthy, functioning democracy. The Washington Post’s new motto — “Democracy Dies in Darkness” — is a heavy-handed attempt at hammering that point home. But President Trump is not the culprit — or the only culprit. The media is doing a fine job of neutering its credibility on its own. It is, to some extent, a self-imposed darkness.

Unfortunately, our society is worse off when that happens. There are real stories that demand to be unearthed and there are good, solid journalists doing the unearthing. In the age of #FakeNews, these stories and these journalists will be tainted.

This is hardly a defense of Roy Moore, nor his supporters. If true — and it sure seems like it is — Roy Moore’s actions are beyond the pale. But there are real costs to the media shirking its responsibility, and in this case, it may be a Senator Roy Moore. The media has cried wolf one too many times, and now, when the wolf finally shows up, we may find out that there aren’t enough people listening.

The greatest danger to journalism today isn’t Trump’s “war on the media.” It is the death of unbiased, objective news reporting, and that death ought to be ruled a suicide.