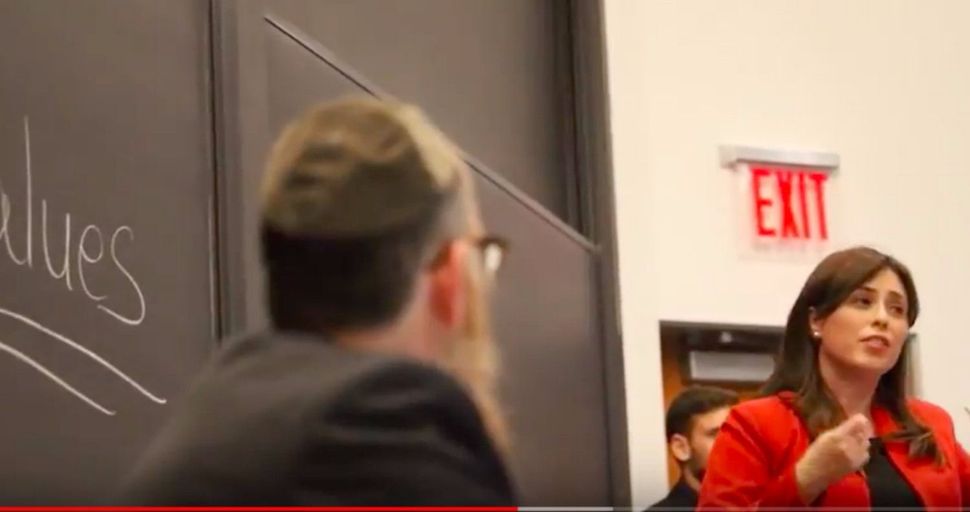 Israel was thrown into an uproar on Thursday, complete with screaming headlines and threats of a cabinet shakeup, over a crisis in the Jewish state’s relationship with the American Jewish community. Ironically, most American Jews didn’t hear they had a crisis. It was Thanksgiving, Jewish agencies were shut down and it wasn’t on the local news.

The crisis was triggered by an angry televised attack on American Jewry as a group by Israel’s deputy foreign minister, Tzipi Hotovely, a self-described religious nationalist and rising young (age 38) star in the ruling Likud Party. In an interview on the English-language i24 channel, Hotovely claimed that American Jews “never send their children to fight for their country. Most of the Jews don’t have children serving as soldiers, going to the Marines, going to Afghanistan or Iraq.”

She continued: “Most of the people have quite convenient lives. They don’t feel what it’s like to be attacked by rockets, and I think part of it is to actually experience what Israel is dealing with on a daily basis.”

Hotovely had been asked about her November 6 visit to Princeton University, where her scheduled lecture at the Hillel Center for Jewish Life was canceled at the last minute due to protests by a left-wing Jewish student group. She ended up speaking at Princeton Chabad instead. Hillel leaders later apologized, for the cancellation.

The deputy minister also dismissed Diaspora protests over her government’s cancellation of a plan for egalitarian prayer at the Western Wall. She called the protests “political” and argued that there is a “beautiful place” already designated for egalitarian prayer — a makeshift space that the government promised to improve — but that “most of the time it is empty” because “most of those people aren’t even interested in going to the Kotel.”

Hotovely’s televised attack prompted its own flood of Israeli protest. She was criticized for undermining Israel’s relations with its essential ally in statements from the heads of Israel’s Reform and Conservative movements, politicians who work with Diaspora Jews and families of Americans who have fallen while serving in the Israeli military.

More American objections had been rounded up by Friday morning, but Israel had largely moved on.

Prime Minister Benjamin Netanyahu, who doubles as foreign minister and is technically Hotovely’s direct supervisor, issued a statement in Hebrew Thursday morning, saying “The Jews of the Diaspora are dear to us and they are an inseparable part of our people, and there is no place for such an attack, and its words do not reflect the position of the State of Israel.” There were anonymous, unconfirmed reports from the prime minister’s office that Netanyahu was considering firing Hotovely.

The deputy minister later issued a clarification, claiming that her words had been quoted out of context. She acknowledged American Jewry’s “extremely significant” contribution to Israeli life, but noted that the two communities are “distancing” because of “a different reality of life.”

The chief of staff of the U.S. Air Force, General David Goldfein, is Jewish, as is General Steven Blum, the past chief of the National Guard Bureau. Among the most prominent Jewish veterans today are Rep. Lee Zeldin of Long Island and Ohio Senate candidate Josh Mandel.

In all the uproar, few seemed to address the issue at the core of her complaint, her cancellation by Hillel. Hotovely claimed at the time that her lecture had been canceled because some students “didn’t agree with my views.”

“This is something really bad that is happening under what I call the liberal dictatorship,” she said on Israeli television at the time. “Young people at the top Ivy League universities are not willing to open their minds.”

The group that led the Princeton protest, the Alliance of Jewish Progressives, had complained in a petition to Hillel that Hotovely’s right-wing and allegedly racist views on Palestinians violated Princeton Hillel’s policies on Israel-related events, which are based on Hillel International’s “standards of partnership.”

They went on to charge that the standards were in effect used to bar left-wing speakers but not rightists, citing speakers they had proposed in the past and been turned down. Last spring, Hillel turned down a request by the local J Street U chapter to host a photo exhibit by Breaking the Silence, a group of Israeli ex-soldiers who try to expose Israeli military abuse.

Following the Hotovely cancellation, leaders of the protest group told Haaretz that they “never meant to get the event canceled or prevent Hotovely from speaking” but rather to “highlight the hypocrisy” in the way the standards were applied to the left but not the right.

The incident is a reminder of the numbing complexity of divisions among Jewish communities, between Israelis and Americans and within both communities, that all converge on the Israelil prime minister’s office. Emotions are still running at a fever pitch among American Jews — the non-Orthodox ones, at least — over Netanyahu’s backtracking last spring on the Western Wall agreement after three years of negotiation.

Netanyahu dropped the agreement under intense pressure from his ultra-Orthodox coalition partners, for whom Conservative and especially Reform Judaism are heresies whose open practice at Judaism’s holiest site would be a desecration. That in turn is a reflection of the growing political power of the ultra-Orthodox community, barely 12% of Israel’s population, as the balance of power between the right-wing and center-left political blocs. Netanyahu is currently in the midst of a cabinet crisis over Orthodox demands that maintenance work on Israel’s rail lines be halted on Saturday, snarling weekday traffilc on one of Israel’s most important commuter corridors at enormous cost.

Under the circumstances Netanyahu has little wiggle room to accommodate the demands of American Reform Jews. It doesn’t help that non-Orthodox American Jews, overwhelmingly liberal, are a serious irritant in the conservative Israeli leader’s robust ties to the American right.

In the initial rush of Israeli reporting Thursday morning on the Hotovely interview, one news show looked for background analysis by phoning a spokesman for Israel’s Diaspora Affairs Ministry. The spokesman, Haggai Elitzur, had little to say about Hotovely, not surprising since his boss, the minister of Diaspora affairs, is Naftali Bennett, leader of the far-right, religious-nationalist Jewish Home party and a close ally of Hotovely. In his double role as minister of education, Bennett is currently on a major campaign to bar Breaking the Silence from appearing in Israeli schools, echoing Princeton Hillel’s action last spring.

American Jews won’t be hearing much from Hotovely in the next few months, but the larger crisis isn’t going anywhere.