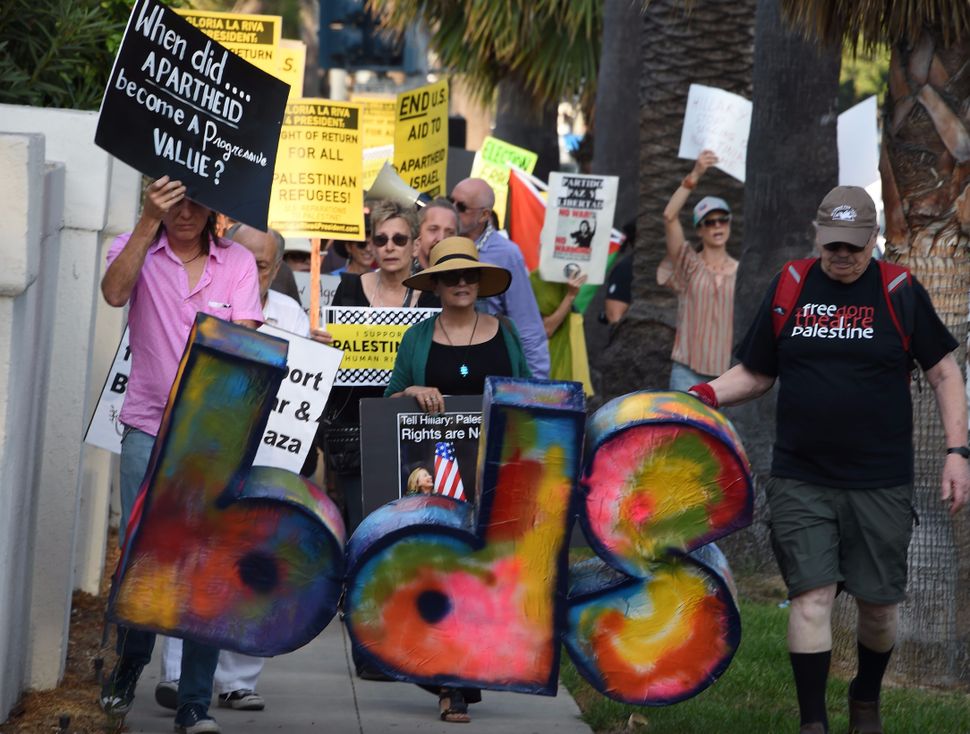 Fighting the Boycott, Divestment and Sanctions Movement has become a primary focus of US Israel advocacy. As BDS resolutions come to a vote on campuses across the country, the issue dominates how we talk about Israel. This is to our detriment. The single-minded focus on BDS in fact only makes it harder to fight, and distracts us from the critical issues that are fueling its rise.

Usually, when BDS resolutions come to a vote on campus, the mainstream pro-Israel community works to create a well-funded coalition of pro-Israel groups to push back against the BDS movement’s goals and its arguments. They believe that by investing significant resources to directly confront the resolution, BDS will be roundly defeated.

Sometimes this works, but increasingly often, it doesn’t. Here’s what usually happens instead. Rather than debating meaningful issues, students and community members spend weeks locked into polarizing arguments about the merits of BDS as a tactic.

Whether the BDS resolution in question wins or loses, the extreme voices on both sides end up the real winners. The far-right uses the debate to fear-monger, paint all critics of Israel as hostile and raise millions of dollars for extreme pro-Israel groups. These resources then go to other counterproductive anti-BDS fights efforts to advance a right-wing, pro-settlement agenda.

On the other side of the equation, the attention high-profile BDS fights attracts draw scores of new supporters into the BDS Movement. Left-leaning groups like Students for Justice in Palestine and Jewish Voice for Peace benifit by claiming a moral victory. And after all that, universities almost never actually implement BDS resolutions.

Whatever the outcome, the majority of Jewish students, who support Israel’s Jewish and democratic future and oppose the occupation, end up feeling alienated, frustrated and defeated. Their attempts to work in coalition with progressive groups become even more fraught.

Above all, even when BDS resolutions pass, the situation on the ground continues to deteriorate. Israelis who have to confront fear and terror and Palestinians living under occupation are no better off. That’s why fixating on the fight against BDS, rather than addressing the conflict itself, is hollow and counterproductive.

If pro-Israel leaders actually wanted to undermine the BDS Movement and make life better for Israelis and Palestinians, they should take their cue from a recent report from the ADL and the Reut Institute. The report concluded that the majority of students who are being persuaded to join the BDS Movement are not actively hostile to Israel itself. Rather, they are susceptible to being drawn into the BDS movement out of concern for the occupation in the West Bank and Israeli government policies towards the Palestinians.

The pro-Israel community will not succeed in keeping these students away from BDS by beating them over the head with pro-Israel talking points, nor through the well-financed responses of anti-BDS coalitions. They will only be effective if they actually work to confront the occupation.

All too often, we see the opposite: communal leaders fall into the trap of allowing the debate around BDS to distract them from the situation on the ground. On this, they echo the Israeli government, which regularly invokes BDS as an existential threat. This is despite the fact that Israel’s own security experts have made clear time and again that it is not the slim accomplishments of the BDS movement, but the ongoing occupation that is jeopardizing Israel’s future as the democratic homeland of the Jewish people.

The American Jewish community can and should invest as much of its time and resources in fighting for a two-state solution and for an end to the occupation, as it does in fighting BDS.

Doing so would give real weight to the community’s stated commitment to supporting Palestinian self-determination and securing Israel’s Jewish and democratic future. This kind of investment from the American Jewish community might even help to encourage real diplomatic progress on the ground, which would, in turn, go a long way to satisfying the concerns of all but BDS’s most extreme partisans.

BDS holds such sway over the American Jewish community because Israel is so dearly important to us, and because we are so deeply concerned for its future. But in the no-holds-barred fight against BDS, we have lost sight of the bigger picture.

Ben Elkind is the Director of J Street U.