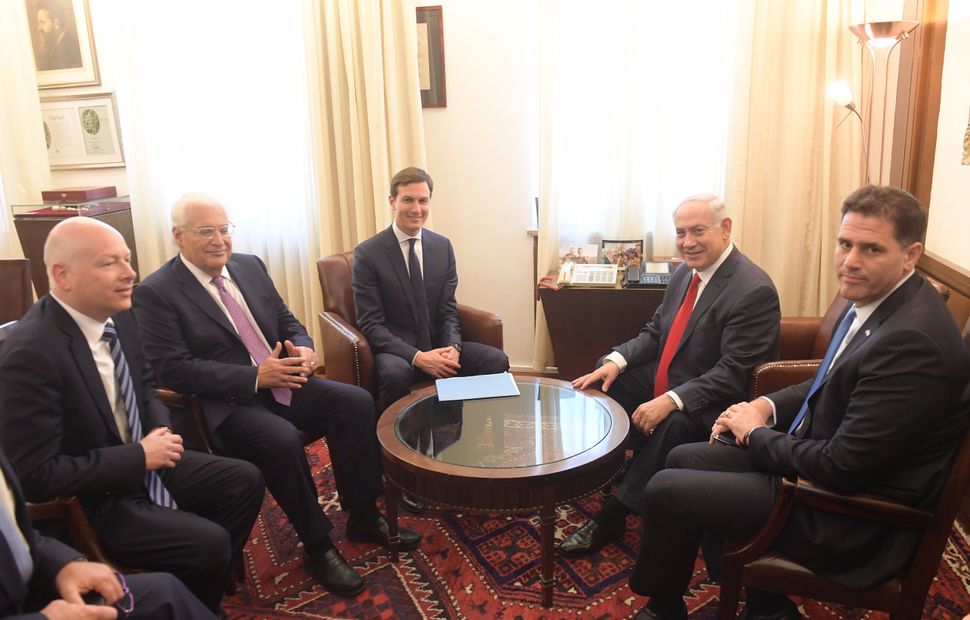 Robert Mueller’s investigation into the Trump campaign’s possible collusion with Russia took a surprising turn on Friday — to Israel. Anonymous White House sources claimed that Jared Kushner was the unnamed Trump transition member who sent the former national security adviser Michael Flynn to talk to the Russian ambassador and other foreign diplomats about a controversial United Nations resolution that would have certainly harmed Israel.

That resolution was Resolution 2334, which effectively declared any Israeli neighborhoods beyond the 1949 Armistice lines (the Green Line) to be illegal under international law. It also demanded that Israel “cease” all settlement activity, and it declared all the land beyond the 1967 lines to be Palestinian.

In the waning days of his presidency, Barack Obama chose not to use the critical U.S. veto on the Security Council to stop the Resolution from being passed, and Flynn’s mission, allegedly put to him by Kushner, was to influence the Russians and other governments on the council to delay or defeat it.

The legality or illegality of Kushner’s alleged actions notwithstanding, it will be both ironic and unfair if battling 2334 brings down Kushner.

For starters, past presidents have also communicated with foreign governments during their transitional periods, sometimes in circumstances that challenged their predecessors’ foreign policy. Eisenhower’s transitional administration secretly organized a visit to Korea. Likewise, Henry Kissinger made a secret trip to North Vietnam during Nixon’s transition.

Kushner’s case may be more problematic if a “quid pro quo” were offered in exchange for delaying Resolution 2334, for example, a cessation of sanctions against Russia in exchange for Russian cooperation on Israel. But so far there is no evidence of such a deal. In fact, it was reported that Netanyahu contacted Putin directly and successfully lobbied him to ask for postponement of the vote, a request the council rejected. So while Kushner and Flynn’s alleged lobbying efforts included Russia, it may not have been their focus.

Some claim that Kushner and Flynn violated the Logan Act, which prohibits citizens from contacting foreign governments to influence policy that affects U.S. policy. But we can learn from an episode in 2015 why this claim doesn’t hold water. Back then, John Boehner and 47 Republican senators wrote a letter to Iran and were similarly accused of violating the Logan Act. The Volokh Conspiracy blog tackled the question, and if their convincing analysis is applied to Kushner in this situation, the Logan Act will likely not be a successful litigation path.

For starters, Kushner was already acting in an official capacity, similar to earlier transitional governments that engaged foreign governments. Furthermore, Obama did not tip his hand as to how the United States would vote on 2334 until the final days, so Kushner could not be said to have been seeking to undermine U.S. policy, since it was not defined publicly. And finally, nobody has ever been convicted under the Logan Act, and criminal statutes that have not been enforced tend to lapse.

But in addition to the Logan Act never having been enforced, there are others reasons it would be terrible for Kushner to be brought down over this.

Resolution 2334 gave the Palestinians not only more leverage in any negotiations, but also moral authority. It put Israel in the position of acceding to Palestinian demands — removing hundreds of thousands of Israelis, dismantling tens of billions of shekels worth of construction and infrastructure, and leaving the Western Wall and the Jewish Quarter to a people who have denied that Jews have a connection to these places — or become guilty of “flagrant violations of international law.”

In other words, this resolution rolls back the clock a few decades and encapsulates the Arab positions regarding Israel, only without demanding peace in exchange, undermining and possibly even retroactively rewriting the 1967 UNSC Resolution 242, which was purposely structured, with extensive diplomatic leadership by the United States and Britain, to allow Israel to negotiate a peace that would not require it to give up all the land it conquered.

Weeks before leaving office, and with virtually no public debate, Obama was gunning for significant change that undermined 50 years of U.S. foreign policy. Worse, the status quo before Resolution 2334 consisted of policy structured with intentional ambiguity that Israel relied upon to retain the territory it controls until a peace deal would be struck, on the understanding that ultimately it would not give up all this land.

Resolution 2334 represents the kiss of death for any potential peace deal, insofar as it takes away any incentive the Palestinians might have had to come to the negotiating table.

Furthermore, Israelis remember well that when Jordan controlled the West Bank, Jews were not permitted to enter. They could not go to the Temple Mount or pray at the Western Wall. This is what 2334 deems to be the correct outcome of this conflict.

Israelis also know how their total evacuation of Gaza gained them no goodwill, garnered thousands of rocket attacks and three costly wars, and left an implacable enemy that openly seeks Israel’s destruction in charge.

And if it was indeed Jared Kushner who instructed Flynn to speak to the Security Council countries to get them to postpone or cancel the 2334 vote so that the new Trump administration could halt it, then he was pursuing a moral agenda that would help Israel’s security and the prospects for peace, and maintain long-standing U.S. foreign policy. The special prosecutor, Robert Mueller III, was assigned to identify criminal collusion between Russia and members of Trump’s campaign. It could well be that he may find criminal actions among members of the campaign, including Kushner and Trump. Certainly, it would seem that if Flynn was instructed to offer sanctions relief or recognition of Russia’s occupation of Crimea, then Mueller has his quid pro quo and perhaps could argue that a crime was committed.

However, this process began with claims of collusion between Russia and the Trump campaign to win the last U.S. presidential elections. Now the discussion has shifted to potential deal-making — or even diplomacy — of an incoming administration seeking to avoid a virtually irrevocable policy mistake that would harm a close ally while undermining the goals of several previous administrations to secure peace between Israel and the Palestinians.

Is this what should bring down Kushner? No. Absolutely not.

Daniel Kohn lives and writes in San Diego and tweets at @danielkohn99.