Jared Kushner Was Wrong To Undermine America — Even To Help Israel 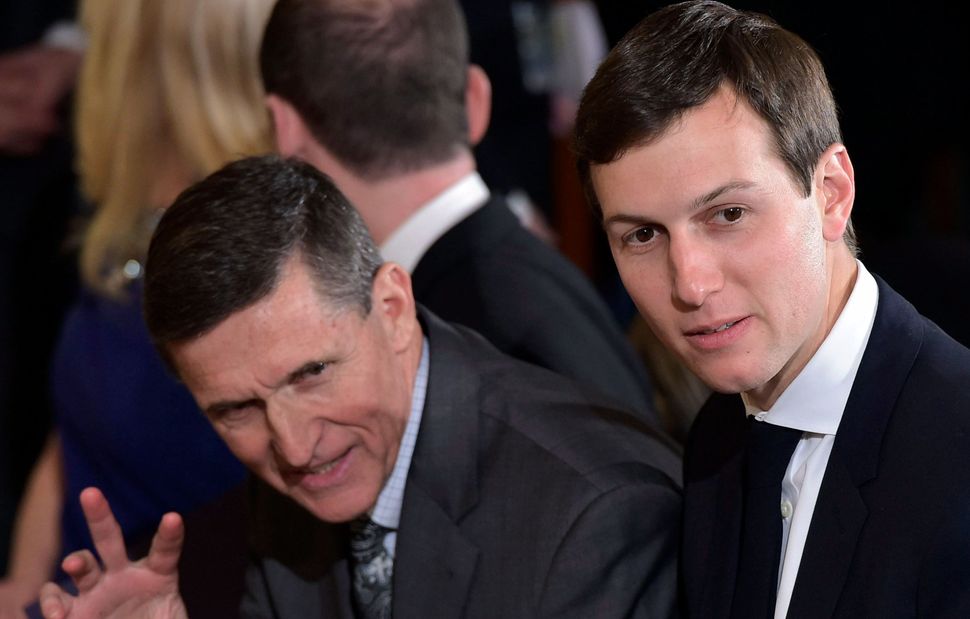 I am not certain which is more troubling: reading reports that Jared Kushner — before he became the most powerful Jew in the White House, when he was just the president-elect’s powerful son-in-law — secretly worked to persuade Russia to defy the Obama administration and stop a United Nations resolution condemning Israel for its settlement policy, or watching so many American Jews applaud him.

And yet there was Haim Saban, who lavishly supported Hillary Clinton, gushing over Kushner when he made a rare appearance at the Brookings Institution on Sunday.

Then, as our Nathan Guttman reported, a few members of the audience joined Saban in applauding.

Whether special counsel Robert Mueller does indeed find Kushner at fault will depend on whether there was evidence of collusion and a quid pro quo, and I would never venture a guess on where that investigation is heading. But Kushner could escape prosecution and his actions should still be considered wrong.

There can be only one president at a time. That’s why in the very early days of this republic, 1799 to be exact, a new federal law called the Logan Act made it a crime for an unauthorized person to negotiate with foreign governments having a dispute with the United States, or to “defeat the measures of the United States.”

I’m not a law professor, but Daniel Hemel and Eric Posner are (at the University of Chicago), and they note in Monday’s New York Times that the statue represents an important principle: “The president is — as the Supreme Court has said time and again — ‘the sole organ of the nation in its external relations.’ If private citizens could hold themselves out as representatives of the United States and work at cross-purposes with the president’s own diplomatic objectives, the president’s ability to conduct foreign relations would be severely hampered.”

This isn’t a nicety to be observed from time to time, but fundamental to the functioning of government and the respect for the rule of law.

The fact that Richard Nixon violated this principle in 1968 when running for president — using a back channel to scuttle peace talks that might have ended the Vietnam War and saved countless lives — hardly makes the case for Kushner. Nixon wasn’t caught, because he conducted himself in secret and lied about it for decades. The truth emerged only last year.

The fact that 48 Republican members of Congress in 2015 wrote a letter to Iran in direct contradiction to the White House and got away with it doesn’t make a case for Kushner, either. Not to excuse them, but they were public officials who took their actions publicly and could be held accountable by their constituents.

The Trump transition team sneaked around as private citizens, apparently with the goal of undermining the foreign policy of the existing president long before it was time for him to pack up and leave the White House.

Just as troubling as this blatant disrespect for American norms is the applause in that auditorium Sunday. American Jews have myriad public organizations whose sole purpose is to help shape administration policy with regard to Israel. The community is hardly voiceless or powerless, and the American public knows this.

A Brookings poll released last Friday found that 57% of the American public thinks that the Trump administration is leaning toward Israel with regard to the conflict with the Palestinians. Only 34% thought the administration was neutral.

But there’s a disturbing second part of that finding: Fifity-nine percent of the public wants the administration to be neutral. At some point, this divergence will become a political problem for the White House — and for American Jews.

And here’s the irony. For all the hue and cry over Resolution 2334, the dire warnings from Israeli Prime Minister Benjamin Netanyahu and the condemnation of Obama’s decision, there has been precious little consequence to the U.N. action. The United States hardly abandoned Israel — not with the largest military package in the history of the world signed before Obama left office.

Meantime, the settlement project continues apace. Netanyahu has ignored the resolution and continued to allow Jewish growth beyond the Green Line — including in Beit El

That’s the settlement that is a favorite of U.S. Ambassador David Friedman, once head of an organization that raises millions a year to educate Beit El youth.

It was also a favorite of the Charles and Seryl Kushner Foundation. Turns out that Jared Kushner was a co-director of the foundation for nearly a decade, but somehow he forgot to mention that role on his government financial disclosure forms. (Newsweek first published this news Sunday.)

The researchers who discovered the omission, Newsweek said, “suggested that Kushner’s failure may have been more than an inadvertent mistake, but instead an attempt to avoid ‘potential conflicts with his job negotiating Middle East peace.’”

Another reason to applaud? I don’t think so.

Jared Kushner Was Wrong To Undermine America — Even To Help Israel