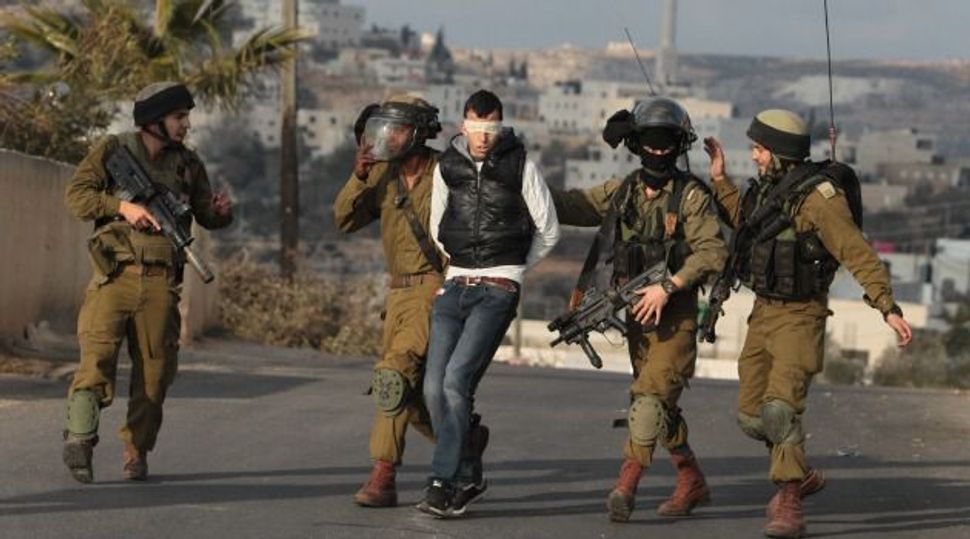 Spike in Killings: Amnesty International accuses Israel of allowing soldiers to kill Palestinians with impunity in the occupied West Bank. It warns that the killings could constitute ?war crimes.? Image by getty images

Over the past few weeks, a storm has raged through Israel. I am a member of Breaking the Silence, an organization of Israeli soldiers who testify about what they did in the occupied territories. Our organization is once again under attack in an attempt to undermine our credibility through smearing our name and paving the way for legislation that will close our doors.

This is not paranoia.

The country’s most senior politicians state this openly and without hesitation. Their goal is clear: perpetuation of the occupation as a matter of Israeli consensus that cannot be undermined. The means of achieving this goal involves conducting a campaign of persecution and delegitimization against us and other Israeli patriots working to end the occupation.

At the heart of this current wave is our organization’s spokesperson, Lieutenant Res. Dean Issacharoff. Dean publicly testified about the violent arrest of a Palestinian youth who threw stones, which he carried out as an IDF officer in Hebron in 2014.

Dean spoke of the incident as a routine matter. To our deep dismay, such acts inevitably occur daily throughout the occupied territories. There is no occupation without violence; there is no oppression of millions of subjects stripped of rights without abuse.

However, this time the Israeli right was quick to create a seemingly brilliant spin: various organizations filed a complaint against Dean with the police, demanding that they investigate and determine whether he was a violent felon or a liar, who incriminated himself to slander his country.

Justice Minister Ayelet Shaked, a member of the Jewish Home Party that represents settlers, took a deviant step in asking the attorney general to open an investigation. Shortly thereafter it was opened, and a mere months later it was closed.

In a bold, unprecedented letter, the State Attorney’s Office satisfied the appointed minister’s political goals. “The matters he [Dean] described did not occur at all,” they wrote.

Within hours, senior officials chimed in. Prime Minister Netanyahu wrote: “Breaking the Silence lies and badly slanders our soldiers before the world.” Yisrael Katz, one of Likud’s senior ministers, also rushed to reply: “Now is the time to firm-handedly deal with this organization, to outlaw it and prohibit its activity. That’s what I intend to do.”

They felt, for a moment, that they proved their point, hoping that their negligent failed investigation would achieve two goals: slandering the names of those who seek to expose the truth, while preventing a trial in which dozens of members of Breaking the Silence would testify in detail about the routine evils of occupation.

With five days of intensive work, we were able to prove that the investigation was conducted in a tendentiously faulty fashion. Key eyewitnesses were not questioned, and the Palestinian whom the police investigated as the victim of the transgression, was not the detainee beaten by Dean. The relevant detainee was arrested during another incident on another day.

The complete collapse of this miserable investigation, which will almost surely necessitate the reopening of the case, illustrates the degree to which the entire process serves the political interests of the governing echelon, whose true concern is ensuring ongoing silence.

As such, something else was revealed, no less shady than a violent arrest in an alley. What was revealed, and not for the first time, was the degree to which the occupation and its norms have corrupted Israeli society’s most central institutions.

How far is the most extreme government in the state’s history willing to leap toward an irreversible destination? Will it pass the moment in which the two-state solution will be deemed no longer implementable, and Israel’s control over the occupied territories will become permanent?

The government is leading us towards nothing less than the establishment of an apartheid regime. Such a reality will undermine the legitimacy of the very existence of the State of Israel, bringing about the end of the Zionist project in its entirety.

With Trump’s recent unilateral declaration deeming Jerusalem the capital of the State of Israel, and Knesset legislation to ban groups critical of the occupation underway, this reality is taking root.

We at Breaking the Silence are not willing to accept such a future for our country. Today we work to end the occupation, to prevent a bleak tomorrow. For Israel’s sake, its supporters should dare to join our effort in walking down a path that will ensure its future.

Yehuda Shaul served as an infantry combat soldier and commander in the IDF during the Second Intifada, and is a founding member of Breaking the Silence.