Seriously, 92Y – Ari Shavit Should Never Have Been Invited In The First Place 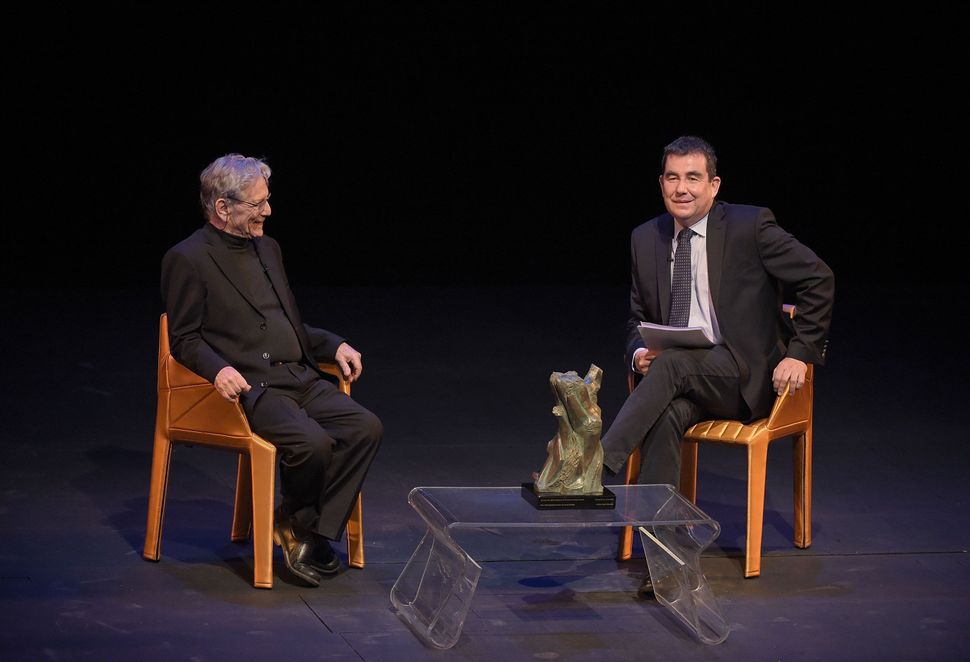 As the world continues to shake with revelations of sexual abuse in the most high-profile corridors of power and the #MeToo realization that it is nearly impossible to find a woman who has not been affected by sexual harassment, some members of Jewish communal leadership seem to be living in a cave.

I knew this was true. Still, it’s shocking to meet this reality head on. When I learned this week that the 92nd Street Y is advertising admitted sexual predator Ari Shavit as their keynote speaker to mark Israel’s 70th anniversary, it became unambiguously clear that the insulated, powerful, and tone-deaf Jewish boys’ club is still running the show, to the detriment of women and all victims of sexual assault.

Even though the event was later scrapped (after some agitated social media protest), the fact that this actually happened sends some extremely worrisome messages.

On the most basic level, the original decision to include Shavit ignores women as consumers. The idea that women and sexual assault victims would be horrified by this choice apparently did not occur to the organizers. That we would never come to an event like this doesn’t seem to matter. Whoever the victims of sexual abuse are – women and men alike – we are irrelevant. We are not even considered as potential attendees. It is a stunning dismissal of victims from the community.

It reminds me of how every time I click on a link on a browser that pops open a window for call girls, I face the reality not only of the commodification of women’s bodies but also of the default assumption that all consumers are at least perceived to be men. In fact, the dominant assumption in so many areas of business and communal life is not only that a typical consumer is male, but that he is a heterosexual male who has no problem with the sexual objectification of women.

It seems that these same dark forces controlling my internet browser are also making decisions at the 92Y. All they see is men, particularly ones who have no problem with sexual abuse.

On another level, this decision ignores women as professionals. I mean, the organization could not find one alternative to Shavit? There wasn’t a man or better yet a woman who has something interesting to say about Israeli society, who has written books about Israel?!

They could not find one woman who is worthy of the podium. That is absolutely pathetic. The managers here seem incapable of seeing women’s professional work, and do not realize that the best way to fight sexual abuse is to actually give women work.

The dominance of men as speakers, panelists and board members in the Jewish world – which has been documented over the past few years on the tumblr page 100 Percent Schmucks — sends the message that leading experts are men, that men’s work is valuable, and that women don’t have the stuff.

We are still living in the Jewish boys’ club.

It reminds me of the time years ago when a leadership training program I was participating in had zero women in their lecture pool. Not one. We women were also a minority of the attendees, but vocal enough to point this out. “There are no women of the caliber we are looking for,” was the reply from the head. So we put together a list of women. It took us an hour to make a list of 100 women with exceptional credentials who we would be interested in hearing from. Clearly these guys at 92Y haven’t gotten that memo.

On an even deeper level, this event is a graphic illustration of the intricacies of the Jewish boys’ club. A recent Forward survey shows that the top 27 highest paid executives are men, whereas women constitute a mere 17% of communal leaders. The gender wage gap stands at 60%. It is clear that men are making lots of decisions on behalf of the community that benefit men while ignoring women, women’s work, women’s needs, and the infuriating sexual abuse that women go through in our lives.

An article describing Shavit’s “comeback” reports that Shavit also has a new book coming out. Yes, in this world in which men’s books are published at three times the rate of women’s books, an admitted sex offender is still getting book deals while so many amazing women writers are not.

Apparently, it’s easier to get a book deal as a sexual predator than as a woman. Just think about that for a minute.

It is worth noting that Shavit’s so-called expertise on Israel was problematic even before he was outed as a sexual predator. In his research, he interviews almost no women, and those who he does bother to quote are described by their appearance and sexuality. Calling him an expert on Israel essentially says that women do not matter at members of Israeli society at all.

This event demonstrates the very real intersection of sexual abuse and the gender gap in Jewish power. What is happening in the Jewish world is not unlike the way Harvey Weinstein not only sexually abused women but also stood in their path on the way to try and develop careers.

When the Jewish community gives a sexual offender a podium, the spotlight, reverence, attention, money, book deals, and an entire organization’s resources, not only does this send the message that sexual abuse doesn’t matter. It also pushes aside, once again, women who are simply trying to live freely and do their work in the world.

With this event, Shavit and the Jewish men who enable him send the clear message that women don’t matter.

This article has been updated to reflect the apparent cancellation of Shavit’s invitation.

Seriously, 92Y – Ari Shavit Should Never Have Been Invited In The First Place