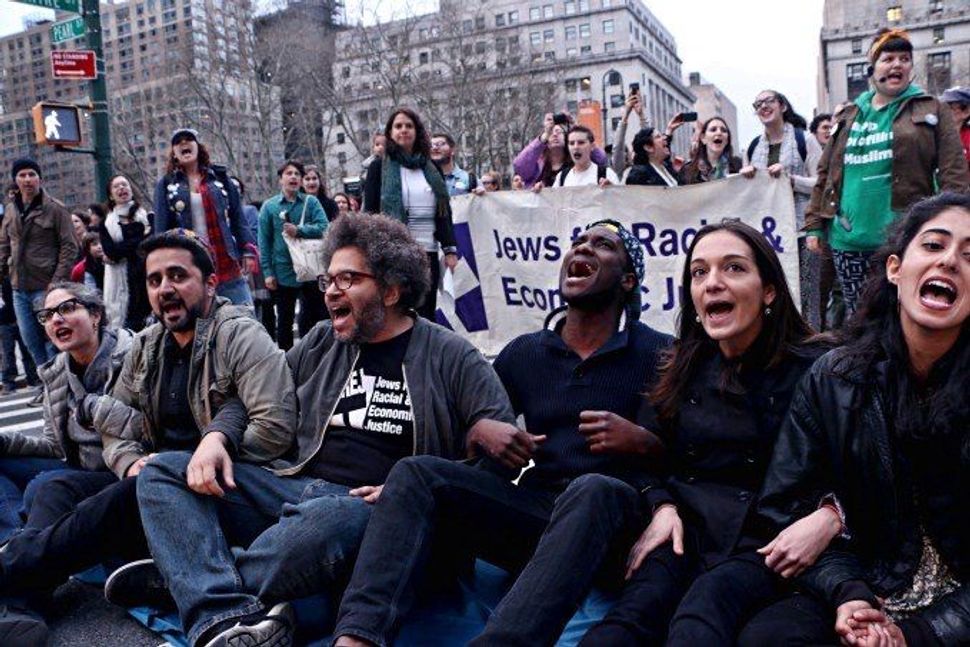 “I was just waiting for her to say she was Jewish.”

This was my colleague’s reaction to the white, female narrator of a very problematic video we were watching together. Despite the fact that we worked at a non-profit that had integrated an anti-oppressive analysis in their values and internal systems, my colleague, who was on the management team, associated all the negativity in the video with Judaism, instead of understanding the white supremacy that was playing out in the narrator’s brand of feminism.

A week later I got the courage to approach my colleague about the comments she had made about the video. I explained that what she said was hurtful. Though my colleague apologized, she continued to tell me that she had based her judgement on personal experiences she’s had. In essence, she was generalizing about all Jews based on the few Jews that she had met. I was speechless and dropped the subject with her. This is just one of many experiences I’ve had with anti-Semitism while doing social justice work in New York City over the past decade, and it’s part of what drove me to contribute to a new guide that I hope will help to address situations exactly like this one.

Jews For Racial & Economic Justice (JFREJ) recently released Understanding Antisemitism, a resource which explains who Jews are, how anti-Semitism works, and how it interacts with other forms of oppression, such as racism and capitalism. It provides a nuanced explanation of why it is important for the left to have a strong analysis of anti-Semitism so we can all get free. While the true locus of anti-Semitism is the political right, especially the Christian, white nationalist right, we need to be able to address the ignorance and confusion of the left as well. Having Understanding Antisemitism out in the world feels like maybe, just maybe, what I have been trying to explain to my non-Jewish colleagues, friends and comrades in left organizations for many years will finally be seen and I will no longer be dismissed, demonized and reprimanded for speaking up.

It wasn’t until I started organizing with JFREJ three years ago that I began to have language for, and fully understand the experiences of interpersonal and institutional anti-Semitism I had experienced and all the negative messages and shame I had internalized about being Jewish. Especially in the New York social justice organizations where I am active, I became accustomed to participants in power, privilege and oppression exercises saying that Jews were a privileged religious group and controlled New York City and the United States. I also got used to most facilitators agreeing with what participants said and reinforcing harmful stereotypes about Jews. When I began pushing back on the anti-Semitism that I was experiencing, I was met with resistance.

For example, two summers ago, three coworkers and I attended a week-long retreat space to work on a project. We were there with other amazing organizers and advocates. During an activity we were all participating in, I identified as an Arab Jew, explained my family’s background, the history of the term Mizrahi (Jews indigenous to the Middle East, North Africa, Central Asia and the Balkans) and how powerful it has been for me to organize around this identify with other members of JFREJ’s Mizrahi caucus. The next morning at breakfast, two non-Jewish women started questioning me about my identity. They said that they had never heard someone identify as an Arab Jew and asked me if it was just a political identity. I personally think all identities are political, but what they were saying to me was ‘it can’t factually be true; you’re a fraud.’ Their questions, and their ignorance, erased my very real identity. I tried to explain to them how anti-Semitism works, provide them with concrete examples and explain that not all Jews are white and from Europe. But the conversation ended with them saying all the Jews they know are white and wealthy, discounting what I shared. Instead of being in a moment of learning and shifting together, I was again silenced.

As a Mizrahi Jew, I experience anti-Semitism and invisibility within and outside of the Jewish community in particular ways. I think a lot about the impact colonialism has had on my Syrian family. The negative things we’ve come to think about ourselves, the deeply ingrained idea that Europeanness is superior, civilized and what we should aspire to. I think about how my middle name is French — Renèe — named after my great aunt. My family never lived in France, but they started giving us French names once the French colonized Syria, instead of Arabic and Hebrew names like Bahia, Gabra, and Moshe, which they had used for centuries. I also think about how a specific form of anti-Semitism, largely created by European Christians, was imported to the Middle East through colonialism. We must focus on the role European Christians played in creating a rift between Jews and Muslims and challenge the dichotomy that splits our communities. We must shift our focus to dismantling Christian hegemony and understanding the impact it has had on Jews, Muslims and all people of color. We must also acknowledge the existence and experiences of Jews from the Middle East and North Africa, other Jews of Color, and Jews from all parts of the world, and the importance of having our unique voices centered in racial justice movements. Understanding Antisemitism may be the first resource that attempts to tackle all of these nuances, histories and identities. Even in 44 pages, it can’t capture all of the complexity of my Mizrahi experience, but it’s a great start.

I am convinced that we need to work to dismantle all forms of oppression — racism, Islamophobia, transphobia and so many others — for us to achieve collective liberation and an end to bigotry for all people. Fighting anti-Semitism must be part of this work. In fact, a key finding of our research into anti-Semitism is that it has historically worked to divide and suppress revolutionary movements and to prevent people who experience oppression from holding their true oppressors accountable. As an organizer, I deeply believe that we need to get to the root cause of a problem to be able to eradicate it. If we continue to blame Jews for the world’s problems, as my colleagues did — we will not effectively target racism and capitalism and other actual root causes of injustice. This is one important reason for non-Jews who care about social justice to take the time to learn about anti-Semitism. But I believe there is an even simpler one — the same reason we work towards eradicating all forms of oppression: anti-Semitism is wrong and is hurting Jews.