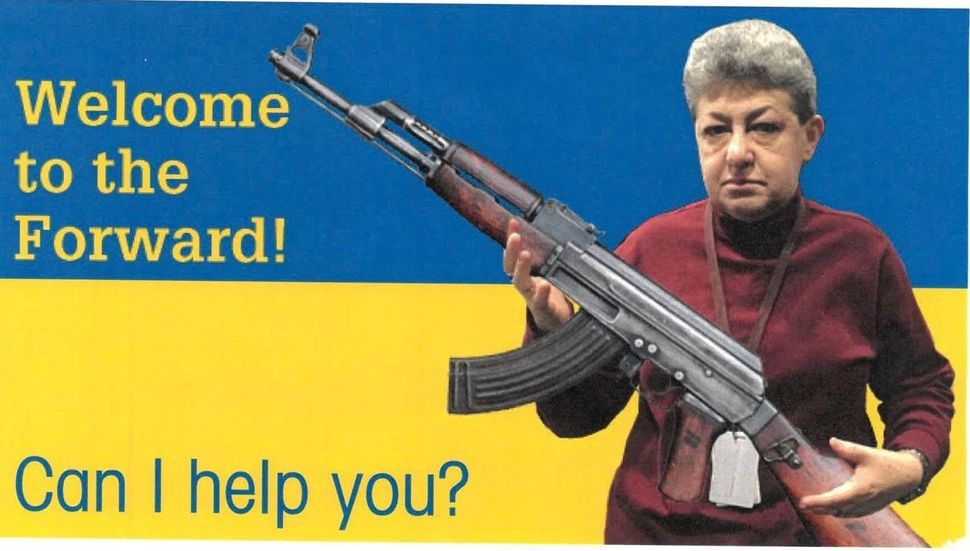 The Forward’s receptionist, Marina Vinokur, always has a story for me. A 19-year veteran of the Forward, Marina’s stories — which span the Forward’s transition from Yiddish and Russian to English, from print to digital — tend to reveal the underbelly of this hallowed institution.

“When we switched from newspaper to magazine, a cranky old man called the [Forward] office saying he wanted to cancel his subscription,” she told me as I entered the office one morning. “I asked why. He said, ‘Because my parakeet likes to poop on the newspaper.’ So I said, ‘Why not wait and see if the parakeet will enjoy pooping on the magazine?’” Like most of Marina’s suggestions, it hit the spot. The cranky old man kept his subscription.

For nearly 20 years, Marina has been the Forward’s intermediary between its readers and staff, a job that fits her personality well. Her phlegmatic Russian accent keeps any caller honest, but she is kind and patient in a way that always leaves readers — and their parakeets — satisfied.

In both a figurative and literal sense, Marina operates the doorway into the journalistic pulse of the Jewish American community. There’s some irony in that. Although she’s a citizen, Marina doesn’t really consider herself American. Born shortly before Stalin’s death, she spent the first 40 years of her life in Kiev, Ukraine.

Growing up in Ukraine, she lived in a one-room apartment with her grandparents, parents, sister, aunt and a Jewish lady who came from the same shtetl and had nowhere to go during World War II.

Though not strictly religious, her family practiced Jewish traditions in secret. “It was practically illegal to bake matzo, but my grandmother didn’t care,” Marina said.

When her parents got married, only 10 people were present, and her mother had a chuppah she didn’t even tell close relatives about.

“The anti-Semitism was awful,” Maria remembered. “Everywhere in the Ukraine.”

Two cousins were raised by Marina’s grandmother after their parents were killed in pogroms. For years, her grandmother avoided telling them they were Jewish — and they did the same with their children, too. “The fear stayed with them forever,” Marina explained.

Often a more pressing concern was grappling with the general repression of the Soviet regime. Her aunt’s husband was arrested in 1937 and vanished. Several other relatives were arrested in 1952, and after their release following Stalin’s demise, they died several months later due to the torture they had endured. As an adult, Marina worked for over 20 years as a librarian in Kiev. But even before that, Marina had cultivated another of her signature traits — a deep-seated skepticism, and an ironic sense of humor.

“In the Soviet Union, I didn’t believe anyone anymore,” Marina said.

In 1992, shortly after the fall of the Soviet Union, Marina, her husband and her daughter left Ukraine for America. With this came the challenge of reestablishing their place in the world, and a new identity. Marina joined the Russian Forward, working with readers on subscriptions. She transitioned to the Yiddish Forward when the Russian Forward closed, and she later became the Forward’s general receptionist.

A speaker of Ukrainian, Russian, Yiddish and Polish, Marina has been the point of contact for many of the Forward’s older readers who don’t speak English. “They became like friends, even though most of them I’ve never seen,” she said.

Marina would talk to them in Russian or, more often, in Yiddish.

“Yiddish means a lot to me,” she said. “I grew up in Yiddish. I was born in it.” After speaking to Marina in Yiddish, readers would send her letters -– but she couldn’t read them; she never learned the alphabet.

But as the years went by, more and more of these Yiddish-speaking “friends” have died. “This world is gone — these people don’t exist anymore,” Marina declared. “No one can stop it. It is life. People sometimes ask me, ‘Do you speak Yiddish at home?’ I say no. There’s no one to speak Yiddish to.”

Still, she remains ever optimistic that the Yiddish language and culture will live on, as it is in the growing presence of the Yiddish Forward online. “There will never be no Jewish community,” Marina said. “I believe it. If Hitler didn’t succeed, no one can.”

In her position at the Forward, she’s done much to keep the knowledge and spirit of Yiddish culture alive among the Forward’s general staff. Dan Friedman, the Forward’s executive editor, mentioned his favorite Marina line from the Soviet Union. An all purpose line for explaining why someone has a good reason to loiter, it translates as, “I’m not that kind of lady — I’m just waiting for a tramway.” (It rhymes in Russian!)

And she never minds sharing her Yiddish Soviet perspective with colleagues. Marina on gun control: “Believe me — if I had a gun, I would use it a lot. So it’s better that I don’t have a gun.” Marina on sick co-workers: “People are disappearing like it’s 1930s Russia.” Marina on comparing Americans to Soviets: “People are the same everywhere. Crazy cat people — you find them anywhere you go.”

Sadly, Marina’s 19-year tenure at the Forward is coming to a close. She will be retiring at the end of the month.

Things will not be the same around the Forward office without Marina, no matter what she says. “I’m absolutely nobody — I’m a door operator,” she said. “That’s who I am. I don’t make any decisions, and I like it like that.”

But she’s been much more than that. With her stoicism and wit, Marina was more like the valve operating the beating heart of the Forward, and she will take a piece of us with her when she goes.

Some languages and translations were updated on December 23, 2017.