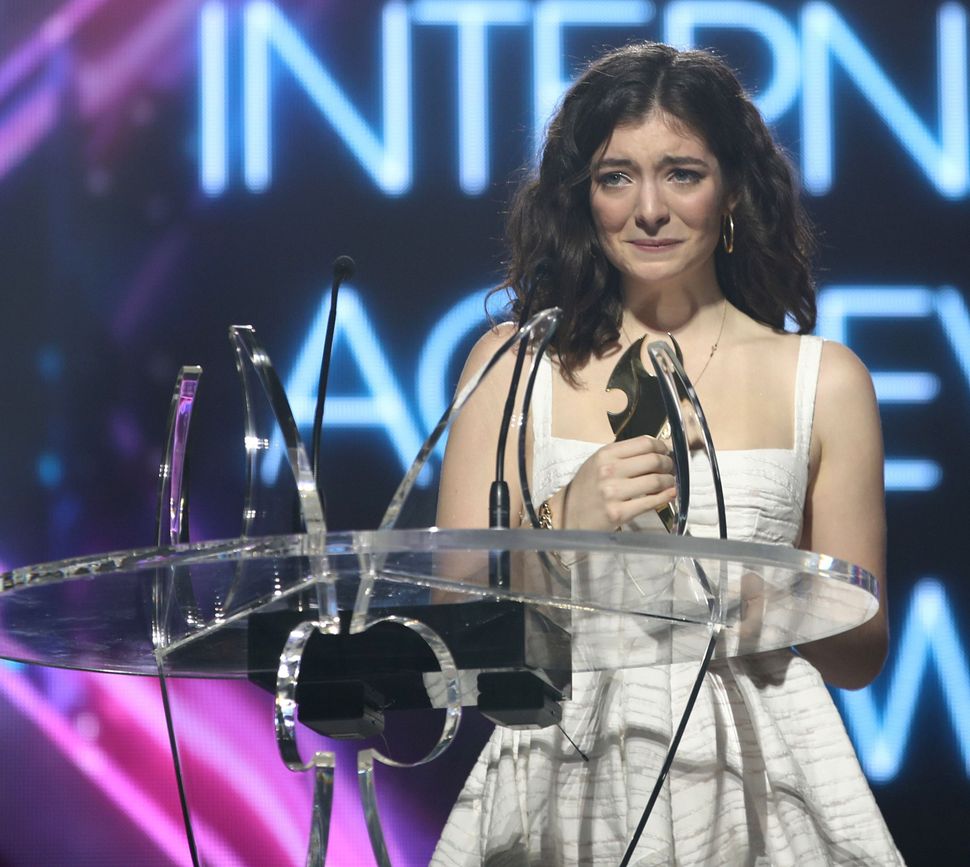 Lorde began racking up praise and awards for her debut album, Pure Heroine, before she’d even hit her 18th birthday. Listening to her poetic yet sharp-tongued lyrics, combined with her soulful voice, one reflexively assumed she had spent decades meticulously reflecting on her own passing youth; in fact, she was barely old enough to buy a pack of cigarettes. No wonder she was regularly described as offering “age-defying wisdom” in her songs and seeming “wise beyond her years.”

But when the now 21-year-old New Zealand singer announced last weekend that she was canceling her concert in Tel Aviv, she seemed no different from a run-of-the-mill university student buying into the simplistic, unfounded narratives around Israel, ones that are so often embraced in an attempt to seem “woke.”

Lorde reneged on her scheduled June performance in Tel Aviv after receiving a smattering of social media pressure provoked by a public letter written by New Zealanders Nadia Abu-Shanab and Justine Sachs. The letter is steeped in unsupported clichés of Israel as an oppressor, colonizer, and land stealer, without any links to articles or experts to support their numbers or claims. (In a related side note, Sachs co-founded Dayenu: New Zealand Jews Against Occupation, which vocally supported the Chicago Dyke March’s decision earlier this year to forcibly expel Jewish women carrying flags with Stars of David.)

But rather than an aberration, the letter is part and parcel of what we’ve come to expect from the Boycott, Divestment, and Sanction (BDS) movement. The movement is focused on dismantling Israel with little to no ink spilled on ways to create a viable state to advance the Palestinian people or combat poverty or abuse -— especially towards women, with the persistence of “honor killings” -— within Gaza and the West Bank. The BDS movement has yet to officially acknowledge any Jewish right to self-determination. The official BDS website makes no mention of support for a two-state solution. Instead, it refers to Israel’s “violent establishment” in 1948 and makes no mention of what would happen to the country or the Jewish people if all its demands were to be met.

And yet, Lorde, a woman praised for her creativity and independence, fell for BDS -— and rather fast. For an artist who has found success in criticizing the superficiality of her peers in songs like “Royals,” it was galling how light on substance her cancellation statement was. Alluding to having done “a lot of reading and sought a lot of opinions” without any specifics about where she was actually getting information, Lorde said “i’m not too proud to admit i didn’t make the right call” on scheduling a concert in Tel Aviv.” She ended her cancellation statement with a frustratingly phony, cotton-candy-sweet sentiment that sounded eerily like a Miss USA contestant stumbling through a question about world peace: “i hope one day we can all dance.”

The irony, of course, is that if Lorde actually wanted us to “all dance,” she could easily make that happen by performing, using music — her music — as a bridge to bring people together. Artists have great power to transcend barriers, to push people out of their comfort zones, and to challenge and provoke through their work and their performances. But the BDS movement to which Lorde has bowed stands against that rich history.

For Lorde in particular there’s an extra thick layer of hypocrisy over her decision to cancel on Israel: she is still scheduled to perform in Russia —- not once but twice. Thus far, Lorde has shown absolutely zero qualms about performing in Russia, a country known for terrible and anti-democratic measures.

Unlike her decision to boycott Israel, Lorde is not boycotting Russia, meaning Lorde apparently feels she made “the right call” on her decision to perform in a country where journalists and politicians are jailed or suffer “mysterious” deaths for uttering any criticism of Russian premiere Vladimir Putin. While Lorde cowered to pressures from BDS supporters who claim to care about Palestinian sovereignty (though, notably, the BDS movement has not officially supported a two-state solution), she seems to care little about Ukraine’s sovereignty, and is happily planning to sing and dance for a country that defied all notions of respect for a neighboring people by annexing a huge chunk of their land.

Some have pointed to President Trump’s recent decision to move the United States embassy to Jerusalem as fodder for Lorde’s cancellation, since the letter calling on her decision to cancel her performance briefly cited it. Aside from the fact that the BDS movement has been threatening artists for over a decade, well before Trump recognized Jerusalem as Israel’s capital, one would think BDS proponents would actually hold Russia’s feet to the fire a bit more, considering the evidence that suggests Russia took some pains to give Trump an edge in the election (which, of course, Russia has consistently denied).

The piece de resistance in Lorde’s double standard for selecting which countries are and aren’t worthy of her performances is that she has yet to give public pause about performing in a country teeming with anti-LGBTQ hate crimes. She has yet to voice any discomfort about making oodles of money from a country where the government actively punishes citizens found to be promoting “homosexual behavior among minors” -— aka offering any sort of support for LGBTQ youth. For a woman who has so commendably lent her fame to raise money and attention for LGBTQ causes around the globe, Lorde’s silence on Russia speaks volumes to how either hypocritical or ill-informed (or both) she is.

But Lorde’s willingness to perform in Russia speaks to the hypocrisy at the core of the BDS movement. The original letter calling on Lorde to cancel her concert in Israel cited her work as an “empathetic artist who is committed to the empowerment of women, the LGBTIQ community and people of colour [sic].” What makes the BDS movement so hard to take seriously is that their supporters claim they are acting in the name of empowering LGBTQ people, women, people of color -— and yet, unless there is some faint, tangential tie to Israel, they do not care about these communities or their suffering anywhere else in the world.

BDS is about putting up walls, fencing off artists, and shaming and berating people until they refuse to engage with Israel, its art, or its citizens at all. Furthermore, BDS penalizes artists, performers, and scholars who are Israeli by pressuring countries and institutions throughout the world to refuse to host them or discuss their work. Make no mistake: BDS at its foundation is discrimination based on birth, a combination of xenophobia and cultural totalitarianism.

And yet, Lorde, a woman who seemed implausibly musically mature beyond her scant two decades, has caved. Where even Justin Bieber had enough sense not to bow, Lorde crumbled.

Lorde’s singular decision to cancel her concert in Israel suggests she is holding the one Jewish country to a different standard than the rest of the world, or that she caved to the slightest tap of social media pressure without actually doing any independent research.

Neither one is a good look for a woman who is trying to fashion herself as an artist of substance and separate herself from a pack of cookie-cutter pop stars.

Emily Shire is a journalist covering feminism, politics and religion. Her work has appeared in The New York Times, The Daily Beast, WashingtonPost.com, Slate, Salon and other publications.