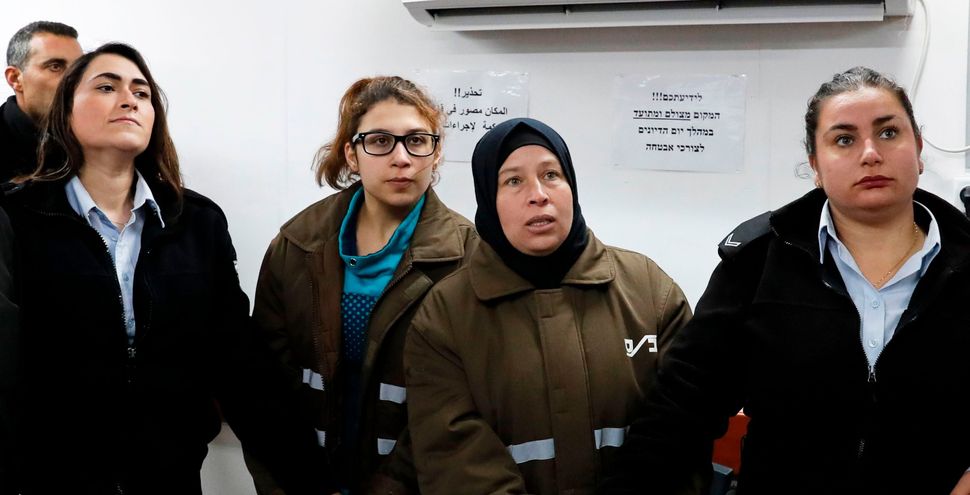 Israeli authorities rang in the New Year by turning to a tool of repression fit for the social media age: locking up Palestinians for Facebook posts.

The Israeli military’s case against Tamimi stems from a now-famous December 2017 incident in which her daughter, Ahed, slapped an Israeli soldier who had posted up on her family’s property.

Tamimi had filmed the confrontation and streamed it live on Facebook. That video, in turn, was broadcast by Israeli news outlets. The outlets then fueled calls in Israeli officialdom for the immediate arrest of Ahed, which took place during a night raid at the Tamimi home in mid-December.

In indicting Tamimi for, among other charges, posting the video on Facebook, the Israeli military showcased to the world how central social media-based prosecutions have become to the daily workings of occupation. Israel’s armed forces, from the Shin Bet to the police to the army, now spend hours and hours of manpower using sophisticated technology to scour Facebook for Palestinian messages deemed incitement. And Israeli prosecutors are increasingly using social media posts against Israel’s rule over Palestinians as a basis for jail sentences — in effect, locking up Palestinians for decrying their own oppression.

The prosecution of Tamimi is somewhat unique in that the Israeli army didn’t have to dig around for the video that ultimately resulted in her arrest and indictment. By the time she was arrested, which occurred after she inquired about her already detained daughter at an Israeli police station, the video had become front-page news in Israel. No digital surveillance was needed.

But other aspects of the indictment of Tamimi are familiar to close observers of how Israel treats Palestinian Facebook posts.

The Israeli military prosecution says that Tamimi’s broadcast constitutes incitement because it reaches thousands of people. The other charges in the indictment lodged against Tamimi — that she praised Palestinian attacks on Israeli forces in her Facebook posts — also point to her posts’ reach: nearly 5,000 people on Facebook.

In the eyes of the Israeli military, how popular a Palestinian is on Facebook has become a cause for concern. And if a Palestinian crosses the Israeli authorities’ incitement line — a line that bears no relation to democratic standards on free speech — their popularity becomes part of the reason for locking them up. This citation of Facebook stats — the number of likes your posts receive, or how many people you reach — is a by-now commonplace part of Israeli indictments of Palestinians.

The first known detention of a Palestinian for a social media post occurred in 2013, when Israeli police took Razi Nabulsi, a Palestinian citizen of Israel, in for questioning because he wrote statuses such as, “One day the nightmare will end.”

But the number of arrests, and convictions, for social media postings has increased dramatically, especially since October 2015, the start of a spate of Palestinian stabbing attacks. Israeli officials have partly blamed Facebook for these attacks because of posts they deem incitement to violence. (Since Israel’s public campaign against Facebook, the social media giant has ramped up its cooperation with Israeli authorities by taking down Palestinian posts and even suspending whole accounts.) Israel has arrested at least 400 Palestinians for Facebook posts, a number that will only grow in the coming years.

Some of those arrested have posted clear calls for violence. But other Facebook posts have been far more ambiguous.

Israeli security forces have arrested Palestinians for posting things like “Long live the intifada” — a word that conjures images of violence for Israelis but is a call for resistance, unarmed or otherwise, among Palestinians — and “Forgive me.” Israeli police interpreted the “forgive me” post, by a 15-year-old Palestinian girl, as a precursor to violence.

In 2014, Israeli police interrogated a Palestinian for writing on Facebook that the Jerusalem mayor is the “mayor of the occupation.” And last year, the police arrested a Palestinian because a Facebook post of his that read “good morning” was mistranslated by Facebook’s language software as “attack them.”

All this adds up to a disturbing picture. No Palestinian who uses Facebook, a key means of communication for Palestinians, is safe from the long arm of Israel’s digital surveillance state, no matter how innocuous their post is. And if you do dare to write political posts decrying the situation you live under — against Jewish-only settlements, settler roads, the arrest of children and the killing of your countrymen — then the chances of being arrested for that speech increase exponentially.

Nariman Tamimi has become the latest Palestinian to come under the probing eyes of Israel’s Facebook police, proving once again that under Israeli rule, Palestinians have no free speech, especially in the digital world.

Facebook executives have said they want the world to be more connected, and for the social network to be a force for democracy. But when it comes to Israel’s rule over Palestinians, Facebook looks more like a dark force: a network perfect for surveillance and the targeting of a captive population.

Alex Kane, a former editor at Mondoweiss and AlterNet, is a New York-based freelance journalist whose work has appeared in Haaretz, the Los Angeles Review of Books, The Intercept, VICE, Al Jazeera America and more. Follow him on Twitter, @alexbkane