Why Is No One Talking About Ahed Tamimi’s Call For Stabbings? 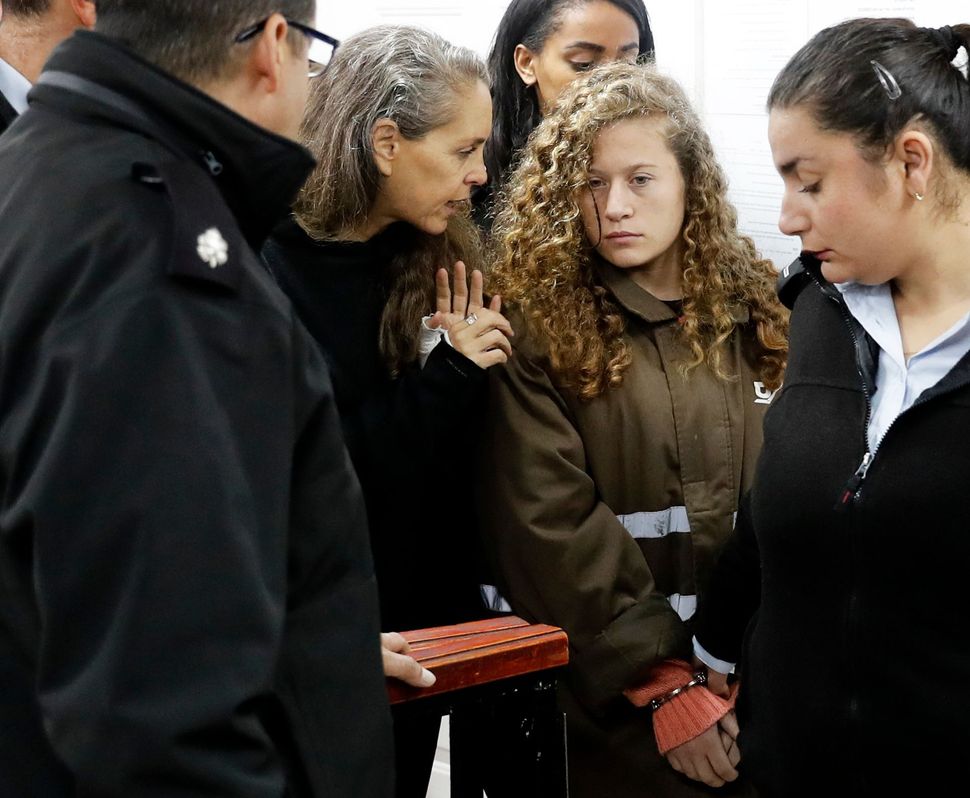 The sight of a young, unarmed woman standing up to heavily armed soldiers will always be a powerful one. This was certainly the case with a recent video seen around the world — that of Ahed Tamimi, the teenaged Palestinian girl who stood against the mighty IDF and was subsequently arrested.

Who could resist the stark, moving image of a young girl battling powerful soldiers with just her tiny fists, a perfect David vs. Goliath? After all, they are soldiers and she is just a girl.

Ahed is now 16 years and 11 months old, according to the Israel Prison Service. But she is also a trained provocateur from a family and village heavily involved in staged events against Israeli soldiers.

She was given an award by Turkey for a photo, which is clearly being staged, in which she raised a fist to IDF soldiers. Then there was the episode where she bit a soldier who was trying to arrest her brother for throwing rocks.

This latest video from two weeks ago, like the others, has a staged quality. It seems clear that Ahed’s blows are designed to provoke an awful – and filmed – response, a response the soldiers admirably withhold. And yet despite the clearly staged nature of the event and despite its violent nature, Ahed is being lauded as a hero, the new face of Palestinian resistance.

It’s disturbing, and not only because Ahed used violence to make her point. It’s disturbing because Ahed’s violence didn’t stop with her assault on the soldiers. After the scuffle, which Ahed’s mother Nariman was filming on Facebook Live, Ahed addressed her viewers:

“I hope that everyone will take part in the demonstrations as this is the only means to achieve the result. Our strength is in our stones, and I hope that the world will unite to liberate Palestine, because [Donald] Trump made his declaration and [the Americans] need to take responsibility for any response that comes from us. Whether it is stabbings or martyrdom operations or throwing stones, everyone must do his part and we must unite in order for our message to be heard that we want to liberate Palestine.”

These are hardly words of nonviolence. Ahed is clearly calling for violence against Jews. Given that Ahed’s aunt, who is close to her family, was an accomplice in the Sbarro bombing of 2001, Ahed knows that calls to kill lead to actual killing.

And yet hardly any of the news outlets reporting on her indictment mention this.

Let that sit for a minute. Mainstream media outlets like Reuters and CBS went to the trouble to report on the indictment while omitting the most heinous charge against Ahed – that she called for a violent uprising against Jews.

And it’s the media that I find most blameworthy – perhaps even more blameworthy than Ahed herself. For this young woman has known no other reality than as a figurehead of resistance. She perhaps has an excuse for seeing the conflict from only one side. After all, those dearest to her have fed her a steady diet of hate and lies (including anti-Semitic blood libels), and manipulated her since childhood. She is a product of what they have made her, the poster child for the resistance.

But what excuse does the media have to report on her arrest, but not on her actions and call for murder?

I wish that this little erasure of Ahed’s call to violence were a one off, an aberration. But it is the rule.

Anyone who’s engaged folks they disagree with on questions pertaining to Israel/Palestine has had frustrating experiences that result from this kind of dishonesty. In recent conversations I had with people on Twitter over pop star Lorde’s decision to pull out of a Tel Aviv concert due to pressure from the boycott movement, and the controversy over Rachel Ray calling hummus “Israeli” fare, the sheer ignorance of historical facts surrounding the issues was astounding.

I was looking to engage in respectful dialogue. I wanted to speak with people who were convinced that Israel was committing genocide and ethnic cleansing. I wanted to hear what they believed, and tell them what I saw in hopes of a bit more nuanced understanding.

In response to statements such as, “Well if you were occupied and your people being slaughtered, what would you do?” or “Israel jails children and is an apartheid state” or ”Gaza is an open air prison,” I asked my interlocutors if they knew why Israel was in the West Bank to begin with, or how the Gaza blockade came to be, or why and when the separation wall was built.

These questions are fundamental to understanding the reality in which we find ourselves. Yet none of them could answer these questions. They had no sense of history or events. They threw out great one-liners about baby killing and ethnic cleansing, but could not answer any factual questions about the conflict between Palestinians and Israelis.

How is it that otherwise intelligent people are willing to argue – emphatically — on a subject about which they are utterly ignorant? How are they so sure that they are right?

It is because the propaganda they are fed regularly is not balanced by accurate reporting with full context and details.

So when Ahed is shown, curly blond locks flowing, in handcuffs, but her video calling on people to murder Jews is not, of course there is only one “right” and one “wrong,” an easy answer for those who don’t want to think too hard.

But it is the media’s responsibility to present a full frame and a full context when reporting on these crucial issues. Media shapes public opinion and public opinion often shapes policy. A one sided and inaccurate portrayal of the conflict increases hostility towards Israel and Israelis as can be seen in England, Paris, and across US campuses. The BDS movement and its Apartheid Week feeds and grows from lies repeated or uncountered in the media. Not only does this lead to cancelled Israeli speeches and the acceptance of anti Israel and anti Semitic tropes, but it decreases the chances for real peace as it causes Israelis to shrug over the public opinion that is always against us anyway.

And finally, buying into the victimhood narrative simply encourages more victimhood. For the Palestinian Authority, victimhood is a profitable business.

Unbalanced, incomplete reporting slanted against Israel helps no one but those who profit from the conflict. We all deserve better.

Why Is No One Talking About Ahed Tamimi’s Call For Stabbings?