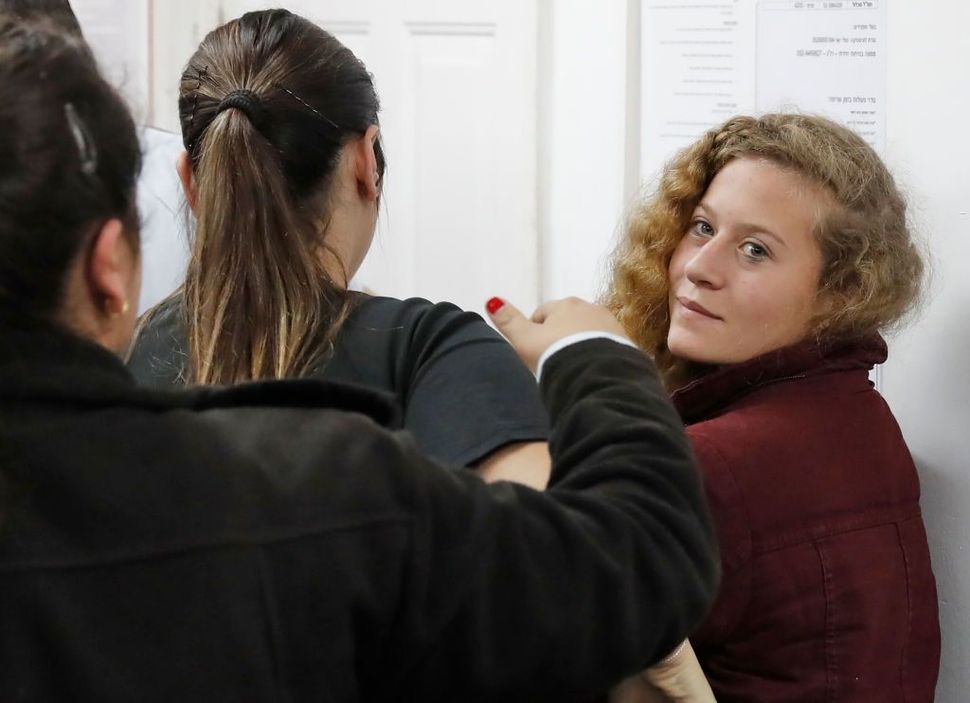 The video is striking — no pun intended. A 16 year-old Palestinian girl in the West Bank village of Nabi Saleh grapples with Israeli soldiers in full combat gear and armed to the teeth. Despite the fact that she swats and kicks at them, the soldiers, likely hardly older than their tormentor, show admirable restraint, doing nothing to escalate the situation from a scuffle into something much worse. Days later, more video emerged, this time of the IDF raiding Nabi Saleh in the middle of the night to pull this same teenager, Ahed Tamimi, from her bed and arrest her. Since then, her mother and a female cousin have also been arrested.

In Israel, and among defenders of Israel, two questions dominate the debate: How could any Palestinian have been permitted to abuse and humiliate the IDF in this manner? And what can Israel do to ensure that it doesn’t happen again?

Israel’s Minister of Education, Naftali Bennett and Defense Minister Avigdor Leiberman, both of whom support pardoning an Israeli soldier who was caught on video killing a Palestinian who no longer posed any threat, have ideas. Bennett called for Ahed and those who joined her in the attack to be jailed for the rest of their lives. Leiberman threatened ominously: “Everyone involved, not only the girl but also her parents and those around them, will not escape from what they deserve.” Knesset member Oren Hazan, from the Likud party, suggested that the soldiers’ failure to react with force was a mistake: “Restraint is a failed and dangerous policy. Next time it must end differently.” Knesset member Bezalel Smotrich, of the Jewish Home party, called on the IDF Chief of Staff “to order that every encounter or friction between the enemy and our troops end with a painful and decisive outcome.”

All of these reactions gloss over the key question: How did Israeli soldiers come to be grappling with this Palestinian teenager in the first place? Were they minding their own business, taking care of the security of Israel or Israelis, when Ahed and her relatives suddenly turned up to “provoke” them? Or rather, since the action in the video takes place in the front yard of Ahed’s house, were the soldiers in Nabi Saleh at the Tamimi residence to arrest someone, hunt for weapons or foil a planned attack against Israel?

The answer to all of these questions is: no. The reason IDF soldiers are regularly in Nabi Saleh, and regularly haunt the Tamimi family — week after week, for nearly the past decade — has nothing to do with the security of Israel. It is because the inhabitants of this village, in existence since long before the establishment of the modern state of Israel, refuse to submit quietly to the Occupation. They refuse to cease protesting against an authority that over time has taken their lands and resources for the benefit of settlements, and has seen soldiers, year after year, arrest, injure and kill village residents and especially Tamimi family members as they engage in unarmed protest.

To be clear: this isn’t just about Nabi Saleh. What is happening in this one village encapsulates the ineluctable and self-defeating logic of Israeli occupation. According to this logic, all Palestinian protest, including unarmed protest, is intolerable, undermining the IDF’s absolute authority and its deterrence. Consistent with this logic, quashing Palestinian protest is a top priority of the IDF, not because such protest threatens Israel’s security, but because occupation requires that the Palestinians never forget who is in charge. In support of this logic, Israel maintains laws in the West Bank that render virtually all Palestinian protest illegal and permit Israel to impose heavy penalties on those who refuse to submit. And as a consequence of this logic, unarmed or non-violent protest — including by young Palestinians like Ahed Tamimi — represents in many ways an even greater challenge to the IDF than armed attacks; as one senior Israeli defense official admitted, “We don’t do Gandhi very well.”

If Israel continues to seek military solutions to quash Palestinian resistance to the occupation, the results will be predictable and tragic. While Israeli leaders worry about the political costs of videos showing soldiers abusing, or being abused by, Palestinian children, Israelis as a whole will continue to pay the ever-growing costs — moral, financial, social, security, and diplomatic — imposed on them by governments that prioritize occupation over virtually all else and undermine the humanity of the nation’s own sons and daughters by sending them on missions the sole purpose of which is to humiliate, subjugate, and break the spirit of fellow human beings.

And as the costs to Palestinians continue to be measured in blood — deaths and injuries — and time lost in Israeli jail, Palestinian grievances will only deepen, and the determination to resist will only grow stronger. In short, Nabi Saleh and villages like it are where Israel’s occupation logic hits a wall (no pun intended): there is no military answer to Ahed Tamimi or others of her generation, who see that they have no hope and no future under Israeli rule. The only solution is an end to occupation.

Lara Friedman is the President of the Foundation for Middle East Peace (www.fmep.org).