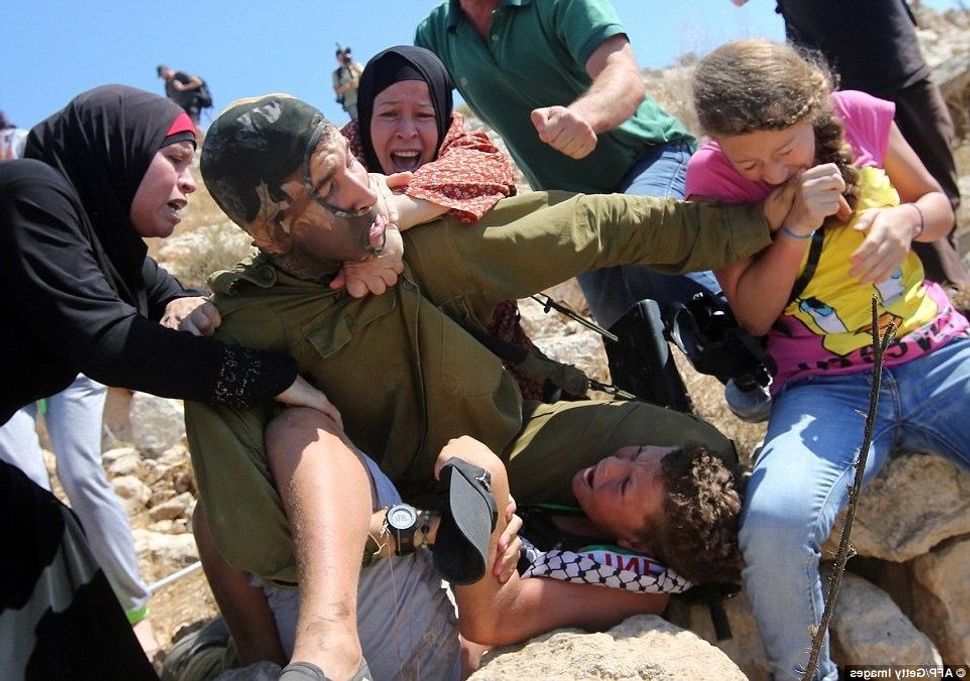 Video of a violent confrontation last Friday between a 16-year-old Palestinian girl, Ahed Tamimi, and two IDF soldiers went viral. As Tamimi proceeds to hit the soldiers, they refrain from any reaction, stoically absorbing her blows without responding to them.

In retrospect, it was obvious that the video would go viral.

For Israelis, the video was emotionally appealing. Watching the patience of the soldiers absorbing the angry young woman’s blows, no doubt many Israelis thought, “This could be me or my son.”

For Palestinians watching the video, Ahed Tamimi represented the celebrated role model for the Palestinian upriser. For the Palestinian audience, too, the images were emotionally appealing and relatable. Many Palestinians no doubt thought, “These soldier could’ve been in my yard,” and the drama of a young girl confronting the army soldier no doubt instilled a sense of pride.

But Ahed Tamimi became a celebrity long before Friday, and Friday’s video was not her first viral one. Over the years, the young Tamami has been filmed on camera mostly in vocal confrontations with soldiers and officers of all ranks. In these confrontations, Tamimi is confident and feisty, but most importantly, she clearly has confidence that the soldiers won’t do anything to harm her.

This is the minefield that the IDF faces in its operational activities in the West Bank. On one hand, terrorist organizations like Hamas are constantly trying to attack, abduct and kill. On the other hand, soldiers are trying to protect Israelis and themselves from a multifaceted, seemingly unorganized volley of lone wolf attacks and violent riots. Then there’s the visually appealing confrontations, like the ones staged regularly by the Tamimi family. Indeed, the Tamimi family have made a profession out of the weekly confrontations in Nabi Saleh.

The viral nature of these man-bites-dog type events are a given in the theater that sometimes characterizes the Israeli-Palestinian conflict. These soldiers are forced to perform their duties under the harsh reality of everything being filmed and uploaded or streamed as they happen. The IDF understands this and trains and prepares the forces for this challenge prior to deployment.

Friday’s video is a perfect example of this training. It shows the soldiers displaying restraint and a clear understanding that Ahed Tamimi was trying to provoke them into a violent confrontation for the sake of getting it on film. A slap from a screaming teenaged girl was just the tool for another viral escapade from Tamimi Production inc.

The officer and the soldier in the video did not step on to the minefield, remain composed, calm and collected, and maintained a standing. Many of us felt deep pride at their composure. Avi Buskila, Chairman of the Peace Now organization was quoted as saying that “The soldiers acted heroically, exactly how is expected from them.”

But others did not. “When I watched that, I felt humiliated, I felt trampled,” Miri Regev, an Israeli Cabinet minister and former military spokeswoman, said, calling the incident “damaging to the honor of the military and the state of Israel.”

For the soldiers, a young screaming girl doesn’t pose a real threat; they’ve confronted violent riots after all.

The company commander could have easily arrested the Tamimi provocateur; she would’ve screamed and shouted and bit and punched, and it would’ve all been on video. Needless to say, they wouldn’t have shown the provocation prior to the arrest. She would’ve appeared on the leading world media, at the top of the hour, and she might have even received another prize for standing up against the soldiers.

But the commander made a tactical decision not to arrest her. He knew his mission was to prevent more people interfering with the crowd control activities in the village, and dealing with the screamer wouldn’t have contributed to the fulfillment of his mission.

However, while he didn’t willfully stroll into the minefield, by inaction and waiting until the video surfaced, the IDF still walked into an ambush. The media ambush was sufficient enough to go viral, and make all national Israeli media publications and broadcasts. Self-serving politicians from both sides of the political equator jumped on the bandwagon, claiming humiliation, occupation and incapacitation, depending on where your politics or professional standings are.

The immediate effect was the Monday overnight arrest of Tamimi, and now she will be tried and prosecuted.

The question of course remains, why did the army wait until Monday night to arrest her for attacking a soldier after the video surfaced? If the military understood it was a minefield, why not prevent the ambush? Arresting her prior to the video going viral would have given the IDF some credibility that it isn’t an arrest out of spite due to a humiliating video. It would have empowered the military to have some control over the message.

The world media has already begun covering the story of the teenager who stands up to the Israeli machine. She will be celebrated, the court proceedings will be covered and her coming home party will be grand.

In their decision not to get dragged into the provocation minefield I believe the soldiers showed a side of the IDF that doesn’t usually get understood or covered. Yes, the reality on the ground is always more complex than that that the media would like us to believe. It’s soldiers like this that give Israel the moral high-ground in an area where that is constantly put into question.

Lieutenant Colonel Peter Lerner is a former spokesperson and head of social media for the Israel Defense Forces.