American Dollars Must Not Be Spent On Ahed Tamimi’s Arrest 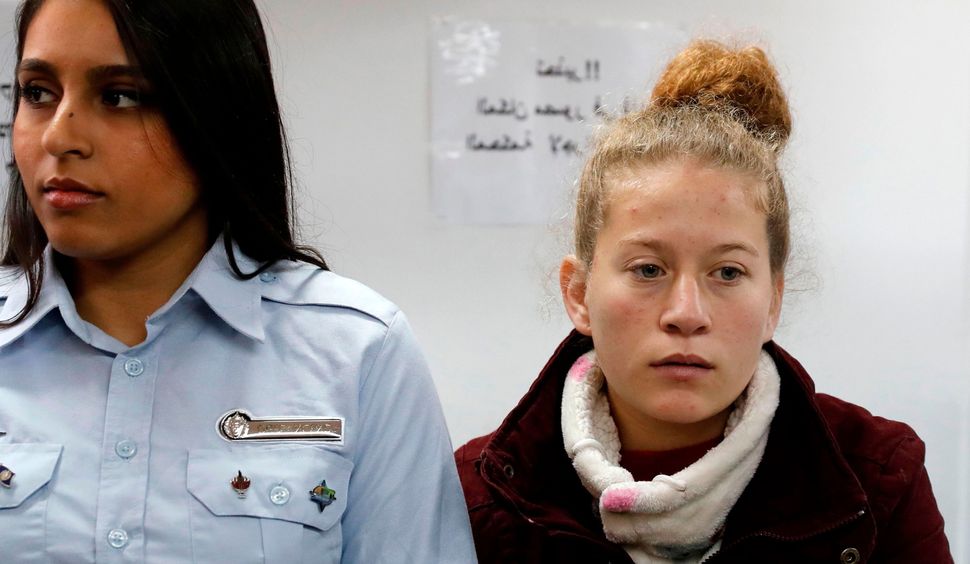 Last month, Israeli soldiers invaded the home of 16-year-old Ahed Tamimi in the middle of the night and carted her off to detention in handcuffs. The teenage activist, from the West Bank village of Nabi Saleh, has lived every day of her life under the brutal boot of Israeli military occupation. She has witnessed settlers gobble up her village’s land and water source, expanding illegal West Bank settlements. She has seen Israeli soldiers shoot, maim, and kill family members who demanded their freedom, including most recently her cousin Mohammad, who has shot in the face at point-blank range by an Israeli soldier and seriously wounded on December 15.

Moments after her cousin was shot, Ahed physically confronted heavily-armed Israeli troops stationed on her family’s property. Her slapping and shoving of soldiers elicited demands from Israeli ministers that she spend the rest of her life in jail. Earlier this week, the Israeli military filed 12 charges against her that could imprison her for the remainder of her childhood.

Ahed is now ensnared in a military detention system in which Palestinian children are subject to abuse and denial of basic legal rights. 75 percent of Palestinian children endure physical violence after being arrested by Israeli forces and 97 percent of children do not have a parent present during their interrogations, according to Defense for Children International-Palestine. The Department of State’s 2013 annual Country Report on Human Rights Practices for Israel and the Occupied Territories, citing human rights organizations, noted that Israel’s abuse of Palestinian children in detention includes “beatings, long-term handcuffing, threats, intimidation, and solitary confinement,” which in some cases amount to “torture.”

Not only are Palestinian children subjected to what UNICEF termed “widespread, systematic and institutionalized” ill-treatment by Israeli forces; they are also railroaded into a separate-and-unequal military court system lacking in fundamental due process guarantees. According to Haaretz, Palestinians are convicted at an astonishing rate of 99.74% in these courts. Meanwhile, Israeli settlers living in illegal West Bank colonies fall under the jurisdiction of Israel’s civil courts in which they are generally afforded due process guarantees.

Israel is the only country in the world that systematically detains and prosecutes children through military courts lacking basic due process guarantees. According to DCIP, Israel prosecutes between 500 and 700 Palestinian children in military courts annually and since 2012, holds, on average, more than 200 Palestinian children in detention at any given time.

Under an agreement signed in 2016 between the United States and Israel, US military assistance to Israel is scheduled to increase from $3.1 billion to $3.8 billion annually beginning next year. Even before this agreement, Israel was already the largest recipient of US military assistance, receiving more money annually than all other countries combined.

This increased largesse makes the United States more deeply complicit than ever in the human rights abuses that Palestinians, including children, face under harsh Israeli military occupation.

American taxpayers have a right to know whether their money is being used by Israel to detain, abuse, and prosecute Palestinian children through its discriminatory military court system.

An historic bill, H.R.4391— also called the Promoting Human Rights by Ending Israeli Military Detention of Palestinian Children Act, introduced by Rep. Betty McCollum (MN-4) last November, and cosponsored by 19 other Democratic Representatives, would prohibit US assistance to Israel being used to support the military detention, interrogation, abuse, or ill-treatment of Palestinian children.

This first-ever bill unequivocally supporting Palestinian human rights also would establish a sense of Congress opposing Israel’s military detention of Palestinian children, recognizing it as a practice that violates international law, and results in grave human rights violations that are contrary to American values of equality, human rights, and dignity.

To date, this type of bold language has been sorely absent from the policy discussion on this issue, which has largely been confined to ineffectual statements of support for a nonexistent peace process that has failed to deliver freedom, justice, and equality for Palestinians. This bill is an important step in reorienting the conversation to one which centers a human rights-based approach.

In addition to prohibiting US assistance from being used by Israel to support the military detention of Palestinian children, the bill also would provide a modicum of transparency and accountability in an attempt to ensure this does not happen. It would require the Secretary of State to certify that no amount of money has been used by Israel for this purpose. If the Department of State cannot make this certification, it must submit a report to Congress detailing how US funds have been used by Israel to aid in its military detention of children.

With US munificence to Israel expanding, the very least we can do is to ensure that this assistance is not being used by Israel to abuse Palestinian children through a separate-and-unequal military court system.

Congress should pass this bill to send a strong signal to Israel that the United States will no longer be complicit in this particular aspect of Israel’s human rights violations of Palestinians living under military occupation.

Josh Ruebner is Policy Director of the US Campaign for Palestinian Rights and author of Israel: Democracy or Apartheid State?.

American Dollars Must Not Be Spent On Ahed Tamimi’s Arrest