BDS’s Roots Are Steeped In Anti-Semitism 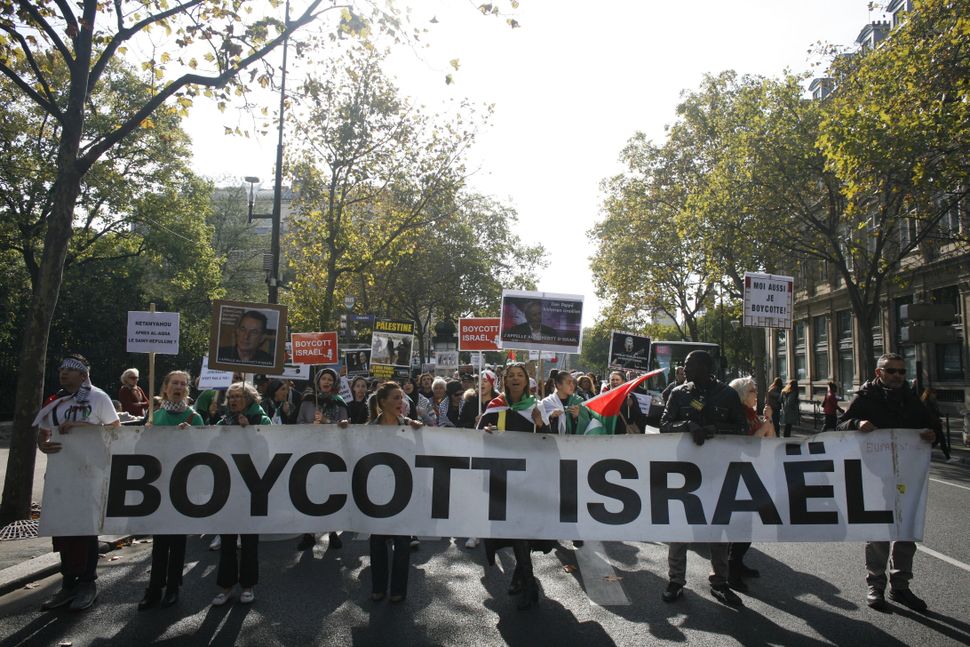 The spectacle of boycotters being outraged about getting a dose of their own medicine makes it tempting to enjoy a moment of comic relief – after all, it’s a bit like one of those delightfully absurd Ephraim Kishon stories: there are characters that devote enormous energies to preventing artists and academics from going to a country that they want boycotted into oblivion, but when these characters are told they themselves can’t visit this country, they scream GEVALT.

But this momentary glee cannot erase the fact that the Boycott, Divestment and Sanctions movement has sinister goals and historical roots that inevitably evoke disturbing memories from our not-so-distant past.

A quick survey of boycotts against Jews puts BDS in extremely unfortunate company. Consider the echoes of today in this archived JTA article from September 24, 1929. The article reports statements made by the Grand Mufti Haj Amin al-Husseini, who rejected entirely justified accusations that he had incited the notorious 1929 Hebron massacre and the subsequent Arab violence, which left 133 Jews dead. “[I]t is untrue that the world is siding with the Jews,” the Grand Mufti said. The entire Muslim world stands at the ready with their armies, he said. And yet, the Grand Mufti insisted that,

“Help is unnecessary. We will win through an economic boycott. The boycott in Moslem countries against Jewish industries is tight and daily growing tighter, until the industries will be broken and English friends, moved by pity, will remove the last remaining Jews on their battleships. Today there’s not a Jewish factory working in Palestine and […] as Jewish industry depends on the good will of the surrounding Moslem countries, the factories may as well remain closed. The Moslems will not buy.”

Obviously, the Mufti’s hope to drive the Jews from British Mandate Palestine through an economic boycott – complemented with murderous violence – remained unfulfilled. But he would certainly be pleased that almost a century later, much of the Muslim world still insists on boycotting Israel economically and politically – even to the extent of banning Israeli chess players from participating in international tournaments, or denying Israeli medalists their flag and anthem at international sport events held in Arab countries.

There can also be little doubt that the Mufti would approve of the current BDS movement, which remains rather confident that it is still “untrue that the world is siding with the Jews” and proudly claims to represent “a vibrant global movement.”

Recall that the BDS movement emerged in the wake of the World Conference Against Racism, Racial Discrimination, Xenophobia and Related Intolerance held in Durban, South Africa, in early September 2001. Unfortunately, the conference was hijacked by non-governmental organizations which sought to revive the notorious UN resolution equating Zionism with racism, a clearly anti-Semitic resolution seeing as the vast majority of Jews identify as Zionists and would thus be defined as racists. These NGOs issued a call for “a policy of complete and total isolation of Israel as an apartheid state,” including “the imposition of mandatory and comprehensive sanctions and embargoes, the full cessation of all links (diplomatic, economic, social, aid, military cooperation and training) between all states and Israel.”

This concerted effort to turn the world’s only Jewish state into a pariah provided the blueprint for the BDS movement’s agenda, importing the anti-Semitic component as well. For if your mission is to mobilize public opinion against the world’s only Jewish state in order to bring about its elimination, it’s all but inevitable that your activism can be summed up by slightly modifying the Nazi slogan “The Jews are our misfortune” to “The Jewish state is our misfortune.” It should also not be overlooked that the BDS movement began to emerge during the years of the violent Al-Aqsa Intifada, also known as the Second Intifada, which had been incited with the same baseless claims about the need to defend the Muslim shrines on the Temple Mount that al-Husseini had used some seventy years earlier to incite the Hebron massacre.

While the Al-Aqsa Intifada was still ongoing, the website Electronic Intifada published a programmatic essay by BDS co-founder Omar Barghouti. Barghouti denounced the two-state solution as an immoral ploy to save Zionism and hailed “what may be considered the final chapter of the Zionist project,” declaring with obvious satisfaction: “We are witnessing the rapid demise of Zionism, and nothing can be done to save it, for Zionism is intent on killing itself. I, for one, support euthanasia.” That’s right: Barghouti called for the mercy killing of the only Jewish State. Barghouti’s chilling declaration is arguably a much more honest description of the goals of BDS than any of the carefully calculated statements that can be found on the movement’s website.

Indeed, while BDS supporters claim their movement is non-violent, leading proponents of BDS and affiliated groups have shown a marked proclivity to cheer, or even incite and openly support, Palestinian terrorism.

Take for example the fact that the influential BDS advocate Ali Abunimah likes to refer to Islamist terror groups such as Hamas and Islamic Jihad as “Palestinian defense forces” which he applauds on social media quite openly, even when they target Israeli civilians.

Another example is the call for an “International BDS wave of solidarity with Palestinian Popular Resistance” that was issued at the beginning of the so-called “Stabbing Intifada” in the fall of 2015. Promoted on social media under the hashtag #SolidarityWaveBDS, the events were a transparent effort to whitewash the wave of murderous attacks by Palestinian terrorists as an “ongoing, youth-led Palestinian uprising.”

Yet another relevant example is the British group Friends of Al Aqsa (FOA), which is dedicated to promoting BDS and keeping alive the incendiary claim that Al Aqsa – understood as the entire Temple Mount/Haram al-Sharif – is constantly under attack from Jews. FOA’s current pinned tweet reads “FOA on Israel’s blacklist for #BDS – a Victory!” The group has been described as a “pro-Hamas” organization that “advocates Israel’s elimination.” FOA’s social media output includes numerous posts designed to incite religious hatred by denouncing visibly Jewish visitors to the Temple Mount as “extremist” and claiming that Israel allows “Jewish settlers … to storm [the] sacred al-Aqsa Mosque.”

This is the crucial context in which we should be asking whether the BDS movement presents a serious threat. Rather than focusing on the question of how successful are efforts to prevent artists from performing in Israel or to pressure companies to shun projects in Israel – efforts that aren’t yielding much – we should worry about the mainstreaming of anti-Semitic anti-Zionism promoted by BDS and, at least equally, about the whitewashing of terrorism that has long been part and parcel of BDS activism.

The world had two millennia to indulge the idea that Jews will be defenseless when they are boycotted or worse to drive them out from wherever they had settled. Now, Israel has the means to respond. But the Jewish state’s ability to defend itself militarily and politically remains an always anxiously scrutinized – and eagerly criticized – new phenomenon.

BDS’s Roots Are Steeped In Anti-Semitism