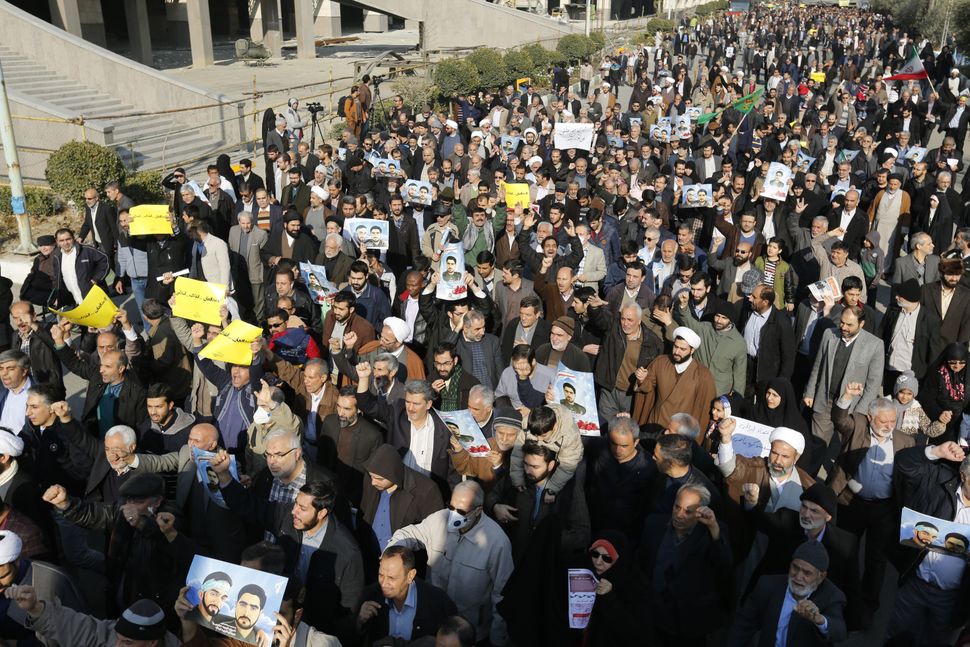 In Iran, the some officials look over their shoulders when before they speak at meetings. They look around them to see if anyone is listening before saying something, and when they have something important to say to each other, they whisper to the other person’s ear.

This is how senior Iranian officials serving in the country’s judiciary or members of the Majles (Parliament) have been observed to behave and communicate when meeting officials. It’s not the listening devices of the CIA, MI6 or the Mossad that they are concerned about, but rather those of rival of intelligence agencies of the regime who are spying on government officials.

The very fact that Iranian officials, sitting in government buildings or at official meetings, have to act as if they are in enemy territory in their own country is an important indicator of why we saw the recent outbreak of demonstrations in Iran, why we are likely to see them again, and why some people, especially in smaller cities and towns, called for regime change in their slogans.

It’s this dysfunctionality that has created so many economic problems, which have been exacerbated by political games played by various factions within the regime. One of the single biggest sources of structural malaise affecting Iran’s economy and political system is the country’s judiciary system, which is almost completely separate from the government.

This separation between government and judiciary is not the kind you have in America, meant to ensure democracy. Rather, handpicked by the supreme leader, the head of the judiciary operates arbitrarily and according to the whims of Iran’s various regime institutions, and their job is to protect the revolution. The Revolutionary Guards protect the regime militarily and the Guardian Council protects the regime politically by vetting elections, election candidates and parliamentary bills. There are also various Bonyads (foundations) whose job is to protect the revolution economically by creating shadow economic networks and companies who are answerable to the leader of the revolution (i.e. the supreme leader).

Because of their sensitive mission of guarding the regime, such Revolutionary Institutions have created a government within a government, and an economy within an economy. More importantly, they are the ones who on many occasions arbitrarily set the rules for how to deal with their competitors, be they economic or political, as they have the backing of the judiciary, which, on the overwhelming majority of occasions, does not interfere in their affairs, even if they act against the country’s constitution.

This is one of the reasons why we saw the recent demonstrations, which reportedly took place in 80 towns, cities and villages in Iran. Government inability to exercise sufficient control over the economy under Rouhani and even those before him have pushed up the cost of living and production, creating unemployment in Iran.

According to a recent study, to create a position of employment in Iran, it costs the government approximately $90,000. Meanwhile the cost of producing goods is estimated to be twice that of neighboring Turkey, while the cost of living has been rising steadily for the average Iranian family to the point where the food budget has been hit.

How can the government be expected to create employment when regime institutions run massive smuggling networks, smuggling everything from socks, mobile phones, textiles and even fruits! When such organizations can smuggle in containers and ships full of foreign goods at lower prices because many of them don’t pay customs, excise and on many occasions tax, the room for the domestic manufacturer to expand or exist is severely limited, thus exasperating unemployment. The gap between a worker’s cost of living and their wages is believed to be 60%. And that worker can’t legally organize independent trade unions to fight for its cause. On numerous occasions, Iranian factory workers have not been paid for six months.

Worst of all is the level of corruption, which is there for all to see. Iranian patients who go to hospitals and doctors sometimes have to pay Zir Mizi (under the table) money for their treatment. The famous Iranian director Mehran Modiri even made a comedy series showing the sorry and corrupt state of Iran’s health system, but it was cancelled before it finished, due to pressure and complaints from the health industry lobby.

Meanwhile, Iranian social media is full of pictures of the Nouveau riche showing off their latest imported Porsches and Bugatis. The Iranian daily newspaper Shargh often advertises $3,000 deluxe foreign watches while many in the countryside, especially farmers and those driven off their land because of the ravaging drought, can not even dream of such wealth.

Although the recent demonstrations were not as big as those in 2009, they were far more widespread across the country. They must have also come as a shock. To reduce the chances of them being repeated, Iran’s supreme leader, Ali Khamenei, has an important decision to make. Should he enable the Rouhani government to have more of a say in the economy, should he allow more political openings in the country and fight both corruption and monopoly power of regime institutions who are essentially the guardians of his regime, or should he not risk upsetting them by allowing the status quo to continue.

In all likelihood Khamenei will choose the latter, as he needs all the allies he can get. The fact that he has fallen out with every single living former Iranian President speaks volumes about his isolation from mainstream politics, while his sexist remarks against women who make up majority of Iran’s graduates, such as describing gender equality as a “Zionist plot”, show his disconnection from Iran’s youth, who make up a significant part of Iran’s population.

This week, President Trump is expected to extend economic sanctions relief for the Iranian regime while implementing targeted sanctions on key individuals and businesses.

If America were to reimpose nuclear sanctions, it would give the regime and the various bodies influencing the country’s economy an excuse for the sorry state of of the Iranian economy, and an external enemy to unite against. To allow the JCPOA to continue would do the opposite: to expose the fact that the Iranian regime, more than anyone else in Iran, is responsible for the badly broken state of Iran’s economy.

Meir Javedanfar teaches Contemporary Iranian Politics at the Interdisciplinary Center (IDC) in Herzliya, Israel. He is also a researcher at the Meir Ezri Center for Iran & Persian Gulf Studies at Haifa University. He tweets as @Meirja.