Trump Has Handed The Israel Lobby To Evangelicals. That’s Terrifying. 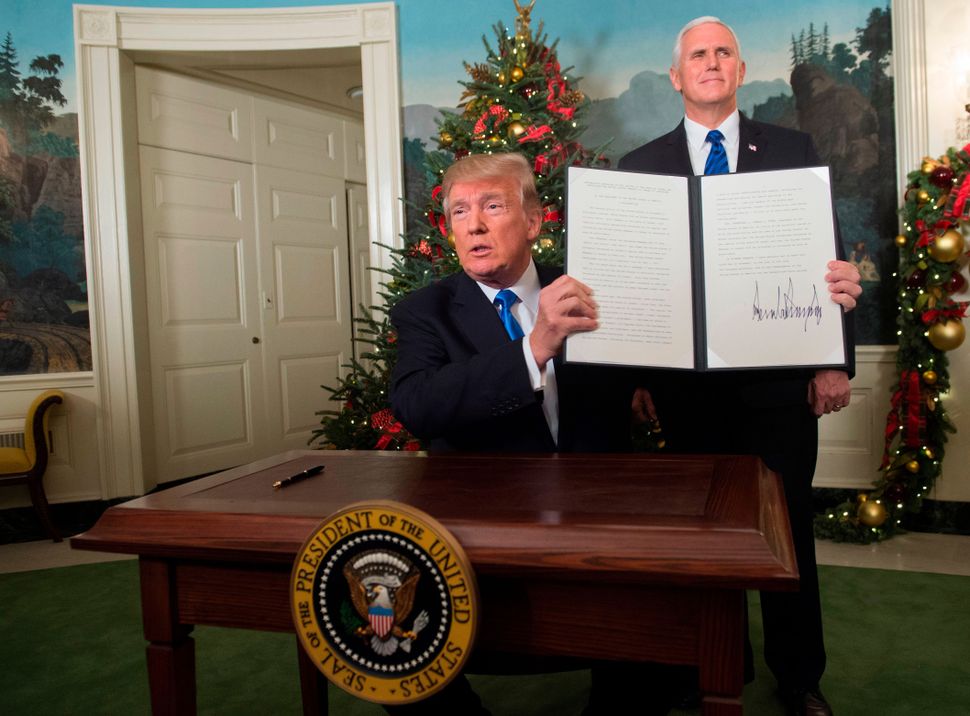 Vice President Mike Pence’s on again, off again visit to Israel is apparently on again for next week, but the actual timing was never the real thing. Pence and other deeply conservative white Christian evangelicals now driving American policy toward Israel and the Palestinians are playing a very long game that extends far beyond one news cycle.

They are turning public support for Israel — which largely had been bipartisan and religiously pluralistic — into an effort propelled by members of one political party and one religious worldview.

Their belief that Jews, and only Jews, must rule over Jerusalem to herald the return of Jesus Christ influenced President Trump’s decision last December to reverse nearly seven decades of American foreign policy and recognize Jerusalem as Israel’s capital. Their absolute fealty toward Israeli Prime Minister Benjamin Netanyahu and their antipathy toward the Palestinians are reflected in the itinerary for next week’s trip: Pence is not scheduled to meet with any Palestinian leader, the first time in decades for a top American official.

Some may welcome the way that the Trump administration has tilted the scales toward Israel and its current hard-line government. But there is real reason to worry when foreign policy is in the grip of fundamentalist ideology, when political issues become biblical ones.

And this shift is not confined to America. The president of Guatemala, one of the few leaders to so far follow suit and recognize Jerusalem as Israel’s capital, also relies on the support of his country’s influential Christian evangelical community.

The American Israel Public Affairs Committee remains the largest, richest and dominant Israel lobby in Washington, and its “big tent” approach still defines support for Israel in Congress and beyond. AIPAC prides itself on being bipartisan, and its annual convention attracts scores and scores of lawmakers from both sides of the aisle. While the number of yarmulke-wearing Orthodox Jews attending that convention has increased over the years, AIPAC still finds support in all Jewish religious denominations, and has actively courted other faith groups into its fold.

But after Trump’s unlikely victory, AIPAC is now directly challenged by Christians United for Israel, an evangelical lobby with a more hard-line and partisan approach that aligns with those setting the agenda in the White House.

AIPAC supports a two-state solution; CUFI does not. AIPAC was slow to endorse the Taylor Force Act to strip the Palestinian Authority of some funding; CUFI is in favor of defunding the P.A. entirely. AIPAC stayed largely on the sidelines in pushing for the Jerusalem decision; CUFI was out front.

CUFI has strong personal ties to the White House now that Pence is hovering over Trump’s shoulder. Pence visited Israel with CUFI in 2014 and addressed its annual conference this year. The son of its chief Washington lobbyist is a senior Pence aide.

“The vice president has been a lifelong friend to Israel,” The Rev. John Hagee, CUFI’s founder and chairman, told Politico after the Jerusalem decision was announced.

In the same interview, Hagee said words that we’ve become accustomed to hearing from Orthodox Jews: “[F]or millions of evangelical voters, the president’s position on Israel was a central factor in their support for him in the 2016 election. I think over the past year, and of course in the past week, we’ve seen that our trust in President Trump was well placed.”

And, perhaps not coincidentally, Trump and CUFI share a major benefactor: the megadonor Sheldon Adelson, who publicly broke with AIPAC some years ago.

These political shifts, expected when new administrations assume power and new parties ascend, are made more consequential because they are rooted in a fundamentalist religious doctrine. Whereas AIPAC embraces many strains of Jewish practice (or none at all) the white evangelical Christians who have Trump’s ear are absolutely certain of their faith-derived convictions.

“This runs deep. It is a core value,” Richard Land told me in an interview. “I can’t imagine that Jewish people and Israelis can have a stronger ally than the evangelical Christians who believe as I do. Even if they attack us, we are going to turn the other cheek. There’s nothing we’re going to do that will stop us from being pro-Jewish and pro-Israeli.”

Land is the president of the Southern Evangelical Seminary in Charlotte, North Carolina, and formerly ran the public policy arm of the Southern Baptist Convention. “Evangelical Protestants, the majority of them, believe that God made certain promises to Israel and that those promises are still in force,” Land said. “That the Jews are still God’s chosen people. That he gave the land of Canaan to the Jews forever, in obedience and disobedience.”

Since Land and others like him believe that Jesus Christ will only return as the Messiah when Jews reside in Canaan and rule over Jerusalem, the establishment of the State of Israel in 1948 is considered a fulfillment of one aspect of biblical prophecy. Trump’s announcement on Jerusalem is another one.

That’s because their faith is predicated on Jews playing a major role, though one that can make many of us uncomfortable.

And while Americans of many faiths subscribe to the idea that Jews, Muslims and Christians pray essentially to the same God, evangelical Christians like Land do not. “The God of Islam is not the father of our lord savior,” he told me. “It’s a different God entirely. I see no resemblance between the God of Islam and the God of Christianity and Judaism. I don’t recognize the God of the Quran.”

So while Jews have a starring role to play in this biblical drama, Muslims decidedly do not. And this isn’t just about what’s going to happen in the Middle East today. Land believes that the only way God will bless America is if America blesses the Jews. And America blesses the Jews by pursuing a foreign policy that ensures Jewish autonomy over all of ancient Israel, including Jerusalem. Including the Temple Mount.

“The Jews being back in the land and being in control of the land is part of the fulfillment of biblical prophecy, “ Land insisted. “If we were, as a country, to thwart the Jewish people and their desires and their God-given right to occupy that land, then God would not bless us as a people.”

This explains how and why a segment of Americans of very deep faith can support not only Trump’s decision on Jerusalem, but also the many other ways Trump has singled out, demeaned and harmed Muslims. They are simply not blessed. We Jews are.

Policy that is shaped by religious belief has a place in the American public square. But when fervent religious belief is entwined with political power, when the resultant policy is perceived to be divinely ordained, it can become dangerous. It becomes impervious to compromise. It can flare into a holy war.

Politics can make some very strange bedfellows. But before American Jews — Israelis, too — embrace this new alliance for what it may deliver temporarily, we should consider the long-term consequences. Evangelical support for Israel may be heartfelt, but in the end it is transactional. And ultimately Jews may pay the price.

Sign up here for her weekly newsletter, Jane Looking Forward.

Trump Has Handed The Israel Lobby To Evangelicals. That’s Terrifying.