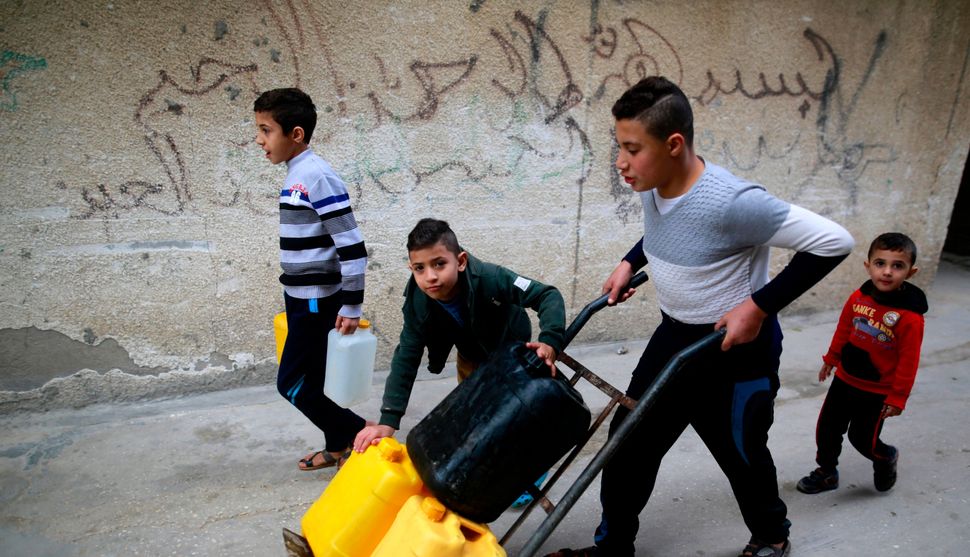 During the summer of 2005, while the Israeli army was preparing to evacuate 7,500 Jewish settlers and end its 38-year military presence in Gaza, I spent quite a bit of time wandering around the coastal territory, talking to soon-to-be-displaced Israelis and to Palestinian residents. I moved between the destitute Palestinian refugee camps, crowded and slumlike, and the flourishing Jewish settlements, which looked like suburban communities in southern California with their red-tiled roofs and sparkling green lawns. Everyone seemed to have a lot to say. The Jews were mostly angry — vociferously so. But the reactions of Palestinians I spoke with seemed, on the whole, to be muted.

I was reminded of that summer earlier this week, just after the Trump Administration announced its intention to slash its annual contribution to UNRWA, the United Nations Reliefs and Works Agency that was established and given a mandate by the UN General Assembly.

The White House’s announcement brought to mind a conversation that took place one scorching afternoon in that summer of 2005, in the Shati refugee camp near Gaza City. There I met two men in their late 30s who spoke fluent Hebrew, which they had learned while working for years as day laborers in Israel. There was a time when Gazans could freely enter Israel, in an odd sort of pre-Oslo de facto one-state scenario. But with Israel’s withdrawal of its military bases and settlements, an impermeable border was about to be drawn.

This is why the two men I was speaking to that day were not exuberant at the prospect of Palestinian self rule in Gaza. The Israelis, they said, had all the power. They would, added one of the two, probably make Gaza into a big, open-air prison. The other nodded in agreement.

“They’ll lock us up and throw away the key,” he said.

At the time, I thought this analysis sounded conspiratorial at worst and unnecessarily cynical at best. And I was surprised, because the two men were gentle and friendly toward me; they seemed touched at my interest in their opinions and proud of their fluent Hebrew. They agreed to let me take their photograph, on condition I not publish their surnames.

One of them asked if I knew “Avi, who owned the catering hall in Petah Tikvah” where he had worked for years, before the army imposed a closure on Gaza with checkpoints that made the round-trip daily commute impossible. As a result of the closure,, both men had been reduced to scratching out a living in Gaza — one as a taxi driver and the other as a plasterer and tile layer. They seemed convinced their lives were about to become even harder.

Of course, those two men turned out to be prophets; and perhaps the setting of our conversation goes some way toward explaining their pessimism. We met on a street in Shati, a densely populated slum with no sidewalks and not a speck of green. Shati is only a mile square, but it is home to over 85,000 people. It was originally established to accommodate just over 20,000 people as a temporary stopping point for refugees fleeing the newly created state of Israel after 1948. But as the refugee question remained unresolved, Shati’s residents built houses to replace their tents, as so many Palestinians have in Gaza, the West Bank, Jordan, and Lebanon.

All the essential services in Shati, as in all the other Palestinian refugee camps, are administered by UNRWA. UNRWA runs the schools, health clinics, social services and infrastructure in the refugee camps. It also distributes food staples.

In Gaza, where youth unemployment is over 40% and the majority of the population are refugees, about 80% of the population depends on UNRWA-distributed benefits to feed their families. That’s 1.6 million people.

There are UNRWA-administered camps in the West Bank as well as in Jordan, Syria and Lebanon. In total, around five million Palestinians around the Levant depend on UNRWA for public school education, health clinics, social services and employment.

UN member states contribute to UNRWA voluntarily. The United States has for decades been one of the largest donors, but the Trump administration just announced its intention to slash its contribution. According to an agency spokesperson, the U.S. gave only $60 million this year, which is a reduction of 80% from its previous commitment of $355 million.

You can imagine what the dissoution of UNRWA would mean to the five million people depending on the agency for food. And yet, UNRWA is in some circles deeply unpopular. Prime Minister Benjamin Netanyahu supported the U.S.’s decision, albeit belatedly, pronouncing UNRWA to be “an organization that perpetuates the problem of the Palestinian refugees,” with the “aim of eliminating the State of Israel, and therefore UNRWA must disappear.”

Similarly, Elliot Abrams, a former U.S. diplomat who served in the Reagan and George W. Bush administrations, approved of Trump’s decision; he sums up the argument against UNRWA in this blog post for the Council on Foreign Relations (CFR). Like Netanyahu, Abrams believes that UNRWA enables Palestinians to be perpetual refugees; his position, which does not account for the brutal chaos of Syria and the humanitarian crisis in Gaza, is that they should become citizens of their host countries and move forward, rather than relying on UN handouts.

Leaving aside whether or not UNRWA’s mandate is politically desirable, the fact is that millions of people would be left without food, money, healthcare, and schools if UNRWA were suddenly forced by financial exigencies to close down its operations.

When those two Hebrew-speaking Palestinian men rested against the hood of a car and talked to me on a dusty road in Shati 12 years ago, they were not interested in pleading their cause as refugees who deserved to return to their homes in Be’er Sheva or in Jaffa, the places their grandparents had fled decades ago. I’m sure that return is their ultimate aspiration, but their immediate need was to work and feed their families. They knew I was Israeli and Jewish and had no problem with that; and in fact, I never experienced a moment of physical insecurity in Gaza, even though this was a time when journalists were being abducted and detained for ransom.

Those men were focused on survival; they needed UNRWA because Israel kept them trapped inside Gaza and prevented the local economy from functioning with its draconian restrictions on imports and exports.

But the children of those men have lived their entire lives under military closure and Hamas governance. They have never met Israeli civilians. They only associate Israel with air strikes and military invasions. If there were no UNRWA schools, they would be educated in Hamas’s Islamist schools, which would most likely harden their views of Israel.

Indeed, Abrams writes that UNRWA is too close to Hamas, but the opposite is true. Hamas is locked in an ongoing battle with UNRWA for control over its schools and its summer camps for children. Hamas wants those children to be educated in their Islamist schools, rather than UNRWA’s secular schools; and it wants the children to attend military summer camp, rather than UNRWA administered summer camps where the kids play with balloons and engage in arts and crafts.

If Israel wants UNRWA to disappear, the only way to achieve that goal is to sit down and resolve the refugee issue. There are no short cuts. Simply starving the agency of funds until it is forced to shut down is pure cruelty. It is punishment of children for the perceived sins of adults.

Lisa Goldman is a contributing editor to +972 Magazine, which she co-founded. She lives in Montreal. Follow her on Twitter, @lisang.