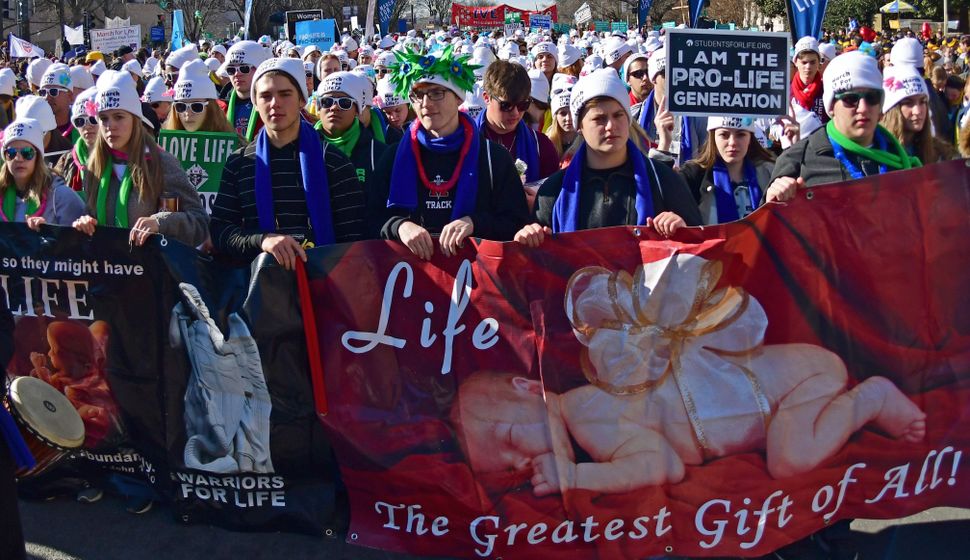 Forty-five years ago today, the United States Supreme Court, in Roe v. Wade, affirmed that a woman’s right to an abortion was protected by the U.S. Constitution. The decision gave total autonomy to women to terminate a pregnancy during the first trimester, and prevented states from interfering in that right.

But — and this is a crucial but — the court said that states could limit that right in the second and third trimesters, acknowledging that the mother has less autonomy as the fetus approaches viability.

Every year at this time, I feel the need to shout that from the rooftops. Roe does not guarantee an unfettered right to an abortion for all nine months of a pregnancy. It does not permit “abortion on demand.” It says that states may not regulate access in only the first trimester; after that, the ruling sets up a sliding scale in which states can decide to protect the “potential life” of the fetus as it grows closer to term.

I bet this is news to many of you.

I’m sure it’s news to President Trump, once a great supporter of a woman’s right to choose and now its most powerful opponent.

For four and a half contentious decades, the anti-abortion movement has skillfully redefined Roe as representing an extreme position when it does not. Then, that movement has successfully chipped away at Roe’s tiered approach in subsequent court decisions to further blur what every woman who has ever been pregnant knows: It’s not a moment. It’s a process.

Now, when Trump is taking major steps to promote and enact a slew of anti-abortion measures to appease his newfound, newly energized religious base, it’s more important than ever to uphold the truth about Roe in order to save it. And — another news flash — most Americans want to save it.

Roe is actually a wise compromise, crafted (surprisingly) by an all-male Supreme Court, written by a justice, Harry Blackmun, who once thought about becoming a doctor. Unfortunately, our political debates don’t reward wise compromises, nor do they make much room for nuanced arguments or ideas that can’t fit neatly on a protest placard. That may be one reason that the decision has been reduced inaccurately to its extreme core.

So for decades, Gallup has consistently asked Americans whether abortion should be legal under any circumstances, which Roe does not, in fact, guarantee. Still, about three in 10 Americans believe it should be. When a second category is included — legal under only certain circumstances — the total percentage soars to about eight in 10.

Because, in fact, only a minority of Americans believe that abortion should be illegal in all circumstances. In 2017, Gallup recorded 18%. (Vice President Pence, are you listening?)

These numbers roughly conform to other polling. The Pew Research Center, for instance, found last year that seven in 10 Americans opposed overturning Roe. That included even a slim majority (53%) of Republicans.

Nonetheless, these strict anti-abortion activists have assumed an inordinate amount of political power, propelled by a president who has chosen to join their cause quite late in life, and now is pursuing it with a vengeance.

So it’s past time for those of us who believe in the inherent wisdom of this 45-year-old decision to voice our support by saying what it does and does not do. If you believe that life begins at conception, and that therefore any abortion at any time is akin to murder, then there can be no compromise in the law. I understand that. (What I don’t understand is the argument for exceptions for rape and incest, which sound compassionate but are, in fact, illogical. Is the fetus resulting from a rape no less a person?)

But proclaiming that life begins at conception is a belief, not a fact. It is not supported by scientific evidence or by any lived experience. With all the advances in modern medicine, the fetus cannot survive on its own as an independent human being until its lungs develop well into the pregnancy. As it does, as any pregnant woman will tell you, it begins to become real, a “potential life” in Blackmun’s terms, and therefore deserving of protection. Roe allows for that.

I’ve always been uncomfortable by any cavalier language about abortion, as if it’s an ordinary surgical procedure, no different from a tooth extraction or the removal of a benign cyst. It is a weighty decision that I have been fortunate not to have been forced to make, but is one many women I know have. (Read this moving collection of stories from Forward readers.)

All these years later, the wisdom of Roe reflects that complicated reality. Most Americans understand it. We can’t allow a minority president to change that.