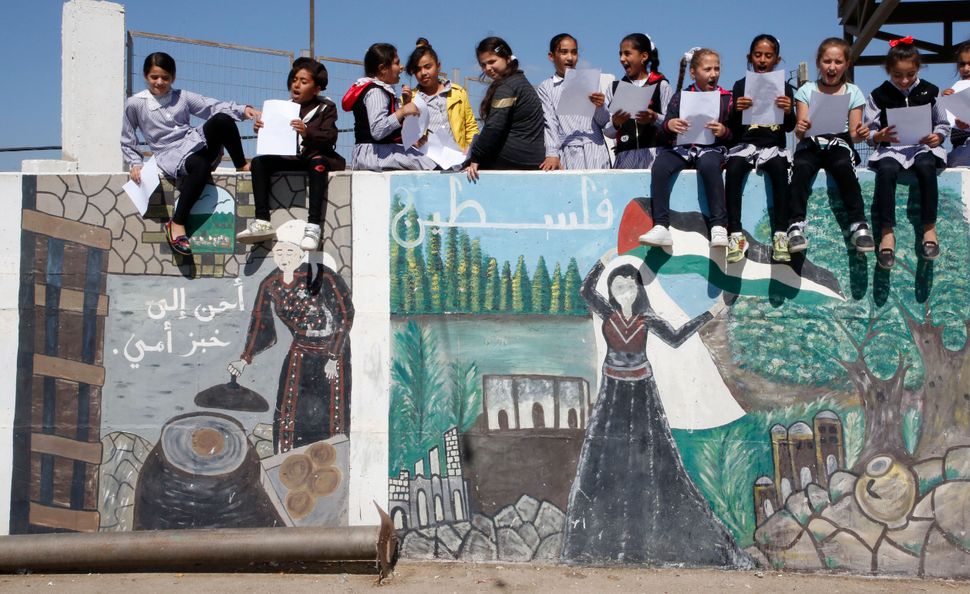 Last week, the US announced its decision to start defunding UNRWA, the United Nations Reliefs and Works Agency. If defunded, an immediate catastrophe will surely follow.

UNRWA, which provides aid to Palestinians through a combination of food, schools, medical and other services, means life to more than two thirds of Gaza’s two million residents – as it did for me. I grew up studying in UNRWA schools.

I can still clearly remember the happiness and excitement in my late father’s eyes on my first day of school, the same UNRWA school where he studied himself as a child. He put me in his old classroom, and even sat me down in the same old wooden bench were he sat 30 years before. I remember so clearly the dream in his eyes, that I’d be as successful in life as he was.

Even when he grew older, he always took me with him to visit his old primary school teachers to pay tribute for how well they raised him, a tradition of appreciation that I inherited from him.

For my father, this school was the school that made him an accomplished doctor, and later made me an engineer. Without it, he often told me, “I would have remained a barefoot refugee in a muddy camp flooded with sewage water,” dependent on barebones subsistence aid to cling to life.

I loved my UNRWA school just as my father did. In its familial environment, I developed some of the best memories of my life. It was free, so everyone had equal opportunities. Students from all different segments of society were always welcomed in: rich, middle class, poor and even those far below the poverty line; we never felt the wealth divide. I remember with great fondness those gifts made by students like us from Japan; those cotton bags filled with colorful messages, toys, and origami and drawing papers meant the world to me and to many of my friends and family.

The teachers were paid better than those who worked for private or government schools, so they performed far better, keen to enrich our lives with knowledge. We had poetry and short story competitions, drawing lessons, morning exercises, field trips and computer tutorials.

Contrary to many reports, the UNRWA school I attended educated my fellow students and me about the Holocaust. For a few years, UNRWA even had the funding to organize travel for selected students — to the Netherlands and the US. Students would travel in two groups — boys and girls separately — and were taken on tours of Holocaust Museums. The group that went to the Netherlands visited the Anne Frank house. And while we did learn in UNRWA history books about the Palestinian villages that were destroyed in 1948, we also learned about the 1967 borders.

We strove for excellence, and encouraged to dream big, limitless dreams, despite the aggressive obstacles around us. UNRWA provided a generous hand to overcome the tribulations of life in the beleaguered Gaza Strip. When I got top scores in my final exams, I got to shake hands with UNRWA’s director, John Ging, at the celebrations for the best students. This became a story that I took pride telling others about.

When I was orphaned, the entire school, all the teachers and students, came to my dad’s funeral. They were my second family. And later, the school staff did their best to make it a matter of no shame to me; they gave me and other orphans free uniform clothes, notebooks, bags and gifts.

I wasn’t the only one to receive such care. Each semester, UNRWA supplied free medical glasses to shortsighted students and ran periodic medical and dental examinations; they also provided vaccinations to all students. For many years, UNRWA provided students with healthy meals on a daily basis, handing out fruit, sandwiches, milk and homemade pastries that employed thousands of people in a project funded by Mercy USA. These meals helped many poor students, who had no food at home, to focus better; a few children wouldn’t eat these meals, but would hold on to them, taking them home to share with their starving families. For a few years, UNRWA was even able to give stipends to 200,000 students, about 200 NIS yearly for each student. This tactic got more children back to school even when life was unspeakably harsh, helping to raise literacy rates to above 98% in Gaza.

In hard times, UNRWA provided the final barrier against extreme living conditions. When the Palestinian Authority couldn’t pay its employees’ salaries for more than a year, UNRWA provided food packages to most people in need, and it still does, to millions of people. After military conflicts, UNRWA helped thousands of displaced people rebuild their homes, and UNRWA schools organized summer camps to try to relieve students of the pain and dark memories. These camps provided tens of thousands of temporary jobs to a youth population where unemployment is the highest in the region.

Sadly, over the last few years, UNRWA’s funding has fallen short, and its budget has become more austere. Attention has deviated away from its meaningful and crucial work, work that affected every aspect of life for millions of Palestinians.

I fear that my younger siblings and the future generations won’t enjoy the same chances I had, now that many UNRWA schools have to operate in two or even three shifts a day, now that schools and clinics are underfunded and some are being shut down. What opportunities will young Gazans find now that teachers no longer receive income and students find no incentives for learning when surrounded by a depressing environment and bleak future?

Gaza has received many harsh blows in recent years. The situation on the Strip has only been getting worse and worse. Gaza’s economy is highly compromised and dysfunctional. The private sector is virtually non-existent, and 80% of the population depends on aid for basic survival. Hamas’ government employees receive just a fraction of their salaries — about $300 every two months — which barely supplies the needs of the average Gazan family of seven. Most PA employees are swamped in a poverty and debt, struggling to put food on the table. The likelihood of young, highly educated graduates finding a job are close to zero.

UNRWA’s employees are the only ones left who receive their salaries on time. Theirs are the households still capable of keeping the devastated economy running with a minimum purchasing power, and UNRWA is the only institution left capable of reaching the poorest members of Palestinian society. Each year, when UNRWA opens new positions for teachers, tens of thousands compete fiercely over a handful of vacancies, and the queues are endless when the whole burden is put on an organization struggling to fund its own staff.

UNRWA is Gaza’s painkiller, one that should remain uncompromised until a true solution to end Gaza’s pain is implemented. Taking it away in the middle of increased agony and devastation would be like cutting the oxygen supply of a mechanical ventilation system that keeps the slowly-dying population alive.

With UNRWA gone or underfunded, many people will have nothing to lose. An uptick in violence is a certainty.

Muhammad Shehada is a writer and civil society activist from the Gaza Strip, and currently a student of Development Studies at Lund University.