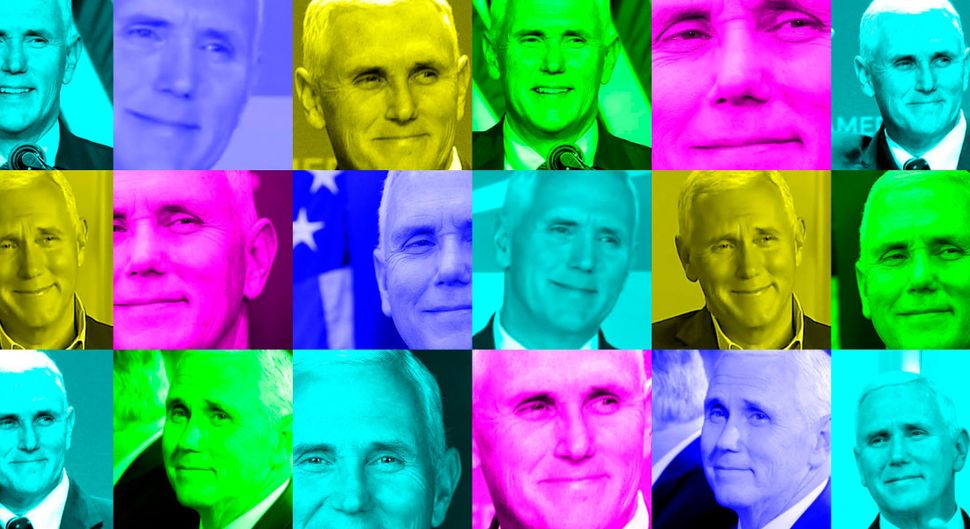 Vice President Mike Pence has been noted for his “close-cropped helmet of white hair,” his “folksy Midwestern drawl” and the “devotional gaze” he trains on President Trump. But his most striking feature is surely his smile.

It’s not really a smile. It’s actually more of a grin. He brought this very grin to the Israeli Knesset this week, where he was feted first by Prime Minister Benjamin Netanyahu and then by the leader of the opposition, Isaac Herzog: 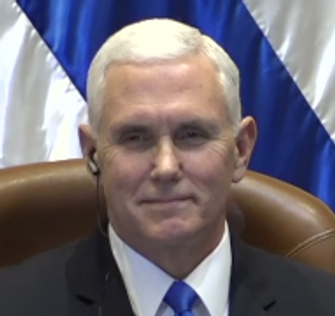 It wasn’t anything Netanyahu or Herzog was saying that elicited this grin. In fact, Pence may have been photographed more frequently with the grin than without it: 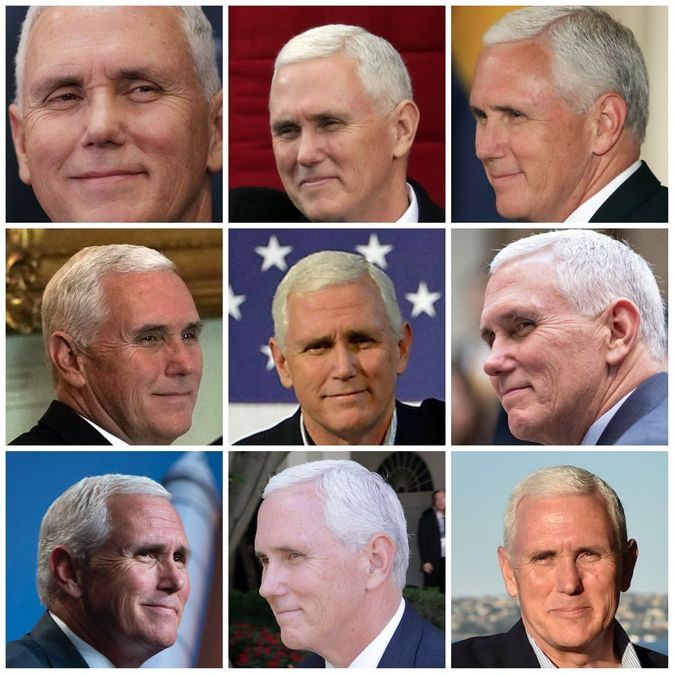 What are we to make of Pence’s ubiquitous Cheshire grin?

There’s a truth hidden in that grin that lies at the very distinction between a grin and a smile. A smile bespeaks mirth, whereas a grin suggests satisfaction (recall the etymology of “smile,” from the Old English “to laugh at” and the Latin “to wonder,” whereas “grin” comes from the Old English “to bare the teeth”). While a smile reflects feelings of pleasure, a grin is the result of thoughts. And not just any thoughts. A grin is the result of self-satisfied thoughts.

Mike Pence’s grin is the grin of a smug man.

Why is Mike Pence so smug? For one thing, he’s winning, and smugness is the singular provenance of winners. Furthermore, as an extensive profile in The Atlantic demonstrated, Pence believes he is winning for a very satisfying reason: because God wants it to be so. An evangelical Christian, “Pence is a man who believes heaven and earth have conspired to place him a heartbeat — or an impeachment vote — away from the presidency,” per The Atlantic’s profile.

Pence believes God has a plan, not just for him but also for everyone, especially if he agrees with his numerous co-religionist white evangelicals who believe that we are living in the end times. Having God on your side of an apocalyptic war is bound to send shivers of satisfaction down one’s spine, at least from time to time.

The problem is that Pence is no longer just a religious man. Now he’s also a very powerful one. It’s one thing to be smug when you’re a private citizen, to personally enjoy the good fortune that landed you in the correct religion. But it’s quite another thing to be a smug elected official or leader. When it reaches people of influence who command nations, smugness morphs into triumphalism — and worse when it has a religious component. Many people accused Barack Obama of being smug, but his smugness was not religiously motivated. Combine smugness and power with religious conviction, and you get something terrifying.

Hints of this mixture were everywhere in Pence’s speech at the Knesset. “In the story of the Jews, we’ve always seen the story of America,” Pence said. “It is the story of an exodus, a journey from persecution to freedom, a story that shows the power of faith and the promise of hope.”

In other words, it’s a story of winning.

“It was the faith of the Jewish people that gathered the scattered fragments of a people and made them whole again, that took the language of the Bible and the landscape of the Psalms and made them live again,” Pence went on. “And it was faith that rebuilt the ruins of Jerusalem and made them strong again.”

But when he spoke at the Knesset, Pence revealed a surprising source for his smug-cum-triumphalist talk, and it was a Jewish source.

As The Times of Israel exposed, it was none other than the former chief rabbi of England Jonathan Sacks who helped Pence write his Knesset speech. Sacks met with Pence for 90 minutes in November “explicitly to discuss themes and structure for the speech,” and Sacks was consulted throughout the speech-drafting process, TOI writes.

Why Sacks? Surely the vice president of America could have found an American rabbi to help him pen his speech. But it was Sacks whose former work most closely replicated what Pence sought. As TOI astutely notes, much of Pence’s speech was borrowed from Sacks’s own work.

When Pence said that “it was the faith of the Jewish people that gathered the scattered fragments of a people and made them whole again, that took the language of the Bible and the landscape of the Psalms and made them live again,” he was not only echoing the well-trodden trope of Israelis making the desert bloom. According to TOI, Pence was borrowing from an audio CD called “Israel — Home of Hope,” released in 2008, where none other than Jonathan Sacks said:

Pence also spoke of Abraham. Our patriarch “ruled no empire, he wore no crown, he commanded no armies, he performed no miracles, delivered no prophecies, yet to him was promised ‘descendants as numerous as the stars in the sky.’” Per TOI, these are “almost verbatim quotes from Sacks’s 2004 ‘Radical Then, Radical Now,’ where he described Abraham as someone who ‘ruled no empire, commanded no great army, performed no miracles and proclaimed no prophecy.’”

As the Sacks/Pence overlap shows clearly, Jews are no strangers to triumphalist narratives.

After all, we’re the chosen people.

Mike Pence, like the historical Jews, feels he has been chosen. One sees this immediately when comparing Pence to President Trump. Though he has not had quite the hard-knock life, Trump sees himself as constantly embattled. He is the opposite of smug; he’s constantly enraged because he hasn’t been granted what he believes he deserves. But in Pence’s grin is the sincere — and serene — belief that God is on his side. He’s been chosen.

But Pence’s tacit assumption of chosenness reveals the dark side of the concept; there is a difference between holding on to a belief in the chosen people as a psychological tool to overcome the indignities and horrors of violent diaspora and maintaining that belief when you are no longer the underdog but the one in power.

It’s the difference between religious chosenness and political chosenness. And while Jews have separated the two, Mike Pence has clearly combined them.

My colleague Jane Eisner discussed this at length, pointing out how dangerous it is that Trump seems to have ceded the Israel lobby to the evangelicals. Not only does this exclude Muslims, but “when fervent religious belief is entwined with political power, when the resultant policy is perceived to be divinely ordained, it can become dangerous. It becomes impervious to compromise. It can flare into a holy war.”

As Eisner notes, the Israel lobby in the hands of Jews like those of the American Israel Public Affairs Committee and the Israeli government by and large have eschewed the religiously driven beliefs in Jewish superiority or chosenness. If a small number of Orthodox Jews still believe that Israel’s successes are the result of the Jews’ chosenness, the vast majority of Jews — both in America and in Israel — have long abandoned this point of view.

In fact, Jonathan Sacks himself once did the same:

In a 2001 interview, wearing an almost Penceian grin, Sacks questions the notion: “After all, aren’t we one humanity? Didn’t God create every man in his image?”

Sacks concludes that God created the Jewish people to be different. “To teach the world the dignity of difference,” Sacks explained. “That you can be different from others and still be special.”

I wish this version of Sacks had made it into Pence’s speech. For the Sacks in this video is quite aware of the dangers of chosenness as a form of supremacy. So instead of endorsing it, he composed an apologia for it, transforming it into the liberal value of diversity to hide its problematic implications.

This was not the Sacks that Pence sought out. Instead of celebrating the holy value of diversity, Pence’s speech became the occasion for its erasure. Ushers dragged members of the Arab Joint List out of the Knesset when they tried to interrupt Pence, which in turn led Netanyahu to clap and grin (smugly).

We shouldn’t have been surprised, though. It was prophesied all along — in Pence’s grin.