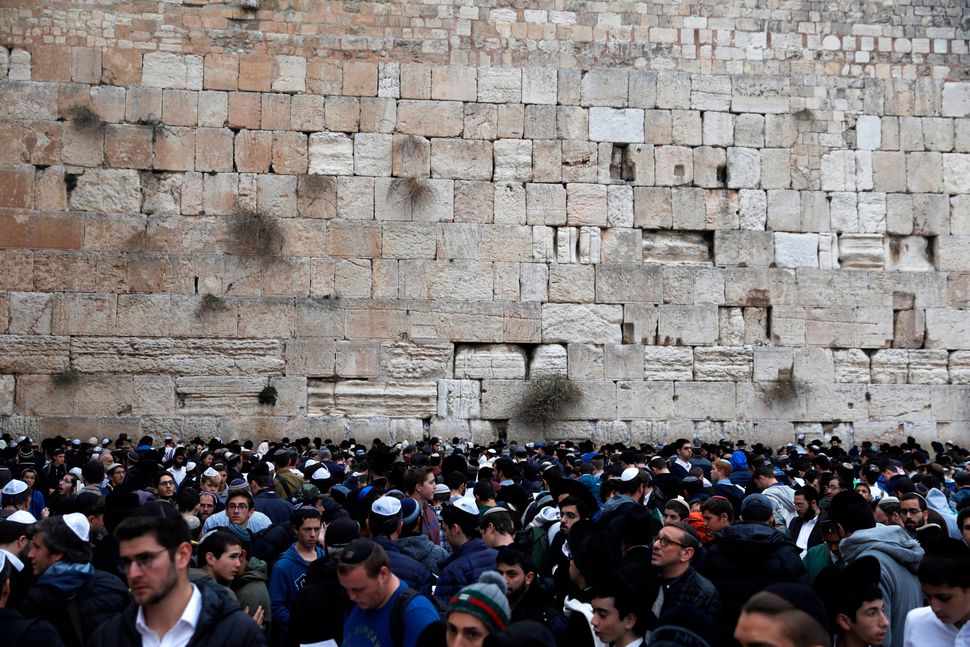 Some recent studies have yielded a disturbing picture: young American Jews are becoming more and more alienated from their elders’ full-hearted embrace of Israel.

It has led to some hand-wringing. “When young Jews stop identifying with Israel or caring about it, this reinforces a lack of engagement with their Jewish identity overall,” wrote Batya Ungar-Sargon recently in these pages. “Which means that losing our connection to Israel is catastrophically, existentially dangerous for the Jewish diaspora community.”

It’s consistent with the handwringing around another issue: the rapidly depleting numbers of liberal Jews. As sociologist Steven M. Cohen wrote also in these pages, “In 40 years, far fewer Jews will identify as Conservative and Reform, and far more will identify as Orthodox.” Furthermore, “Only the Orthodox are having enough children to fuel population growth.”

But these phenomena are related. Jewish engagement and Israel are mutually reinforcing forces, as Cohen and Ungar-Sargon note. And nothing proves that as much as the Orthodox.

Not only are the Orthodox not losing numbers; their attachment to Israel is stronger than ever.

The most recent data was collected by Cohen and social researcher Jack Ukeles from 3,000 respondents in the Bay Area.

They found that a mere 11% of Jews ages 18-34 said they were “very attached to Israel.” More alarming still was their finding that only 30% of American Jews in that age cohort said that they sympathized more with Israel than with the Palestinians. And, most startling of all, that only 40% of those surveyed said they were even “comfortable with the idea of a Jewish state.”

Now, the Bay Area isn’t exactly reflective of other parts of the country, as Ungar-Sargon notes. But they are consistent with an earlier study of the broader Jewish community — the 2013 Pew Research Center survey of American Jews. That study yielded a similarly worrisome portrait of young respondents’ feelings toward the Jewish State. It found that only a quarter of young Jews were very attached to Israel, and only a third felt that the Israeli government was making a sincere effort to bring about a peace settlement with the Palestinians.

And a study last year of the Greater Washington D.C. area’s Jews found that 40-50% of “young adults” felt little or no “emotional connection to Israel” at all.

But something’s missing from these surveys, something that offers reason to be optimistic about future American Jewish support: the Orthodox factor.

The Orthodox community is exploding. Although Orthodox Jews comprise only 10% of the American adult Jewish population, nearly a quarter of them are between the ages of 18-29. Orthodox Jews have more than double the average number of children than other U.S. Jews in their lifetimes. Because of this, enrollment in Orthodox day schools grew over 80% between 1998 and 2013. In the last decade, the major Jewish community of Baltimore saw its Orthodox population almost double. New Orthodox communities in states like Texas, Georgia, Ohio, Indiana and California, to name a few are growing and thriving across the United States in recent years.

Within the past two generations, according to Professor Cohen, the Orthodox population has nearly quintupled.

For it’s an indisputable fact that American Orthodox Jews are keenly pro-Israel. Eight-in-ten believe that Israel was given to the Jewish people by God, according to Pew, and 61% report being “very attached” to Israel. They visit Israel in large numbers, too: 77% of Orthodox Jews have been to Israel, and many send their children to study in Israel. They invest in Israeli business ventures and many eventually choose to settle in Israel themselves.

Most crucially, they support Israel, no matter the makeup of her government. In fact, more than half of Orthodox Jews think U.S. support of Israel is not strong enough.

Young American Orthodox Jews, like their elders, are the converse of the disaffected-with-Israel young Jews who are the subjects of the recent studies. Not only are they deeply focused on Israel, they tend to see current Israeli policy as entirely in consonance with their own views.

To be sure, there certainly are Orthodox Americans who would be more comfortable with a less settlement-eager, more transigent Israeli government. There are even some who (shhh! don’t tell!) supported Mr. Obama as having had Israel’s best interests in mind throughout his tenure.

What’s more, Haredim, who comprise the fastest growing (and arguably the largest) segment of American Orthodox Jewry, are hardly nationalistic; many are most accurately described not as Zionist but as a-Zionist (and some, as outright anti-Zionist).

But they care deeply about Israel’s security all the same, if only because of the fellow Jews who inhabit the country.

And outliers aside, the Orthodox mindset as a whole skews sharply toward distrust of the Palestinians — an attitude unfortunately well-nourished by things like Palestinian Authority school textbooks that demonize Jews and imams throughout the Arab world who loudly lust for the day when “a Jew will hide behind a rock or a tree, and the rock or tree will say: ‘O Muslim… here is a Jew behind me; come and kill him’,” in the enchanting words of the hadith.

And so, the Orthodox, for better or worse, are likely to remain firmly in the Likud camp when it comes to Israel’s relationship to the Arab world.

Jewish history is full of surprises. But a well-informed prognosticator conjuring American Jews’ relationship with Israel a generation hence might well foresee a polarized community, with secular and religiously liberal Jews on one side, trying to mold Israel in their own image, and a newly ascendant and formidable Orthodox community on the other, pushing Israel to the right.

There isn’t much cause for handwringing. If you’re worried about American Jews supporting Israel, giving charity to a kiruv organization that seeks to help Jews become more religious is probably the most effective thing you can do.

One thing is for certain: As the Orthodox grow in numbers, so will the American Jewish community’s support for Israel.