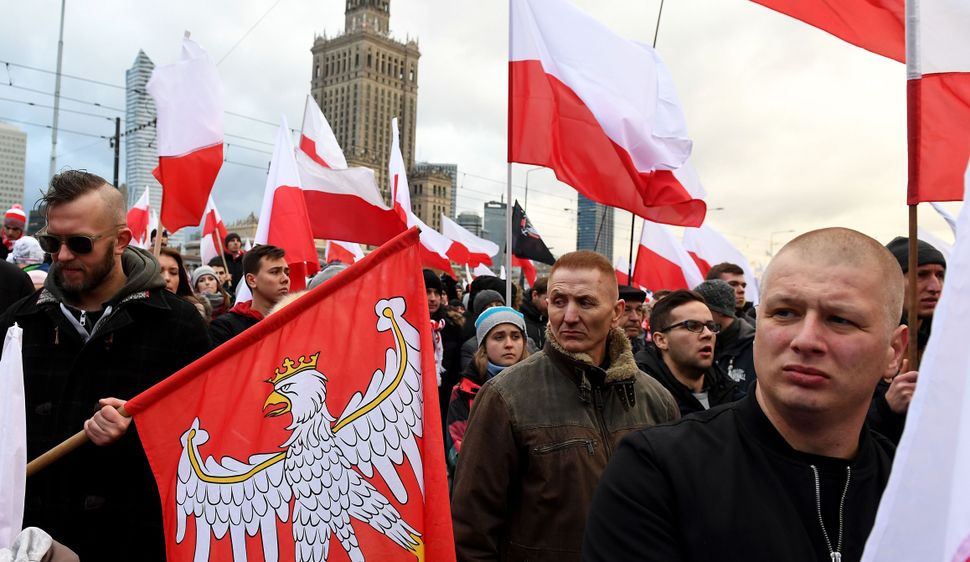 The Polish government’s new law criminalizing certain types of Holocaust speech may give comfort to nationalists in Poland, but it is having serious negative repercussions for the local Jewish community and for national memory.

The Polish Jewish community released an open letter, saying “Polish Jews do not feel safe in Poland” due to “the current wave of anti-Semitism [which] arose in response to an amendment to the Act on the Institute of National Remembrance,” i.e. the “Polish death camps” law.

Since the Law and Justice party came to power in November 2015, it has prioritized the promotion of Poland’s “national honor” and announced a new policy of national memory. A key element of that narrative is that Poland was only a victim in World War II, a position at odds with the complicated history of individual Poles who murdered Jews and certain organized Polish groups which fought alongside the Nazis during the war.

This new policy was the impetus for the recently passed law to ban the use of the phrase, “Polish death camps” (a phrase ADL has long opposed as inaccurate and unjust) and to criminalize public accusations that the Polish government or “Polish nation” bears any responsibility for the Holocaust.

Government ministers have rightly highlighted the roles of righteous Poles who saved Jews, or died trying, under German occupation, like the Ulma family, while wrongly questioning the responsibility of Poles for the mass murder of Jews in Jedwabne in 1941 and elsewhere. In an important positive example, President Andrzej Duda openly and completely acknowledged the responsibility of Polish citizens in the post-war pogrom in Kielce. His speech in Kielce, though, is the exception that proves the rule.

The friction arises when Polish officials try to portray Poland and Polish nationalists in the best light, and Jewish audiences understand the facts differently. In a recent example, Prime Minister Mateusz Morawiecki laid a wreath at a memorial to a Polish underground military unit, the Holy Cross Mountains Brigade, as a tribute to those who fought against the Red Army. In our eyes, though, he was honoring those who fought alongside the Nazis.

Instead of apologizing, which might be interpreted as detracting from Poland’s “national honor,” the Polish government issued a statement asserting that the Prime Minister’s words should be understood as “a sincere call for open discussion of crimes committed against Jews during the Holocaust, regardless of the nationality of those involved.”

Jews are rightfully wary of Polish nationalism. The Polish extreme nationalists of the 1930s, the National Radical Camp (ONR), were proudly anti-Semitic, and the anti-Semitism of the current ONR, which led a 60,000 person march in November, is thinly veiled when it’s veiled at all.

Modern Polish nationalist media has a well-documented history of anti-Semitism. In the debate in Polish media over the “Polish death camps” law and Jewish reactions, many anti-Semitic comments have been made, including “Poles, we are at war! We are at war with the Jews! Not for the first time in our history.”

Fortunately, the leader of the Law and Justice party, Jaroslaw Kaczynski, who ultimately determines its policies, clearly rejected the anti-Semitic remarks in moral terms: “One may say that today the devil is suggesting to us a very evil prescription, a certain serious sickness of the soul, a sickness of the mind – this sickness is anti-Semitism. We must discard it, we must reject it.”

Still, such declarations aren’t enough. As the Polish Jewish community stated in its open letter, “It is unacceptable for Poland’s leaders to merely state that anti-Semitism is wrong without recognizing publicly that it is a dangerous, growing problem in our country today. We receive authorities’ inaction as tacit consent for hatred directed toward the Jewish community and call upon Polish leadership to punish those whose actions threaten our well-being.”

Whether modern Polish nationalism can exist with sensitivity to Jewish concerns and without anti-Semitism is an open question. The democratic backsliding of the Law and Justice party (which have caused it to be the first European Union member state to be subject to an Article 7 “rule of law” infringement investigation by the European Commission) and its xenophobic policies on migrants, do not portend well.

We wish to see the best relations possible between the Polish government and people and the Jewish community, including the State of Israel, but we will always be vigilant about anti-Semitism and insist on respect for the victims of the Holocaust.