I Was Alyssa Alhadeff’s Camp Counselor. No One Should Have To Go To 4 Funerals In One Day. 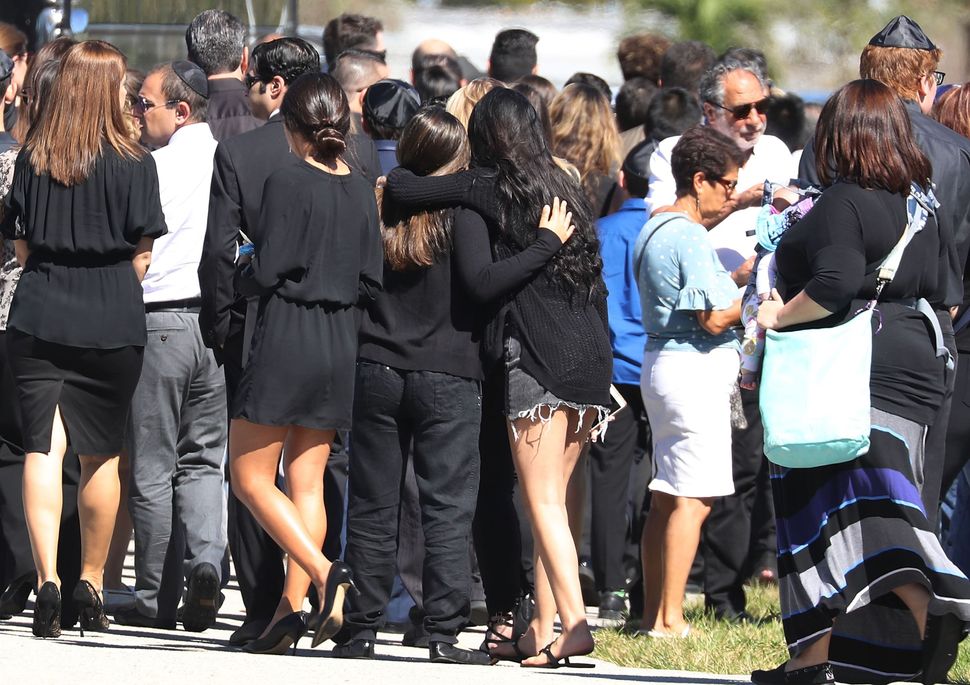 Standing in the cemetery, a heavy quiet suffocated the hundreds of mourners of Alyssa Alhadeff. Not a sound could be heard, not even the cicadas, with their ever-present chirp in the Florida humidity, made a noise.

Then, the thump of dirt on a box too hollow. Thump. Thump.

Then quiet again, followed by the scraping of shovels in the dirt, moving in rapid succession.

An hour after the family left, we were still in the cemetery, yards away. Six of us stood in a circle as one of our campers yelled through her tears: “How can I believe in God anymore? I was sitting there and praying and praying and it didn’t work. He still came in and shot them.”

What could we do except nod our heads and shed tears with her?

Three hours after the funeral began, still we stood at the cemetery. We were the last ones. The five counselors present approached the grave, now completely filled in and covered by two large wreaths of white flowers. She had been reduced to numbers: a date of entombment and a plot number, her body no longer with us, but memories of her entirely too fresh. We stood there, arms around each other, shedding our tears at the incomprehensibility of the scenario.

Twenty four hours before, I was sitting in my bed in Washington D.C., 1,031 miles away, on the phone with one counselor and texting two others.

“Do you know when the funeral is?”

“Have you been in touch with anyone else?”

“Can you make a flight?”

“If I fly down, can we drive together?”

Through the shock and horror, we became camp staff again, making logistical arrangements to be with each other.

Being a camp counselor is not just a 24/7 job during the summer. It is a 24/7 job every day of the year. And not a moment has gone by since Friday, February 16, when I haven’t been thinking of my campers. And not just Alyssa.

The hardest part, harder than finding flights, making arrangements, and attending the funeral, is hugging my campers knowing nothing I can do can protect them or make them unsee what they witnessed.

We held each other tight, campers and staff, trying to hug all of the emotions that words cannot express. More than the “I’m so sorry,” “I can’t imagine what you’re going through,” and “we will always be here for you,” the hugs communicated that all we could do was hold each other tight, our words inadequate to express the love we feel for each other and the pain of knowing their innocence was shattered too early.

I spent my summer creating programs about Jewish identity and Tikkun Olam for these campers. I tried to teach them that while the world is broken, we can and must fix it. I tried to provide a space where they could explore issues they were passionate about and recognized the individual power they have to fix their communities.

Six minutes had the potential to shatter that summer’s worth of work.

My campers attended four funerals that day. But at each one, they held each other. They checked in on each other and came together. Five hundred miles away, in Atlanta, others attended Shabbat services, finding comfort in the community we built together. The staff came together, not just to support our campers, but to embrace the community that had raised us. All of us, together, demonstrating the power to build in the aftermath of witnessing the power to destroy.

At the funeral, the rabbi who delivered the eulogy pointed us to a verse from that week’s Torah portion, Terumah: Va’ya’asu li mikdash v’shachanti b’tocham: And let them make Me a sanctuary that I may dwell among them (Exodus 25:8). When God is hidden from us, when we cry out in anguish searching for God, we must build a sanctuary. He told us that we build sanctuary through doing mitzvot and supporting one another.

Even though the road to recovery is long, and the event will forever impact us, we at URJ Camp Coleman, and as Reform Jews, are building a mikdash. We support each other, embrace each other, and together, are rebuilding our world. Our acts of loving kindness will bring God back even when God is hidden. And if that isn’t tikkun olam, then I don’t know what is.

Aaron Torop is a senior at American University, pursuing a double major in Jewish Studies and Political Science. He was a camper, counselor, and programmer at URJ Camp Coleman.

I Was Alyssa Alhadeff’s Camp Counselor. No One Should Have To Go To 4 Funerals In One Day.