Is Jared Kushner’s Leap To Power A Jewish Success Story — Or A Tragedy? 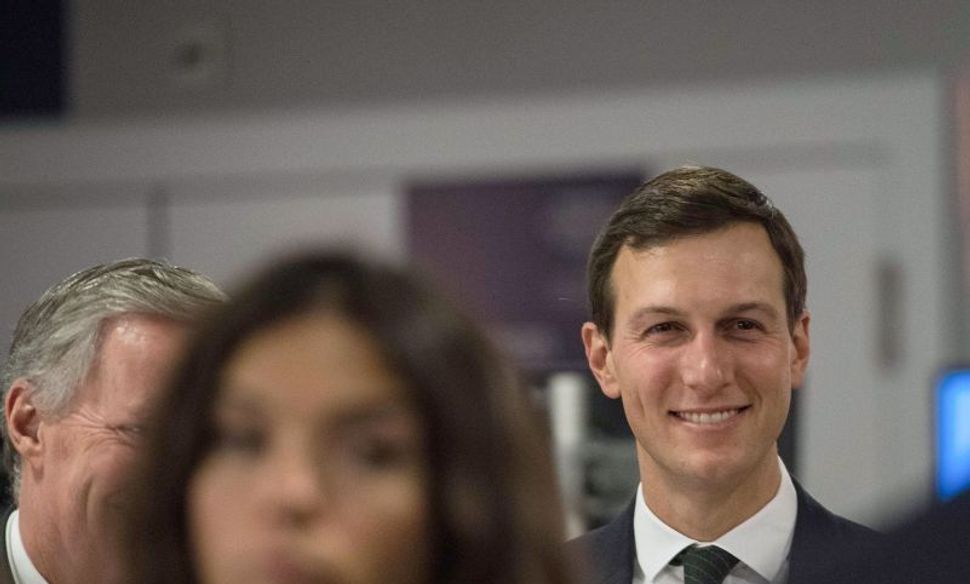 Jared Kushner is in the news again. This week, The New York Times reported that, in his role as a White House adviser, he met with financiers who went on to invest in the family real estate business, in which he retains a large stake. Not to be outdone, The Washington Post reported that foreign officials have discussed using Kushner’s financial entanglements, and ignorance of public policy, to win favorable treatment from the Trump administration. To top it all off, Kushner — after repeatedly making false statements on his financial disclosure forms — this week lost his top-secret security clearance.

The interesting question isn’t why Kushner is running into trouble; given that he’s a political neophyte with a Trumpian habit of intertwining his pecuniary interests with the country’s, it’s entirely predictable. The interesting question is why Kushner holds his job in the first place. The answer says something revealing — and disquieting — about the changing status of American Jews.

Kushner is hardly the first American Jew to enjoy an exalted position in the federal government. But in the past, officials who reached his level of influence almost always did so after careers of genuine achievement. Think of Louis Brandeis, a brilliant student from a modest immigrant family who by the time Woodrow Wilson appointed him to the Supreme Court was already the most famous legal opponent of monopoly capitalism in the United States. Or Walt Rostow, who won a scholarship to Yale at age 15 and went on to become a professor at Massachusetts Institute of Technology; there he became one of America’s most influential modernization theorists before entering the Kennedy administration and ultimately serving as Lyndon Johnson’s national security adviser. Or Henry Kissinger, a refugee from Nazi Germany who graduated Harvard summa cum laude and went on to run Harvard’s Defense Studies Program before becoming Richard Nixon’s most influential foreign policy adviser. Or Lawrence Summers, who won the John Bates Clark Medal as the greatest American economist under the age of 40 before entering the Clinton and then Obama administrations. Or Ruth Bader Ginsburg, who overcame both anti-Semitism and sexism to become one of the most prominent legal advocates of women’s rights before Bill Clinton put her on the Supreme Court. Or even Rahm Emanuel, who was already a veteran political operative and a former congressman by the time Barack Obama named him chief of staff.

Not every powerful American Jew in government grew up as an outsider. Franklin Roosevelt’s treasury secretary, Henry Morgenthau, was the son of a diplomat and attended Phillips Exeter. Clinton’s treasury secretary, Robert Rubin, enjoyed a privileged upbringing as well. But, overwhelmingly, the American Jews who have ascended to top Washington jobs have done so after successful careers in either academia, law, business or politics itself. And, overwhelmingly, they have been qualified for their government jobs. Their ascents may not have been fully meritocratic. But none of them have been anti-meritocratic. Until Jared Kushner’s.

Kushner is among the most influential people in the United States government for one reason above all: his class. He was an undistinguished student in high school but won admission to Harvard after his real estate mogul father pledged to donate $2.5 million to the university and arranged for two sitting U.S. senators to contact its admissions office on his son’s behalf. “There was no way anybody in the administrative office of the school thought he would on the merits get into Harvard,” a former official at Kushner’s high school told the journalist Daniel Golden.

At Harvard, Kushner joined the Fly, one of the all-male “finals clubs” that, according to a New York Times feature, “remain potent symbols of privilege, anachronistic and out of place on an increasingly diverse campus.” At the age of 19, Kushner bought seven residential buildings in the Boston area for $9 million and served as vice president of 10 of his father’s companies. After Harvard he enrolled in a joint law and business program at New York University, to which his father had recently pledged $3 million. At age 25 he bought a newspaper. He was introduced to Ivanka Trump, another heir to a real estate fortune, by Rupert Murdoch’s then-wife, Wendy Deng. And now, because Ivanka Trump’s father is president — and because Kushner and his father-in-law get along — he’s among the most politically powerful people in the United States.

None of this makes Kushner a bad person. But his rise is a case study in how extreme wealth and power reproduces itself, irrespective of ability, in an America in which upward mobility is increasingly a myth. Nothing he has done prepared him even remotely for his vast governmental responsibilities, which include America’s relationships with Saudi Arabia, Mexico, Canada, Israel and the Palestinians, and a host of domestic issues that include prison reform. According to media profiles, Kushner never even expressed much interest in domestic or foreign policy while in school.

And since joining the government, he has displayed a predictable, yet nonetheless alarming, ignorance of the subjects he oversees. Discussing the Israeli-Palestinian conflict with congressional interns last summer, Kushner declared that “the variables haven’t been changed much” in “the last 40 or 50 years” — a period of time in which the Jewish settler population in the West Bank has risen from zero to close to 400,000. He went on to complain that people were always trying to explain the conflict’s history to him. “We don’t want a history lesson,” he told the interns. “We’ve read enough books.” In fact, it’s a virtual certainty that when it comes to Israel and the Palestinians, Kushner hasn’t read enough books. More frightening is that he doesn’t think he needs to.

Kushner uses his ignorance as an alibi. In a statement to the Senate Intelligence Committee, he defended himself against charges of collusion with the Russian government by suggesting, essentially, that he didn’t know enough about Russia’s government to knowingly collude with it. Asked about reports that during the transition he had suggested to Russian Ambassador Sergey Kislyak that they establish a back channel using Russian facilities, apparently to evade monitoring by U.S. intelligence, Kushner told the Senate Intelligence Committee that he had “limited knowledge about” Kislyak and “could not even remember the name of the Russian ambassador.” He explained away his presence at a meeting with a Russian attorney who claimed to have dirt on Hillary Clinton by noting, “When I got there,” the attorney “was talking about the issue of a ban on U.S. adoptions of Russian children. I had no idea why that topic was being raised and quickly determined that my time was not well-spent at this meeting.” In fact, Russia’s ban on American adoptions was seen widely as retaliation for 2012 U.S. sanctions that enraged Vladimir Putin by targeting people close to him. In all likelihood, what the Russian attorney was talking about was the Trump campaign — in return for Moscow’s campaign assistance — agreeing to lift sanctions. Kushner just didn’t understand. No wonder that, according to The Washington Post, White House officials fear that Kushner is “‘naive and being tricked’ in conversations with foreign officials, some of whom said they wanted to deal only with Kushner directly and not more experienced personnel.” And now that Kushner has lost his top-secret security clearance, his access to one critical source of information about foreign governments is gone. As longtime diplomat Aaron Miller told The Times, “He doesn’t know what he doesn’t know, and now he cannot find out.”

Were Kushner a WASP, this would be less noteworthy. George W. Bush was a child of extreme privilege who, according to multiple sources, didn’t know the difference between Sunnis and Shias months before he invaded Iraq. Trump’s success relies in large measure on his inherited wealth, too, and his ignorance of public policy exceeds even Bush’s.

Anti-meritocrats aren’t new in American politics. But until recently, it would have been almost impossible to imagine one of them being a Jew. That’s because Jews, even when they amassed wealth, were too culturally distant from the nation’s most powerful families. Yale only eliminated its quotas on Jews in the early 1960s. As late as the 1970s, Richard Nixon — despite his reliance on Kissinger — baited his aide with anti-Semitic remarks. Even a generation ago, it’s unlikely that Ivanka Trump would have married a Jew, let alone one who intended to remain Orthodox. Their marriage — like Chelsea Clinton’s to Marc Mezvinsky — is evidence of the diminishing divide between Jews and the WASP elite.

One reason the divide is receding is that American Jews and American WASPs have more in common. Jews are not the meritocratic strivers we once were. William F. Buckley, who attended Yale in the late 1940s, wrote about seeing its Jews studying in the dining hall Saturday nights while other students were going off to parties. Those days are gone. American Jews still care about academic achievement. But not as fervently. We don’t need to; we’re far better able to work the system. What Nick Lemann wrote more than two decades ago is even more true today:

“Even by my school days, the academic hunger had begun to wane. By now, it is barely producing a pulse, except among Jews who are within one generation of the immigration cycle. Jews have not become notable as academic underachievers. But something is gone: That old intense and generalized academic commitment, linked to sociological ambition, is no longer a defining cultural characteristic of the group…What has replaced it is a cultural insider’s sort of academic preoccupation: a task-specific, in-the-know concern with successfully negotiating the key junctures — mainly, college admission. Jews are now successful people who want to move the levers of the system (levers whose location we’re quite familiar with) so as to ensure that our children will be as successful as we are. This is quite different from being yearning, not-successful-enough people who hope, rather than know for sure, that study will generate dramatic upward mobility for our children.

Kushner is an extreme case, of course. But in comparison with 50 or even 25 years ago, Jews are more likely to benefit from the anti-meritocratic aspects of American life: family connections, unpaid internships, private schools, legacy admissions, inherited wealth, the kind of cultural polish that Ginsburg and Kissinger didn’t gain growing up in Brooklyn’s Flatbush and Manhattan’s Washington Heights in the 1940s.

Kushner exposes the gap between the way many American Jews still see ourselves — as scrappy, embattled outsiders — and the reality of our cultural and class position in America in 2018. We have reached the point in our history when even an absurdly unqualified, wildly ignorant Jew can be among the most powerful people in the United States. That’s an achievement and a tragedy at the same time.

Peter Beinart is a senior columnist at the Forward and an associate professor of journalism and political science at the City University of New York. He is also a contributor to The Atlantic and a CNN political commentator.

Is Jared Kushner’s Leap To Power A Jewish Success Story — Or A Tragedy?